There are still deals in today’s market.

In fact, you can find that in a large portion of the overall market. That’s because small-cap stocks have been lagging their larger peers.

While the S&P 500 Index has hit new all-time highs, small caps have yet to fully recover from their March bottom.

Small caps are now trading at one of the largest discounts to large caps in decades. It likely won’t stay that way for long, though.

Small caps could soar much higher to try and close the gap. That means big gains and big outperformance could be on the way.

There are many ways you could look at a valuation gap between areas of the market. Today, we’ll use the price-to-book (P/B) ratio.

This gives us a quick look at how much you’re paying for a company’s assets. The higher the P/B ratio, the more expensive the stock is. And a spread in P/B ratios between assets can highlight a valuation gap.

Even more, this is one of the largest gaps we’ve seen in recent years. Take a look… 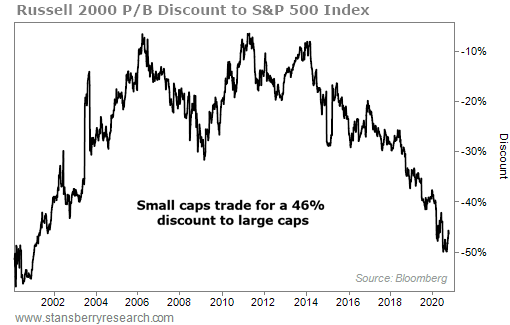 The discount of small caps to the S&P 500 sits at 46% based on this measure. And the gap this year is larger than any we’ve seen since 2001.

You’ll probably notice that small caps have historically traded at a discount to the S&P 500. There isn’t even a 0% line on the chart above, which means they’ve never been more expensive than large cap stocks over this date range.

That’s fine though. Because the discount is usually much smaller than what we see today.

Since 1999, the average P/B discount has been around 27%. And from 2004 to 2013, there were several years when that discount was even less. So while we can continue to expect a discount, we shouldn’t expect one this large to last long.

Small caps will likely break back out to new highs in the coming months. And they will likely begin outperforming larger stocks in the process, closing the valuation gap.

If you want to buy small caps, you can easily do so with the iShares Russell 2000 Fund (IWM). This simple fund tracks the Russell 2000 Index, the benchmark for small-cap stocks.

These stocks are incredibly cheap today compared to the overall market. But history tells us that this won’t last. Expect a big move in these stocks in the coming months.