Snowflake (NYSE:SNOW) made some noise when it arrived on the exchange just over a month ago. On Sept. 16, SNOW stock went public, and demand for the new issue was robust. This has helped jack its valuation through the roof, as demand far outweighed supply — and still does.

Let’s put it this way. The company had planned to hit between $75 and $85 a share. That would value Snowflake at more than $21 billion. Then the IPO range started drifting higher, and then higher again.

Soon, the IPO price had climbed all the way to $120 a share. Here, the company sported a market capitalization of $33 billion. How did this happen?

No Worries on the SNOW Stock IPO

Evidently, there were no worries on the IPO from investors. How do we know that? Because SNOW stock didn’t see its IPO price drift up from approximately $80 to $120 and open near the latter.

Instead, on the first day of trading, shares opened at $245 apiece, more than double the already elevated IPO price.

Helping drive that price even higher were some of the investors, with well-known companies taking notable stakes.

So, hats off to Snowflake. The company runs a great data business, and it’s being rewarded with this stellar IPO action. But that doesn’t make it an automatic buy. The problem with most IPOs is the float. In other words, these companies tend to offer just a small sliver of stock — i.e. supply — which is far below current demand.

For instance, if there are 1,000 investors wanting to buy SNOW stock and the company only sells 100 shares, that creates a buying frenzy for the stock. And when big investors step in and gobble up even more of that float, then there’s even less supply to go around. Say two investors buy 30 of the shares in that hypothetical. That leaves just 70 shares for the other 998 investors. No wonder the price skyrocketed.

It’s important to remember that a low float doesn’t make the company bad or the stock one to ignore. In fact, it’s quite the opposite with this business. However, it’s rare for a company to hit the ground running, exploding higher in its IPO and never looking back. 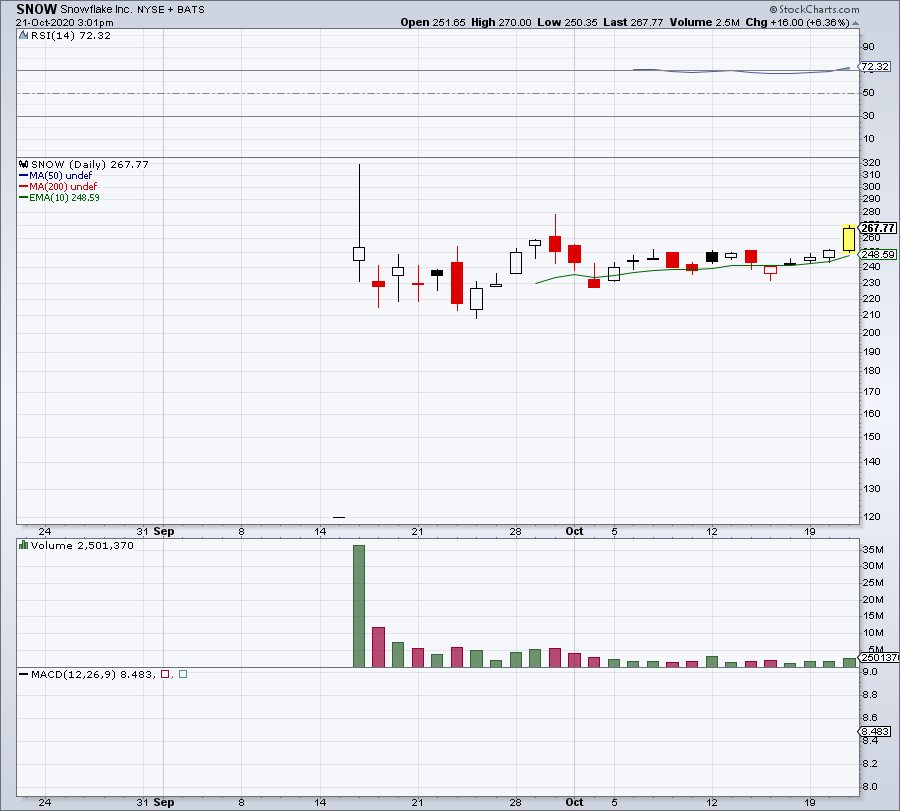 Eventually, we should get a decent pullback in this name and that may be the best opportunity to swoop in on shares. At the very least, this stock is worth observing over the next couple of months to see if a better buying situation arises.

While the growth rate is impressive — and it shouldn’t be long before Snowflake is running at the annual $1 billion revenue mark — investors can see the issue I’m about to raise: valuation.

Normally, I’m not one to be a stickler on valuation. A stock is worth what someone is willing to pay for it. Valuation is a key reason many investors miss out on some of the best stock holdings. But that doesn’t mean valuations are irrelevant — it just means they are not the only metric to follow.

At its current valuation, SNOW stock trades at 296 times trailing revenue and 132 times current sales. That is certainly stretched in most investors’ minds, and that’s putting it lightly.

Does that make Snowflake stock one to avoid? Not necessarily. However, I would argue that it makes SNOW stock one to wait on.

When we look ahead, the valuation becomes more reasonable. While estimates are bound to change, analysts expect $1.07 billion in sales next year and $1.75 billion in the following year (fiscal year 2023).

That last figure is what’s keeping bulls interested. At about 70 times forward revenue estimates and almost 43 times FY 2023 estimates, SNOW stock seems more reasonable. I didn’t say cheap — but if that type of growth comes to fruition, one can see where the hype comes from.

In short, this has all the hallmarks of a secular growth giant. But let’s see if we can’t get a better price — and a lower valuation — in the months to come.