If your investing philosophy is anything like mine, then you are constantly on the outlook for a bargain. In today’s bifurcated market, financials in general are a very fertile market to look at for attractive undervalued stocks.

Furthermore, the life and health insurance companies, appear to be the most attractive subsector under the financial sector.

I recently did a search of the life and health insurance subsector and came up with 25 names that I considered the highest quality in the overall subsector.

All of them carried investment grade credit ratings of BBB+ or better – except for one.

The one exception is Unum Group (UNM) which carries a one notch below investment grade credit rating from Standard & Poor’s of BBB. But perhaps most interestingly, it appears to be also the most undervalued company in the group, despite strong fundamentals.

Since coming out of the Great Recession, Unum Group has consistently grown earnings at approximately 6.72% per annum, and as I will illustrate later, their dividend by almost twice that rate. Yet despite these strong operating results, Mr. Market has crushed the company’s stock price. Since November 30, 2017, just short of 3 years, Unum Group’s stock price has fallen 67.3% from $56.62 to $18.54 on October 13, 2020’s close.

In contrast, the company’s dividend has increased from $0.86 a share in 2017, to $0.98 a share in 2018, to $1.09 a share in 2019, and on track to pay $1.15 for 2020. That is an average dividend growth rate of 12.3% which brings a current yield to an extremely attractive 6.15%. Moreover, today’s current yield represents a major indicator of just how undervalued this company is. Historically, the company’s dividend yield would be in the 2 ¼% to 2 ½% range when the company was undervalued. Of course, a blended P/E ratio of 3.53, implying an earnings yield 28.33%, are further indicators of just how inexpensive this company is. I will be covering this in greater detail later in the video portion, you do not want to miss it. 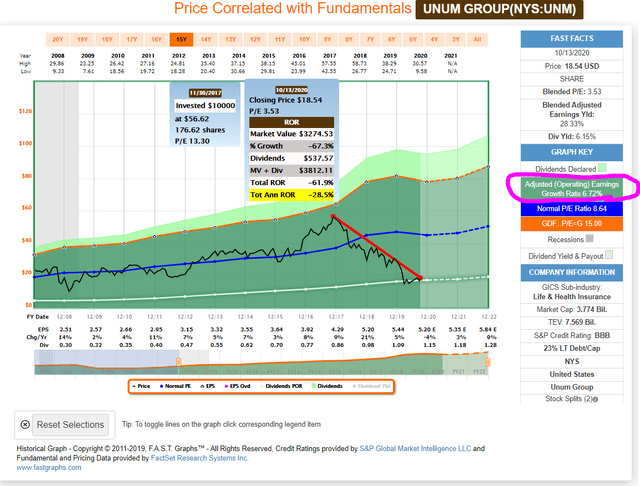 Unum Group is a provider of group and individual income protection insurance products in the United States and the United Kingdom. It is the largest domestic disability insurer, with the majority of premiums generated from employer plans. The company also offers a complementary portfolio of other insurance products, including long-term care insurance, life insurance, and employer- and employee-paid group benefits. The firm markets its products primarily through brokers.”

Unum Group is headquartered in Chattanooga Tennessee and the current company was formed after the June 1990 merger of Provident Companies Inc. and Unum Corporation. Even though the company is the largest domestic disability insurer, it also provides long-term care insurance. Unum Group operates under 4 segments, the largest of which is Unum US which represents over 64% of 2019 premiums. Colonial Life is their 2nd largest segment provides life, cancer, critical illness and other insurance protections represented 18% of 2019 premiums.

The 3rd largest segment is Closed Block representing 11% of their 2019 premiums. This business primarily occurred from 1994 to 1998 offering individual disability insurance. However, since 2004 the company no longer sells new policies in this segment. As a result, performance in the segment has been very disappointing and creates a headwind in the minds of many investors.

Unum Group’s smallest segment which represents approximately 6.75% of their 2019 premiums is Unum International, which was previously known as Unum U.K.

The positives I see regarding Unum beyond its obvious low valuation is that the company’s two largest operating segments – Unum US and Colonial Life – have both been generating consistent growth in recent years. The company also has a solid balance sheet and a solid capital position. Additionally, the company has generated shareholder value through both strong dividend increases and share buybacks.

Total revenue growth since 2013 has been rather anemic at approximately 2 ½% per annum on average. Nevertheless, total revenues have been growing. This is important as I will illustrate in a moment.

Since 2013, Unum Group has been reducing their share count (buying back shares) at an average annual rate of approximately 4%. However, the reader should note that the company has been buying back their shares at very low valuations, especially since 2017.

Consequently, even though some people consider share buybacks financial engineering, it has allowed revenues per share to grow at approximate 6.6% per annum since 2013. Remember, as previously shown, the company’s total revenues have also increased although at a lower rate. Nevertheless, I find it encouraging to see revenues, earnings, cash flows and dividends all increasing on both a per-share and total level.

From the initial research I have conducted, the biggest negative that I see cited are a rise in total benefits and expenses the past few years that have allegedly generated margin contraction. However, from what I see, the company is still growing revenues higher than expense increases. Increasing debt levels have also been cited, which I consider an overblown worry considering the rather low debt to capital ratio of the company is operating under and the low cost of interest today. The following shows that total debt has increased but the majority is long-term debt, and therefore, I consider it manageable. 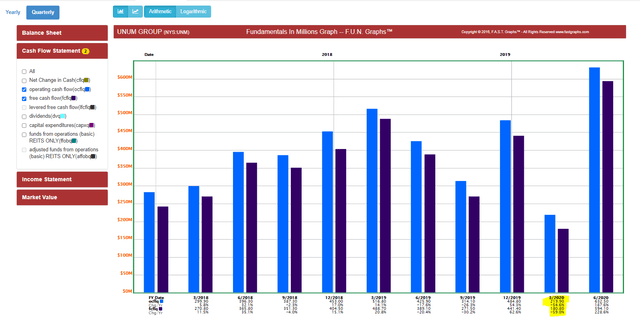 If a picture’s worth a thousand words, then a video is certainly worth many many more. Therefore, I offer the following video where I clearly articulate the extreme undervaluation relative to the strong fundamentals underpinning Unum Group. Additionally, I will look at forecast earnings and EBITDA and run calculations of potential future returns that the company can deliver to investors going forward.

Although Unum Group is primarily a story of extreme undervaluation, it is also a high-quality company with an extremely high current dividend yield relative to the average company. Nevertheless, this is even though the company’s payout ratios are extremely low, and therefore, have ample room to grow.

Finally, investors should not reject this stock because their historical performance has been subpar without simultaneously recognizing the impact that today’s low valuation has had. As I illustrated in the video, when you can invest in this company at low valuations and higher than normal dividend yields, the rewards have been quite strong. Because as I have often stated, measuring performance without simultaneously measuring valuation is a job half done.