Investors are finally shedding their fears…

They’ve begun to move money out of safe assets and into riskier ones. The total so far has been a massive $385 billion. But that’s only a fraction of what could move in the coming months.

We could see $1 trillion or more rush into stocks as this trend continues.

And it’s why I believe the recent stock boom will continue in the months ahead.

Assets are steadily moving out of safe money market funds, and back into the markets.

This comes after a massive increase in money market mutual fund assets… which was driven by the COVID-19 crash and continued fears.

Investors were wary of the economic destruction that pandemic-related shutdowns would bring. They dumped stocks and fled to the safety of the dollar.

According to the Investment Company Institute (“ICI”), roughly $1.2 trillion flowed into money markets from early March into mid-May. That brought the total amount of assets to roughly $4.8 trillion. Take a look… 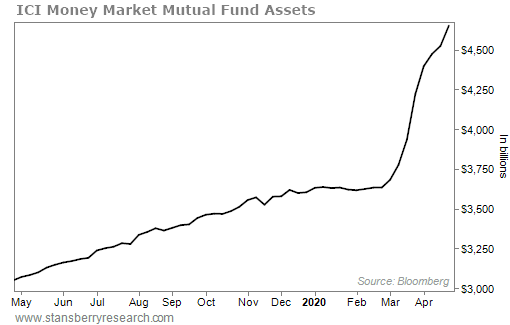 Those funds began to trickle out in early June. As the market continued to rebound, investors grew tired of watching their money do nothing. They wanted to get back in and capture some of those gains.

Money has been flowing out of those funds for 15 of the last 18 weeks, including a streak of eight straight weeks. The total value of assets has fallen by roughly $385 billion. That’s almost one-third of the assets that money markets held from March through May.

You can see it more clearly in the chart below… 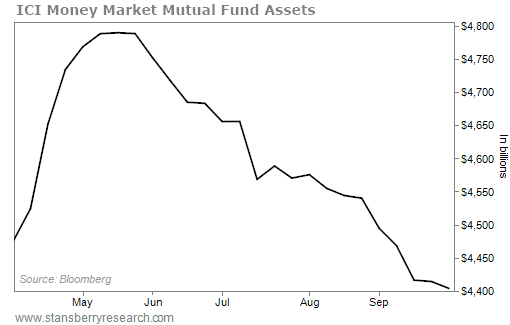 This is only the beginning, though. As of September 30, more than $4.4 trillion worth of assets was still parked in those money market funds.

That means that around $1 trillion would have to flow out of them to get back to levels we saw this time last year. And I expect the recent trend to continue, with more and more money flowing out of safe assets and into stocks.

This situation feels very much like the market environment we saw during the financial crisis. Then, like now, investors were scared. They ran toward the safety of the dollar and Treasurys. It took massive intervention from the Federal Reserve and Congress to turn the economic picture around.

On March 13, 2009, investors started moving their money out of money market mutual funds after the financial crisis. That was right around the beginning of the last bull market run.

It seems crazy to say it. But given that $1 trillion is likely headed for stocks in the coming months, the recent rally could be just the beginning of a major rally.

Even if not, this trend should continue to provide steady support for the S&P 500 Index. And it’s one reason you need to be long stocks today.