How could anyone want to own bonds today?

You’d have to be a fool… right?

Interest rates have fallen near record lows. So bonds pay less than ever. And they’ll need rates to fall to even lower lows in order to increase in value.

It seems like a foolish move to recommend bonds. But there’s a problem… That’s what everyone thinks.

The futures market in particular absolutely hates the idea of owning bonds right now. As I’ll show, these traders are as bearish as they’ve ever been… And that makes this seemingly foolish bet a smart move.

They expect long-term bond prices to fall. But this trade has gotten so crowded that the opposite is near certain.

You see, sentiment extremes often flash near breaking points in the market.

When traders all pile into one side of a trade, it often signals that a change in the trend is right around the corner.

Today, futures traders are extremely bearish on long-term bonds. An easy way to see this negative sentiment is through the Commitment of Traders (“COT”) report for bonds.

The COT report is a weekly survey that tells us what futures traders are doing with their money. And when they all bet in the same direction, they’re usually wrong.

Today, futures traders are all betting against long-term bond prices. Take a look… 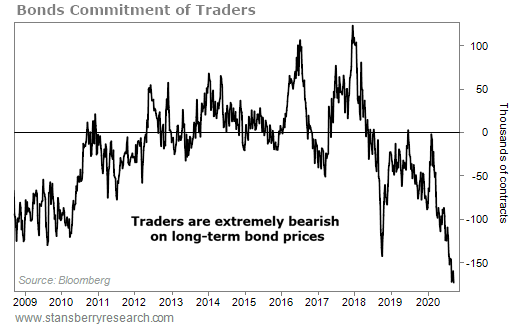 Let’s look at the iShares 20+ Year Treasury Bond Fund (TLT) to see what I mean. It’s an easy way to own long-term bonds.

In August 2009, traders wanted nothing to do with bonds. We were in the depths of the financial crisis, and even bonds were a hated asset. Then, long-term bonds rallied 25% over the next year.

We saw a similar example play out in 2017. TLT was down 16% from mid-July 2016 through mid-March 2017. Bonds were in constant freefall for about nine months, and futures traders were betting that trend would continue.

That was the wrong bet. TLT rallied 11% to finish the year – another solid double-digit move in long-term bonds.

The last example was even crazier. In 2018, we saw traders betting heavily against bonds. Then, the opposite of what they expected occurred… TLT took off for a 30% rally over the next year.

In short, if futures traders are all betting against bond prices, that means you want to do the opposite.

It may seem foolish to buy bonds today. But history says it’s a smart bet. And TLT gives you a simple way to do it.

According to history, double-digit gains are possible in long-term bonds, starting now.