There’s no official definition of a bubble.

People love to throw around the term when a market or stock is a little overvalued. But I prefer to reserve it for the full-on frenzies… the times when the market has lost its mind.

To be more specific: A stock is in a bubble when there’s no possible future that can support its current valuation.

In other words, does even the most optimistic scenario justify the price you see today?

Right now, we’re seeing a full-blown bubble in one of the biggest winners of the pandemic economy… virtual-conferencing platform Zoom Video Communications (ZM).

You might be tempted to jump into Zoom – if you’re not in already – and go along for the ride. But as I’ll show you, that’s the wrong game to play today…

To get a sense of this bubble, we can forget profits and just look at revenue. Today, Zoom trades at 83 times sales. A mature company trades somewhere between 2 and 4 times sales. The S&P 500 Index, even at its rich valuations today, trades at 2.5 times sales. 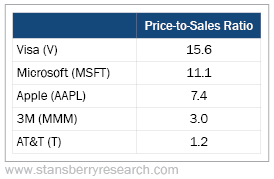 It used to be that 10 times sales was considered a “nosebleed” valuation (as in, very high). But that seems to be closer to the norm for today’s tech stocks. With Zoom at 83 times sales, it’s priced eight times higher than that lofty level.

Can Zoom grow into that valuation? Zoom’s sales have totaled $1.3 billion over the last year, but let’s be generous and consider that it brought in $663 million in the last quarter. Multiply that by four and we’ll give it revenue at an annual rate of $2.6 billion.

The goal here would be for Zoom to mature and eventually trade for 5 times sales. To justify its current market cap near $140 billion, sales need to grow to $28 billion – that’s roughly 10 times higher from here.

Will people spend $28 billion every year on Zoom’s video conferences? The company’s management believes the total addressable market is $43 billion. That sounds extraordinarily high to us.

At that size, it means video conferencing will bring in about as much revenue as Starbucks (SBUX) or Kraft Heinz (KHC). And even if it does, Zoom would have to own more than half the market to capture $28 billion of that $43 billion.

In total, Zoom’s market value is pushing the limit… not just for what it’s worth today – but for what it could ever be worth. Its investors are behaving irrationally.

So here’s the question… Does that mean you run screaming and keep your capital safe somewhere else?

This is a hard game to play. Even if Zoom or its fellow tech stocks do eventually justify their valuations, they will have big drawdowns along the way. At valuations like these, when the stocks lose momentum, they can fall 80% or 90% in a hurry.

Putting a small amount into stocks like these as a speculation can be rewarding. It can also be remarkably stressful.

At the same time, you never want to short a growth stock like Zoom in a bubble. It could easily double or triple again from here before the market comes to its senses.

Trying to figure out what happens next is like trying to ride a wave that’s just too big… The glory of “the big one” doesn’t justify getting dragged out to sea.

Rather, we want to use what we know to earn consistent, repeatable profits.

When will the Zoom bubble end? We don’t know.

Will time keep passing? That we know with 100% certainty. This gets at one of my favorite strategies… selling options.

When we sell options, we are “selling time.” Every day that progresses earns us a better return. If you sell an option and everything stays the same, over time, the value of the option will slowly “decay”… And as option sellers, that means we make money.

We also don’t have to find something with the potential to bubble up. You don’t need to find a stock that will double or triple in the next week… or announce earnings and rise 41% overnight, like Zoom did.

Lastly, the wildness of the broader market means that investors will pay us a hefty price for selling options today.

Now, if you’d put Zoom in your portfolio a year ago, you’d be up more than 500%. That’s great… But it’s not repeatable. A portfolio that returns hundreds of percent in one year will post big losses in others.

Rather, by selling options, we earn our 20% or so, year after year, trade after trade. We don’t have to do much but dodge obvious bubbles and stick to smart businesses.

And 20% a year, compounding over the years, is a better return than Warren Buffett has achieved. That’s the path to sleep-well-at-night wealth.

Bubble or Buffett… Which game would you rather play?