On Friday, the benchmark S&P 500 Index broke down…

It dropped below its intermediate-term trend line – its 50-day moving average (50-DMA) – for the first time in four months.

The trend is still up. But a lot of investors and traders start to worry when stocks fall below this widely followed level.

Last week, though, we told our DailyWealth Trader readers that this pullback could actually be a great buying opportunity…

Timing your trades isn’t always about nailing the exact right moment to get in… If you can simply identify higher- and lower-risk entry points – and take action when your risk is reduced – you’ll give yourself a major advantage in your trading.

With that in mind, the question we’re asking today is, “Is right now a higher- or lower-risk moment to buy stocks?”

To help us answer this question, we looked at similar occurrences in the S&P 500 over the past 50 years.

Specifically, we looked at the S&P 500’s returns following its first break below its intermediate-term trend line in at least three months.

In the chart below, you can see when this happened on Friday… 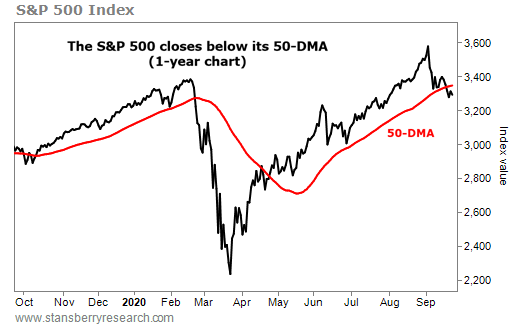 A lot of traders consider a break below the 50-DMA to be a bad sign. But let’s draw our conclusions from the numbers…

Over the past 50 years, the S&P 500 has held above its 50-DMA for at least three months 39 other times. (Friday was the 40th time.) The table below shows how the index performed following the first day that it closed below its 50-DMA…

Those are good odds, especially when we compare them with the S&P 500’s “normal” performance…

You might be surprised to see that the S&P 500’s average and median returns were better than normal after it broke below its 50-DMA across all time frames. The percentage of the time that stocks were up was better after the breakdown, too.

How can we explain this?

These results suggest that one of the best times to buy stocks in a strong market is after a pullback, like when the S&P 500 drops below its 50-DMA… as it did on Friday.

Right now, a lot of folks are worried that stocks are about to start another big decline. That’s a possibility, of course. But as we showed you today, it’s not the most likely outcome.

In the weeks and months following our 50-DMA breakdown signal, stocks were higher across all time frames, on average. And stocks performed better more often than in all market conditions.

Our study shows that rather than this being the time to sell, stocks are likely a good buy today.

It probably doesn’t feel like the right thing to do right now, but if you have some cash on the sidelines, you may want to consider putting it to work. At the very least, don’t exit your bullish positions right now unless they’ve triggered your stop losses.

We can’t promise you that today is the perfect day to buy stocks. But we can tell you – with 50 years of history backing us up – that your risk in the stock market is reduced. And generally, that’s the time to buy, not sell.

Our advice for stocks traders and investors right now is to stick to your stop losses and to stay long.