The big opportunity in the market today lies with value stocks…

So there are 10 billion reasons to make Wells Fargo (NYSE: WFC) your next investment.

In the company’s second quarter earnings call, CEO Charlie Scharf revealed that he believes the company will be able to cut $10 billion of expenses over the next couple of years.

This will have a huge positive impact on earnings.

What’s more, it speaks volumes that Scharf will publicly quantify how much he thinks he can reduce expenses.

His $10 billion figure is now a public goal post, so you’d better believe he wouldn’t mention it if he didn’t think it was achievable.

But even before hearing that, I was already very bullish on Wells Fargo…

This stock represents the kind of asymmetric opportunity that I always search for as an investor.

By asymmetric opportunity, I mean this:

There Is Only One Way to Go

All of them have taken huge loan-loss provisions to deal with the bad loans that the pandemic will create. Wells Fargo took provisions of $3.8 billion in the first quarter and $9.5 billion in the second quarter.

These loan-loss provisions have crushed 2020 earnings for the bank.

But here’s the thing…

At some point – I expect by the end of this year – the banks will have done enough provisioning. Then, Wells Fargo’s will pop back up toward where it runs in a normal economy.

And we don’t have to guess that figure – we know what it is.

Over the last four years, here’s what Wells Fargo’s normal income per share has been:

On a normalized basis, even in this extremely low interest rate world, Wells Fargo can earn close to $4 per share per year.

With a share price of $25, that tells me Wells Fargo is trading at just 6.25 times post-pandemic earnings.

Now About That $10 Billion of Expense Cuts…

I just showed you that Wells Fargo is capable of earning $4 per share post-pandemic.

But that $4 per share figure hasn’t factored in the $10 billion of expense cuts that CEO Scharf thinks are achievable.

Wells Fargo has roughly 4 billion shares outstanding. That means a $10 billion reduction in expenses would add $2.50 per share to earnings.

That means a couple of years from now, Wells Fargo could very well be earning its normal $4 per share plus an additional $2.50 per share realized from the $10 billion of cost savings.

And if you apply the normal 10 times price-to-earnings multiple to $6.50 per share of earnings, I see the shares of this company eventually trading at $65.

But there could be even more upside…

Between 2014 and 2019, Wells Fargo traded for more than 12 times earnings almost all of the time (see the chart below).

At a 12 times earnings multiple, my $6.50 of projected earnings for Wells Fargo turns into a $78 share price.

That is more than a triple from where we are today. 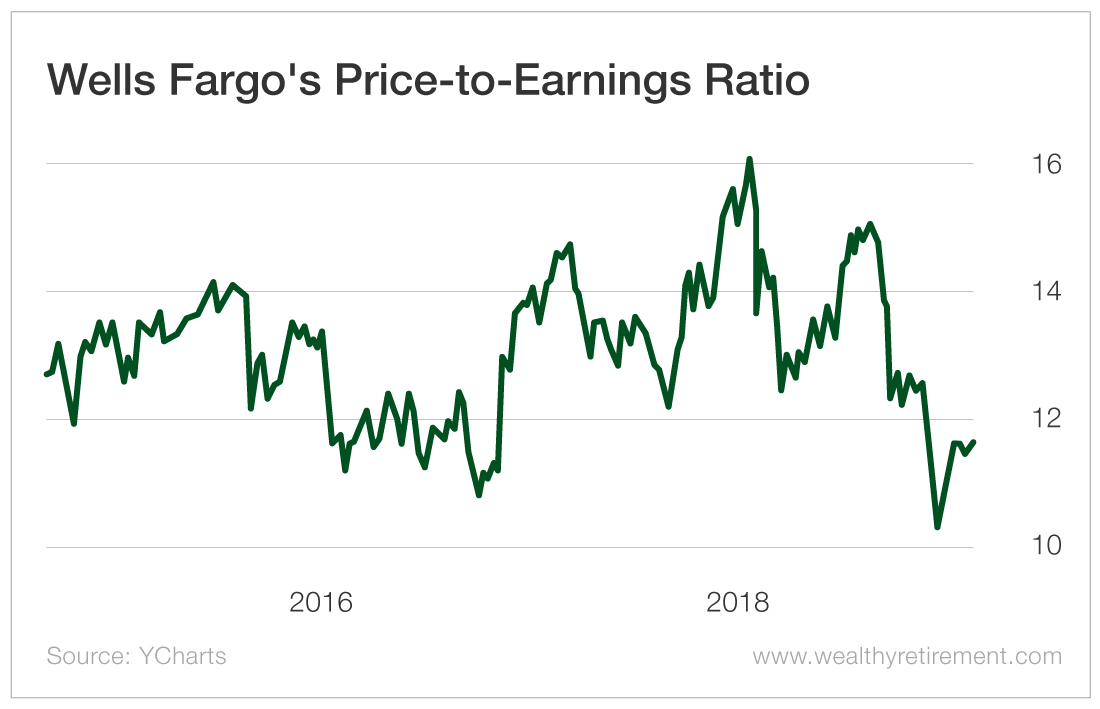 Now for the downside…

As you are likely aware, Wells Fargo has deservedly received a ton of bad press over the past few years – first for a fake accounts scandal and then this past July for a sizable dividend cut.

The bank has paid billions of dollars in fines in response to the scandal and has also had an “asset cap” restriction imposed by the U.S. Federal Reserve.

That restriction put a limit on how much Wells Fargo could grow its balance sheet through lending. It has been costly to earnings… I’ve seen estimates that suggest the bank has lost out on $4 billion because of it.

But today, all of the top management who were at Wells Fargo during the scandal are gone. And at some point, possibly quite soon, that asset cap restriction will be removed.

It would be good for the economy if it were removed. We need this megabank operating at full capacity.

When that asset cap is removed, it will be a major catalyst for Wells Fargo to start a slow journey to a much higher share price.

With little downside and lots of upside, Wells Fargo is my favorite value investment today.