Jerome Powell has one goal in mind as the Federal Reserve chairman… to kickstart our economy at any cost.

I explained what was happening to DailyWealth readers in July. Powell had recently announced plans to pump up to $6 trillion into the U.S. economy.

Now all those dollars floating around are helping companies ride out today’s pandemic.

And with record-low interest rates, businesses can take out cheap debt to stay afloat.

I knew that would lead to a massive boom in asset prices. And it has, with stocks soaring from the March lows to new all-time highs.

That trend is playing out exactly as I expected. It’s why I believe the latest pullback will give way to even higher highs. But there’s another side effect to Powell’s massive monetary stimulus…

It’s a bear market that few are paying attention to… but one with huge implications.

Pumping more dollars into the system doesn’t just cause asset prices to rise. It also puts pressure on the value of the U.S. dollar.

When you increase the number of dollars available, it means those dollars are worth less. It’s the other side of easy-money policies. And it causes the value of the dollar to fall.

Not surprisingly, that’s exactly what has happened since the Fed started pumping money into the system in March. Take a look… 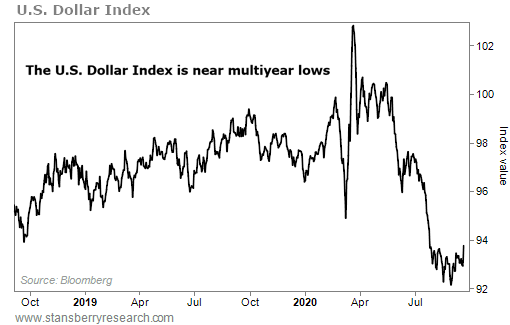 You can see that the index peaked above 102 in March. Since then, it has absolutely crashed… falling more than 10%.

That might not seem like much. But major currencies tend to move at a glacial pace. A 10%-plus decline over a couple of years would be news… For it to happen in less than six months is shocking.

This decline likely isn’t over yet, though. Powell put even more pressure on the dollar last month when he gave a speech at the Kansas City Federal Reserve Bank. He made it clear that the easy money is here to stay.

You see, the Federal Reserve has historically targeted 2% inflation. Since we’ve had little inflation for years, Powell’s new plan is to spark inflation above 2%. The Fed wants to overshoot the old target. And it plans to keep inflation above 2% for a while.

All this means the Fed will keep easy-money policies in place… for as long as it takes. And that will put more pressure on the U.S. dollar along the way.

This has already caused a bear market in the dollar… one that few realize is happening. And it’s nearly certain to continue.

As an investor, you have to take advantage of what’s going on. There are plenty of ways to do that… But one of the best ways to profit from a falling dollar is emerging market stocks. Tomorrow, I’ll show you why.