If you lived in a reasonably large city in 2018, you witnessed an invasion.

Oftentimes, people in dense cities only have to make a short trip – less than a mile or so – to run an errand, meet someone, or get something else done. From the perspective of getting around a city, grabbing a scooter for a quick, cheap ride made sense.

But all of the competing scooter companies – like Bird, Lime, Scoot, Spin, and Jump – forgot about one thing in their business plans… People tend to be jerks.

If you’ve ever wondered how scooter companies left scooters on the street without losing them, the answer is that they didn’t.

The scooters got smashed, stolen, and damaged at an amazing rate.

Lots of folks who objected to the scooters even destroyed them out of spite.

As you can imagine, this was a major problem for the companies. But it isn’t unique to scooters…

This problem runs rampant in many disruptive technology companies. And as I’ll show today, if you want to invest successfully in the tech sector, you need to watch out for this fatal flaw…

All of these scooter companies – aside from Uber Technologies’ (UBER) scooter division – are private, venture-funded startups, so they don’t share full data about their internal finances. But here’s the best we can piece together – and we’re generalizing across the industry…

Scooter rides are cheap. It can cost something like $1 to unlock a scooter and another $0.15 per minute of a trip. Bird reported last year that it earned an average of $4.27 per ride.

The typical scooter got somewhere between three and four rides per day, so revenue would be about $15 per day.

At a cost of around $550, a scooter needs to ride for 37 days before it pays back its cost.

But scooters don’t last even that long. Some datasets show that the average scooter lasts just 28 days before it dies (or is killed).

And that’s before the costs of credit-card fees that facilitate the trip (which are high on small transactions), along with paying people to charge and relocate scooters, marketing, and general administration.

Renting out scooters – as the business stood – just didn’t make sense. This is called “unit economics.” How much does it cost you to produce and sell one unit… and how much revenue does that earn you?

If the unit economics come back negative, you’re going to have a hard time making a successful business. It’s the basic building block of making money.

Bird, as of mid-2019, was burning $100 million per quarter. But venture capitalists were giving it money to continue. As the old joke goes, “Sure, we lose money on every sale. But we make it up in volume!”

The thinking was that making some changes could flip the unit economics to positive. If Bird made its own scooters for a better price, controlled its costs, and beat out the competition so that it could raise prices, maybe it could do well.

This sort of thinking pervades the modern economy. Lose money now, and somehow make it later.

This thinking stems from a few things. First, historically low interest rates mean that these businesses can find the capital injections to keep them from running out of money.

Second, Silicon Valley has been taken in by the concept of “blitzscaling.” It goes like this… Spend massively, get big, shut out the competition, and then worry about profitability.

Take the food-delivery industry, for example. Business has been booming during the pandemic… But a lot of companies lose more money the more customers they have.

Food delivery apps like Grubhub (GRUB), Postmates, and DoorDash all follow the same model. They charge restaurants a lot, they charge customers a lot, and they don’t pay drivers very much. No one seems to come out happy in the deal.

And still, they lose money on every delivery.

Many of these companies have big marketing costs, too. The cost of finding a new customer counts in your unit economics…

For instance, as of July, meal-kit delivery service Blue Apron (APRN) charged about $60 per order and reported gross margins of 38%. This means that after paying for food and delivery, it earned $23 per order. To get a single new customer, we’ve seen estimates that say Blue Apron pays anywhere from $94 to $460.

That means to turn a profit, it needs customers to renew for anywhere from four months to 20 months. Currently, customers tend to stick around for just a little over four months.

While Blue Apron was a startup darling, the public markets haven’t given it much credit since its initial public offering… 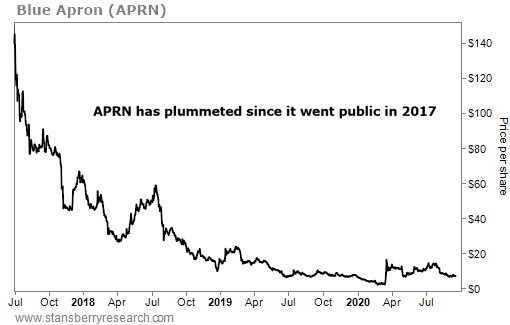 We know that everyone loves big technology opportunities – the disruptive stocks that will change how our future works. And the companies that put scooters on the streets, deliver food to our front doors, and get us talking about something new… we love them, too.

Technology will be an even bigger part of our lives from here. And a few – maybe a small few – of these companies will turn into big, profitable enterprises.

But we don’t have to play that game.

We can make money in the ever-growing technology sector by investing in companies with positive unit economics… and avoid the guessing game of which unprofitable companies will fix their fatal flaw in time.

This Stock is a Buy Now… Bigger Returns Are Coming

Your Next Star Growth Stock

3 Dividend Stocks To Buy In Your 40’s

Warning Signs: A Correction Could Be Coming in 2021

This Undervalued Stock is a Must-Own

This Stock is a Great Investment