“I’ve seen this specific situation only a few times in my career,” my buddy Jim told me over lunch a few weeks ago. “When I see it, I know it’s time to buy.”

I’ve learned to follow Jim when he gets excited…

It’s worked out well for me in the past. And it turns out, the opportunity he saw recently is far from over.

Back in 2011, Jim’s advice helped me make about four times my money on the stock of a small local bank.

The bank had traded for $23 a share in 2007. Then, the real estate bubble burst here in Florida. The local bank’s stock crashed to around $2 a share.

It was priced like it was doomed, but I believed it would survive. Still, I wanted an expert opinion.

So I took Jim out to lunch one day in 2011. He actually had a hand in starting this local bank, but he was no longer an insider. He gave me the key I needed… He said, “Steve, look at the bank’s non-interest income,” and he left it at that.

I dug deeper there. What I saw was that the bank would be completely fine. It was priced as if it was going out of business… However, thanks to its non-interest income, it would weather the real estate storm. So I started buying all I could.

That one sentence from Jim helped me make about four times my money on the stock by the time I sold in 2015.

That 2011 lunch was the first time I asked Jim for his opinion on a bank stock. (Thank you, Jim!) But it wasn’t the last.

I have known Jim for decades. Our kids grew up together. In his career, he has built a number of small banks from scratch in fast-growing markets, brought in a ton of customers, and then sold those banks to the bigger banks.

The second time I relied on Jim to help me make money in bank stocks, I bought into one of his bank startups. It was later sold to a publicly traded bank, and I made a solid profit. (I don’t remember how much exactly, but I think it was nearly a double.)

In our recent conversation, Jim told me at lunch that he started buying bank stocks in March – after the yield on Treasury bonds crashed.

He nailed it… And it’s not just bank stocks. As you know, stocks in general have soared since then – up 50% from their March bottom. Take a look… 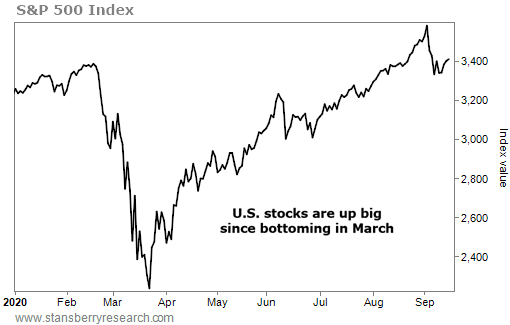 Now, most folks look at this chart and think they missed the rally. I see exactly the opposite…

Sure, I hope that you bought in March, like Jim did. But don’t worry if you didn’t.

The trend is in our favor. The Federal Reserve is pumping trillions of dollars into the system. And investors are excited.

That’s a recipe for a boom in stock prices. It’s already happening… And if you don’t get on board now, the opportunity will pass you by.

It’s not easy to take advantage of a situation like this. And it took even more guts for Jim to buy back in March. But when you look at the body of evidence, it’s clear that stocks are the best investment you can make right now. Take advantage of it.

This Stock’s Drop is a Great Buying Opportunity

3 of the Best Stocks to Trade Right Now

Take Advantage of the Melt Up Today– While You Still Can

Why You Have to Play This Earnings Season

Upgrades and Downgrades for Friday, 10/23

This Stock Has Much More Upside Ahead