After crippling Huawei and throwing cold water on ByteDance’s global business, the Trump Administration has turned its sights on a third Chinese technology giant, Tencent (TCEHY). 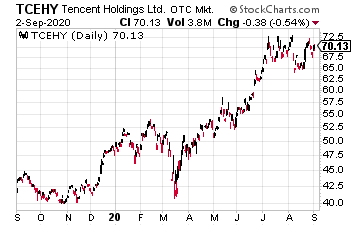 Tencent was the only Chinese company to feature in the world’s ten largest providers of both apps and games by download volumes last year, according to the mobile platform tracker App Annie.

Banning Tencent’s WeChat, an app that is central to the lives of over a billion Chinese users, would have a major impact not just on China’s second most valuable tech company, but also on a large number of large U.S. corporations.

A strict interpretation of the new rule could force Apple (AAPL) and Alphabet (GOOG) to remove WeChat (known in China as Weixin) from their app stores.

Because WeChat is so popular in China, this action would severely dent iPhone sales there.

Given the choice between WeChat and the iPhone, most Chinese consumers would ditch their iPhones for a Chinese competitor. More on that in a moment.

Of course, Apple is not the only giant U.S. company that would be adversely affected.

The possibility of losing WeChat as a sales and marketing channel capable of reaching more than a billion Chinese customers is casting a shadow over many American companies that operate in China.

Among the companies affected will be sportswear maker Nike (NKE), which operates digital stores on WeChat; membership-only warehouse chain Costco (COST), which recruits new users via the app; as well as consumer goods heavyweight Procter & Gamble (PG), which hands out e-coupons through the WeChat platform.

The app’s “mini-programs”, or instant location-based pop-ups, are used by many U.S. companies such as Starbucks (SBUX), Walmart (WMT)—whose e-commerce sales in China have doubled—and Coca-Cola (KO)to reach local consumers. Users employ the mini-programs to do things like shop, send gift cards, and order coffee. Last year they spent $115 billion through these programs! 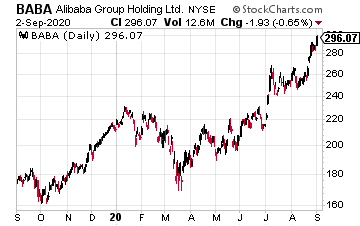 WeChat has almost replaced email in China and is one of two main ways of making mobile payments in China’s increasingly cashless cities.

Its main competitor is Alipay, a subsidiary of another Chinese tech giant, Alibaba (BABA).

The dominance of WeChat in business explains U.S. companies’ anxiety.

Even if their employees in China can keep using WeChat, the order will stop U.S.-based workers at multinational firms like General Motors or Goldman Sachs from using it to communicate with their Chinese colleagues.

And if the order prohibits U.S. companies from using WeChat’s payments systems for business transactions, it would leave them at a significant competitive disadvantage.

Tencent has also amassed stakes in a number of U.S. companies, including Activision Blizzard, Reddit, Lyft, Warner Music, Snap, and Tesla. It may be forced to sell these large stakes, hurting U.S. shareholders.

However, as I mentioned above, the company most at risk is Apple. Let me explain.

Apple is the only Western smartphone maker with a notable presence in the Chinese market, and it relies on the country for nearly 20% of its revenue.

While the specific scope of the planned WeChat ban remains to be seen, most iPhone users in China have already made up their minds as to which side they will choose, if forced.

A local media outlet, Phoenix Weekly, posted an online poll that asked: “If one day Weixin can no longer be installed in iPhones, would you change your phone or not use Weixin?” Among 88,000 participants surveyed, nearly 80,000 of them said they would choose the messaging app, while fewer than 6,000 said they would stick with their iPhones. 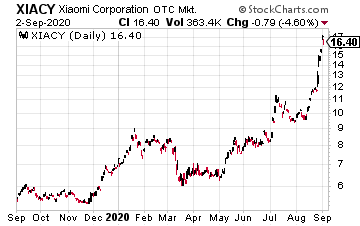 The biggest beneficiary will likely be Huawei (Apple trailed Huawei in shipments in 2019) and other smartphone makers including Xiaomi (XIACY).

The rapidly improving quality of these domestic smartphones will make this an easy choice for most Chinese.

That’s because having WeChat is an absolute must in the country. WeChat is used by 1.1 billion people—mostly in China—and its functions go far beyond chatting.

The app offers services ranging from paying bills to hailing a taxi and even swapping secondhand goods.

In other words, WeChat is at the center of everyday life in China today.

China accounts for about 20% of Apple’s revenues, so any decline there could significantly hurt the company’s bottom line. Think back to the beginning of 2019, when Apple lowered its revenue guidance—for the first time in 16 years—due in large part to weakened demand in China.

Losing access to WeChat would also dent Apple’s popularity globally, as anyone doing business with China would have to figure out another way to maintain communications with WeChat users.

Once again, smartphones from Chinese vendors such as Xiaomi will be winners as these Chinese smartphone makers will help their overseas customers figure out how to download or update WeChat.

And U.S. multinationals could see a big chunk of their revenues disappear unless cooler heads prevail.