However, with gambling, the odds are virtually always against you. On the other hand, gambling can occasionally deliver monumental returns precisely because the odds are so strongly against you. Furthermore, if you are fortunate enough to hit that one in a million bet, you could be set up for life. But most of the time when purely gambling, you end up being a net loser in the long run.

With the above said, I believe we are currently experiencing a bifurcated market. This simply means that there are both attractively valued stocks to be found and there are significantly overvalued momentum stocks.

Even a card-carrying value investor such as yours truly cannot deny the incredible performance that momentum stocks are generating currently.

This is especially true for high-profile tech stocks such as Apple (AAPL) or Microsoft (MSFT).

You can also throw Visa (V) and MasterCard into the fray.

At this point I want to be clear that there is no argument from me that these are some of the best companies on the planet.

In other words, if I were only looking at the businesses behind the stocks, I could not fault any of the above names.

In truth and fact, I had great success with past investments in all four. On the other hand, when looking at current stock values for each of these businesses, they take my breath away. As good as each of these companies are, there is simply no mathematical or practical fundamental calculation that justifies current valuations. The only salient factor or virtue for each of them is popularity, a.k.a. – momentum.

Depending on who you read, it can range from a few months out to 7 years – or even a decade. However, inevitably there is wide agreement that fundamentals (intrinsic value) rule and dominate in the long run. But to paraphrase Warren Buffett – the precise timing of when fundamentals rule or takeover cannot be determined, just that it inevitably will.

Consequently, John Maynard Keynes once allegedly quipped: “The market can remain irrational longer than you can remain solvent.” I believe the logical takeaway from that quote is that markets can behave irrationally at times, and that irrational behavior can last a long time. Nevertheless, I believe the most important takeaway from that admonition is for investors to be keenly aware of the irrational behavior when it is occurring. In other words, do not deny it or try to rationalize it away. Instead, recognize it for what it is and then be wary and watch it like a hawk.

Personally, I have experienced several bubbles over my career. For example, I got into the investing game in 1970 which was beginning of the end of the so-called “nifty 50” growth stock bubble. I also experienced full throttle the irrational exuberant period which included the technology bubble which burst in calendar year 2000, and the Great Recession of 2008 -2009 (the housing bubble).

In every case, bubbles – which I define as irrationally high valuations not supported by fundamentals – always ended badly and typically swiftly when the end finally comes. In other words, the bubble bursts. Therefore, as I previously suggested, be aware of bubbles when they are occurring, participate if you must or have the courage, but be prepared to move quickly at the first signs that the bubble may burst. But most importantly, never ever be complacent with a financial bubble.

The following excerpt from a study produced by Michael Dever of Brandywine Asset Management provides additional insights into how sentiment can dominate fundamentals for a long period of time. The complete article can be found here:

“Using a regression analysis on the returns to the S&P500 Total Return Index shows a completely different picture.

Through his research for trading strategies, Michael Dever of Brandywine Asset Management, found that 93% of the variance in the index was explained by two drivers. These were: earnings, and how much investors are willing to pay for those earnings. This in itself is not necessarily a shock. What is surprising is the time horizon wherein each of these drivers is dominant.

For periods of less than 10 years, the market sentiment driver accounts for around 75% of the price change in the market, while overall earnings growth is much less significant.”

In contrast, this next article excerpt highlights the potential dangers that momentum investing entails (emphasis added is mine):

“The idea that market sentiment or momentum may drive stock price movements has a long history. Keynes (1936, p. 156) likened the stock market to a “beauty contest” where participants devote their efforts not to judging the underlying concept of beauty, but instead to “anticipating what average opinion expects the average opinion to be.” Shiller (2005) describes a simple and intuitive feedback model of stock price movements. If prices start to rise, the success of some investors can attract public attention that fuels enthusiasm for the market. New investors enter the market and help bid up prices. Rising prices beget expectations of further increases to the point where “irrational exuberance” may cause prices to exceed levels that can be justified by fundamentals.

But if prices begin to sag, pessimism can take hold, causing some investors to exit the market. Falling prices beget expectations of further decreases, and so on, until prices finally reach a bottom. More recently, Shiller (2017) argues that investors’ optimistic or pessimistic beliefs about the stock market are similar to fads that can spread through the popular culture like an infectious disease.”

Apple, Microsoft, and Visa versus Competitors

The following earnings and price correlated FAST Graphs compare the 3 popular momentum stocks Apple, Microsoft, and Visa to more reasonably valued competitors. I have also calculated the performance that has occurred since Apple, Microsoft, and Visa deviated from fair valuation (the orange lines on the graphs) into extremely high valuation territory. Clearly, momentum can be very rewarding and can continue for long periods of time. 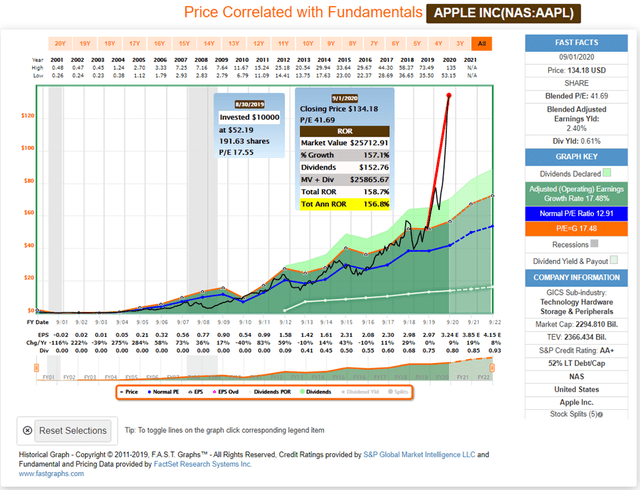 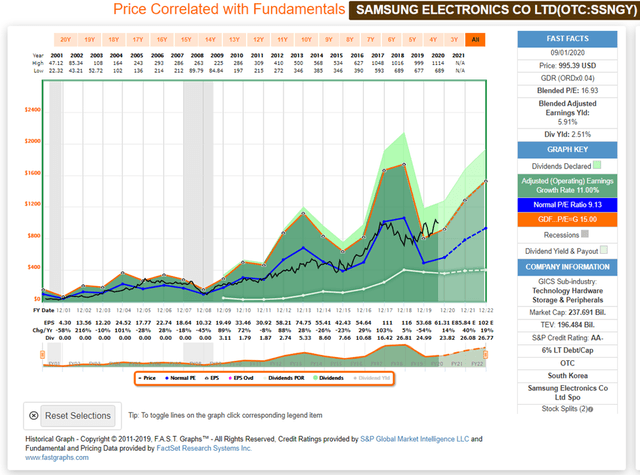 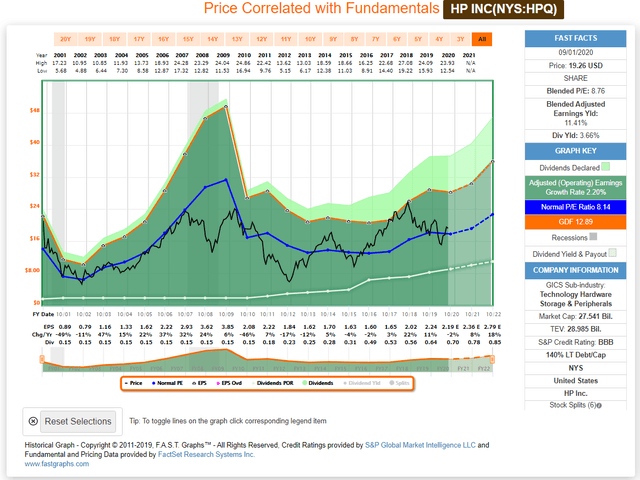 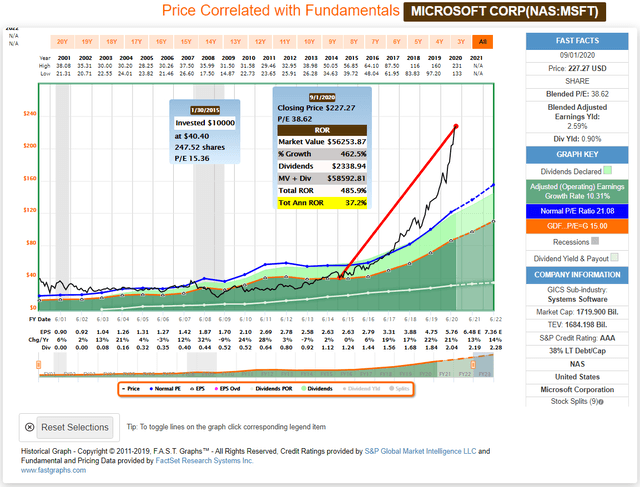 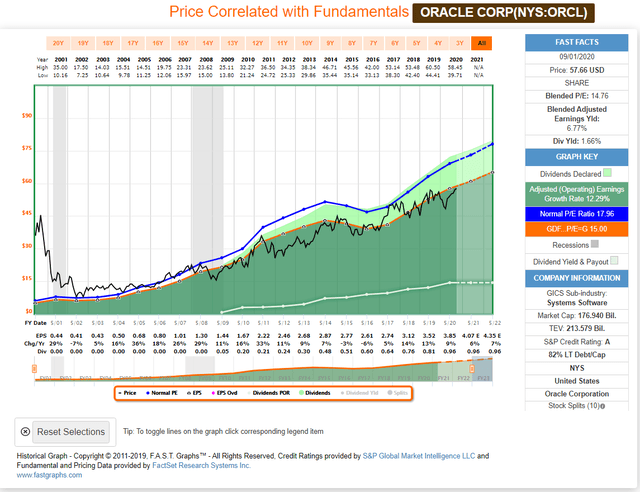 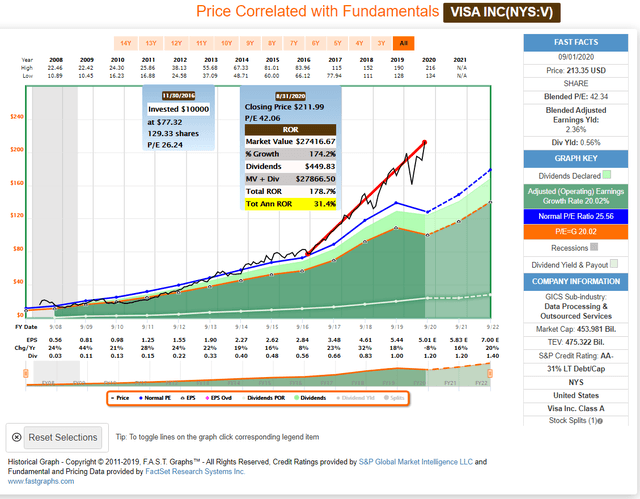 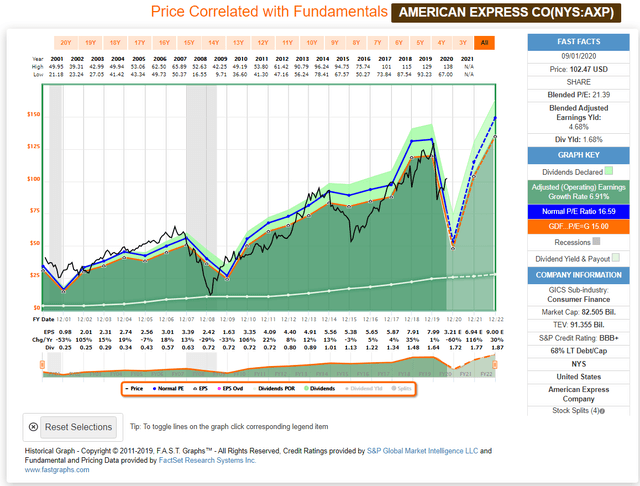 In the following video I am going to provide an analysis of the battle between better companies versus better valuations. In other words, looking forward where are the best opportunities for good returns? Most importantly, what are the risks?

In conclusion, I want it to be clear that I consider Apple, Microsoft, and Visa better companies than any of the competitors that I contrasted them against. Moreover, I fully acknowledge and appreciate the incredible rates of return that these three blue-chip technology giants have produced in recent years. In other words, I am not questioning the quality of any of these companies nor am I questioning their long-term opportunity as operating businesses. However, what I am questioning is the extremely high valuations that Mr. Market is currently valuing each of them. Common sense and 5th grade mathematics suggests that the fundamentals (precisely earnings and cash flows) do not offer yields that would make these attractive investments going forward. The companies are great, it is only the valuations that I challenge.

The moral of the story is that each of these three technology stalwarts are currently investor favorites and have been for time frames measured in years. Therefore, as I indicated in the opening paragraph, there is a logical rationale for riding the bull wave. On the other hand, be aware when, not if, but when the waves inevitably crash on the beachhead. In other words, enjoy the ride if you are in them, but do so with your eyes wide open and be prepared to protect your profits when the need arises.