Social Security benefits are an important source of retirement income, but for many current and future retirees, they are too important.

That’s because millions of Americans are currently too reliant on Social Security or will be in the future.

Monthly Social Security checks aren’t meant to be your sole source of retirement income, and if you expect them to be, they’ll provide you with far too little money.

To better understand just how big of a shortfall you’ll face, take a look at the chart below.

It’s the most important Social Security chart you’ll ever see because it emphasizes just how big of a gap there will likely be between your income from Social Security and the money you’ll need as a retiree.

The table below shows the gap between the average Social Security benefit and the mean average annual expenditures for households 65 and over, according to the Bureau of Labor Statistics (BLS). 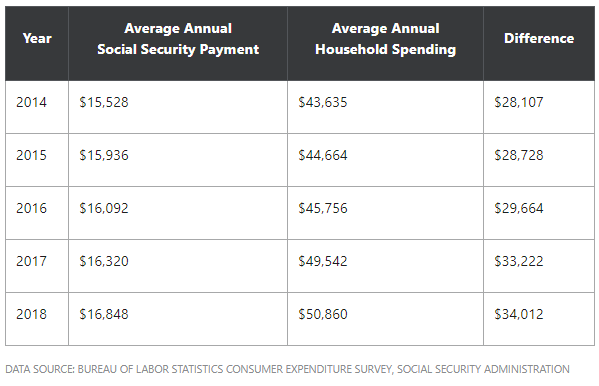 As you can see, there’s a huge gap. And while the Bureau of Labor Statistics spending data is presented on a per-household basis (with between 1.7 and 1.8 people in each household depending on the year), this doesn’t change the fact you are likely to face a significant income shortfall if you rely on Social Security alone without supplementary funds.

Take 2018, for example. Even if you took 1.8 times the average Social Security benefit (as the BLS data on spending is based on a 1.8 person household), you’d still have annual benefits of just $30,326. That means you’d need an additional $20,534 just to cover your costs if your benefits and your spending are about average.

Even if your Social Security benefits are above average, chances are your spending is (or will be) above average too. After all, you earn higher benefits if your salary is larger. But a larger salary usually means you get used to a higher standard of living, and you’ll need more money to sustain you as a retiree.

In fact, no matter what you earn, there’s almost no question there will be a shortfall between what Social Security provides and the amount of money you need as a retiree. There is actually designed to be a shortfall because your retirement benefits from this program are not supposed to be the sole source of support you depend on in your later years. In fact, the benefits are intended to replace only 40% of your pre-retirement salary and to be complemented by a pension and by retirement savings.

Sadly, however, pensions aren’t available for most Americans, which means savings may be the only source of additional money you have. So you must make sure you have enough of it.

This chart is the most important Social Security chart you’ll ever see because it illustrates so clearly just how much of a gap there is between the amount you’re likely to spend as a retiree and the benefits that Social Security will provide. If you aren’t yet retired, a glance at this chart will make clear you need to do all you can to have a large nest egg to help support you if you want to cover life’s basic necessities.

To build the nest egg you need, start saving as soon as possible in your career to take advantage of compound interest. Setting aside around 15% of your income should give you plenty of money to live on in your later years, as long as you invest wisely, take advantage of tax breaks for retirement savings, and watch the fees you pay. You may have to work up to saving this much money, but as the chart clearly shows, it’s worth it since you’ll need it.