Teladoc (NYSE:TDOC) has been volatile since announcing its merger plans with Livongo Health (NASDAQ:LVGO). This combines two excellent companies that investors can still extract value from over the long term. That’s even as the ride in Teladoc stock has been bumpy over the last few weeks.

I absolutely love this theme, as technology fuses with healthcare. While the M&A deal could create additional volatility moving forward, it can also be used to our advantage.

At face value and at the time of the announcement, the merger value was set at $18.50 billion. Since stock is being used in part of the deal, the value is subject to fluctuation, though.

Interestingly, Teladoc reported earnings just a few days before the merger announcement. While the company slightly missed on earnings expectations, revenue crushed it.

Sales of $241 million beat expectations by more than $20 million (almost 10% above estimates) while growing 85% year over year.

The growth didn’t stop with revenue, though. U.S. memberships grew 92% year over year, while total visits jumped more than 200%.

On the same day as the Teladoc-Livongo merger announcement, the latter reported earnings too.

Earnings of 11 cents per share beat expectations by 10 cents, while revenue of $91.9 million grew about 125% year-over-year and beat estimates by more than $5 million. This stock has been like a heat-seeking missile, ripping higher by almost 700% from the March lows into its earnings report and merger announcement.

Both companies had an excellent long-term growth outlook. Combining the two is only going to make it that much sweeter in the long run.

With that being said, mergers can be tough. Throw in the fact that the equity markets have roared back to life in an uncertain economic climate makes it even more difficult. Considering that Teladoc stock was up almost 300% over the past year the night before the merger announcement and LVGO was up so much into the news, it could create some headaches down the road amid a pullback.

We want to avoid a situation where one company drastically overpays for another. Given that the premium was only a small amount over the current price, Teladoc may have avoided such a fate.

Still, it’s a sizable correction in the market and this will have investors wondering if it was a good deal or not. While I like Teladoc for the long term, let’s also be open to buying on the dip. 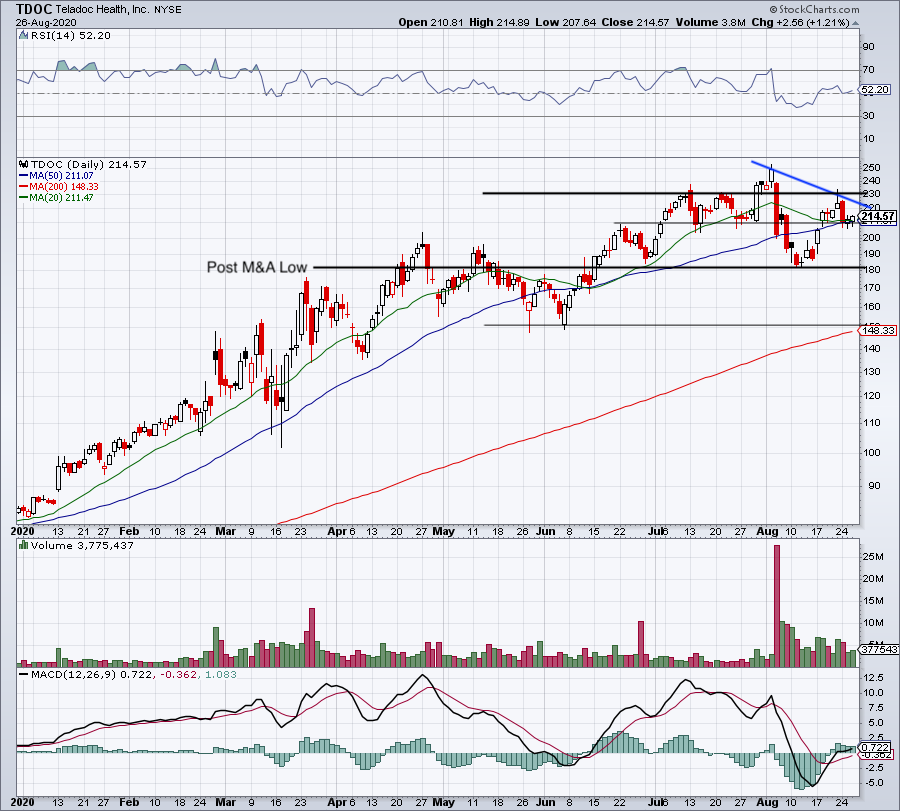 Look at how strong this name has been. The 2020 low came on the second trading day of the year. Since then, it has been one monster rally after the other. Seeing shares go from $250 to $180 — a $70, 28% correction — after the merger news was pretty intense.

But the stock has since recovered from those lows. It has been volatile the last few sessions, but TDOC stock is holding the 20-day and 50-day moving averages as support at the moment.

This is where things get interesting. If these marks continue to act as support, look to see if we can get a rotation back over $230 and above last week’s high of $233.83. Above that and the $250 high is back in play.

Below these moving averages is where investors will be looking for a buyable dip. Below $200 and bulls will want to see if TDOC stock retests the post-merger announcement low. If it does and if it holds, it may very well represent a buying opportunity.

Ultimately, a big washout down to the 200-day moving average and possibly even the double-bottom low from May and June near $150 would be a great potential buying opportunity.