Homebuilders are a long way from their bottom in 2009…

In fact, the sector is up more than 800% since then. But it wasn’t until earlier this month that it finally broke out to new all-time highs.

For the first time since 2005, homebuilders are in uncharted territory.

That’s a scary thing. The idea of buying homebuilder stocks at higher levels than we saw just before the great housing bust might sound outrageous… But don’t be fooled.

History tells us more upside is ahead for this sector, even after hitting new highs. And 24% gains are possible over the next year.

Uncertainty has a bad reputation in the investing world.

When it shows up to the party, folks get scared. They want to conserve the wealth that they have instead of risking losses in the stock market.

Many times, that means pulling money out of the market too early. Or even worse, it could mean never getting in on a rally in the first place. And investors end up missing out on big gains because of it.

History shows us that’s the exact risk folks are facing in homebuilders right now. As I said, the sector is in uncharted territory for the first time in more than a decade. Take a look… 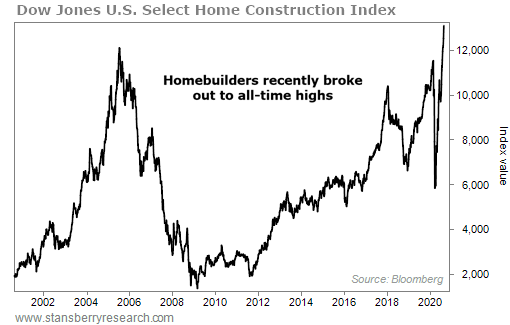 The homebuilders sector has been a stellar performer. It has absolutely soared from its COVID-19 bottom… up more than 100% since then.

Now, the question of “what’s next” for the booming sector might make you nervous. After all, homebuilders can’t keep this up, right?

Actually… they can. At least, that’s what more than 20 years of data shows.

Since 1999, buying after new highs like we’re seeing today has been a good idea. It can lead to impressive outperformance compared with a simple buy-and-hold strategy. Take a look…

Homebuilders have been fantastic performers over the past two decades, with a typical annual return of 12%. But you can do even better buying after a new high…

Similar extremes have led to 10% gains in three months, 14% gains in six months, and 24% gains over a year. Those are remarkable returns for a major U.S. sector. And they show exactly what kind of outperformance you can expect from buying after new highs.

If the new highs in the homebuilders sector have you worried that a crash is coming, rest assured… history says it’s unlikely.

What’s more, you could see 24% gains over the next year. And that means the smart move is buying this sector now.