Penn National Gaming (NASDAQ:PENN) might just have one of the coolest rebound stories in the stock market. Penn stock is up more than 1,300% from the March lows, after suffering a 90% decline in a one-month span earlier in the year.

The move has been incredible and believe it or not, may not be done yet.

A move like this would have had long odds at a sports-book, but the bettor who took the gamble would be making the news at this point.

I like Penn stock for a number of reasons.

It has exposure to sports gambling and casinos, while it’s deal with Barstool Sports should only help fuel its growth.

This stock should continue to do well as we return to a state of normalcy — however bumpy that journey may be.

First, the novel coronavirus swept into the U.S., hammering virtually every stock across the board. That did not bode well for Penn, Apple (NASDAQ:AAPL), and almost every stock in between.

Second, casino stocks were hit even harder than the stock market. Wynn Resorts (NASDAQ:WYNN), MGM Resorts (NYSE:MGM), and others were crushed as investors realized they would shut down and that sports would come to a halt.

Third and finally, Penn stock specifically was obliterated on concerns for its balance sheet. At the time, current liabilities topped current assets. Investors didn’t care about the company’s deal with Barstool, they were worried about Penn covering its short-term obligations.

All of that combined to create the massive 90% decline from its all-time highs.

However, Penn shored up its balance sheet — most recently current assets were up to $1.64 billion vs. current liabilities of $827.8 million — while investors turned their focus back to the reopening of the economy, sports, and the Barstool deal.

Now, that’s where our focus remains.

Admittedly, the airlines have told us that after a notable rebound in demand from April through June, demand has plateaued in July. That trend has persisted into the halfway point of August based on the TSA checkpoint numbers.

If we continue to reopen America and if our sports leagues can push forward without shutting down again, then Penn stock should outperform. But just as we’ve seen from the airlines, the recovery will be bumpy. That goes for both the stock price and in the businesses.

In any regard, I think Penn is a buy-on-the-dips name, as the business should do well in the long term. The Barstool deal only makes it more attractive. 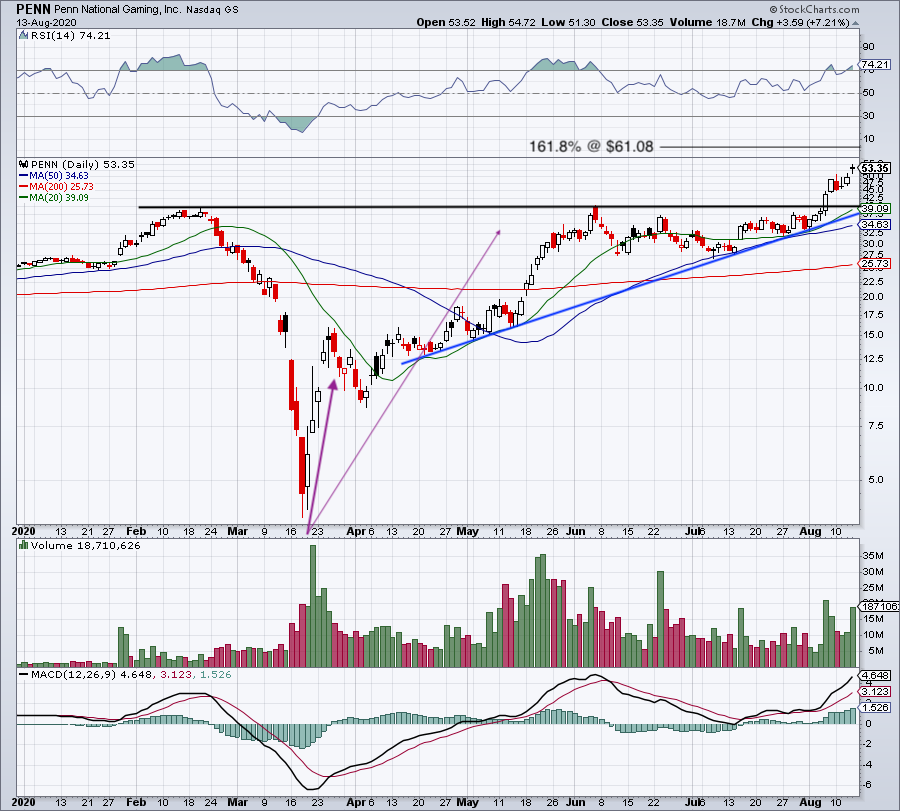 This stock has been on fire, surging from sub-$4 in March to more than $50 this week. As much as I want to buy this name on the dip, it still has runway left to keep going.

Some traders didn’t believe there was a breakout brewing in this name. They argued that Penn stock is up 700% to 900% in a span of weeks and months; there’s no way it can keep going, they reasoned.

But all we had to do was look at what the stock was telling us. When I see the chart for Penn stock, I see a series of higher lows as the stock contends with the $40 mark near prior all-time highs.

After a sharp rebound from the lows (purple arrow), this congestion is consolidation. However, when consolidating with a series of higher lows (blue line), this bodes well for an upside breakout.

With a fresh breakout clearly in play now, let’s see if shares rotate up to the 161.8% extension near $61. As for dips, I would love another shot at Penn stock near the $40 breakout level. The only caveat to that statement is if the markets are under significant selling pressure and there’s potential for a larger move lower.

Other than that, keep your eye on the dips in Penn stock.