Per the FDIC, as of August 3, that’s the US national average interest rate on savings accounts for non-jumbo deposits.

Unless you’re already a multimillionaire, you’re not generating much income on that kind of rate.

A large, safe dividend from a high-quality company has always been valuable, but it becomes even more valuable when interest rates are this low.

There’s no sense in letting cash rot in the bank if you could put that to work in a great business earning returns – and collect upwards of 100 times more income.

That’s exactly what dividend growth investing can allow for.

You could see the value of your capital rise. And you can collect a much higher yield in the process.

I’ve eschewed these low rates in favor of dividend growth investing for years.

I built the FIRE Fund by doing so.

This six-figure portfolio of high-quality dividend growth stocks generates enough five-figure passive dividend income for me to live off of.

In fact, I was able to retire in my early 30s by using dividend growth investing to my advantage, as I describe in the Early Retirement Blueprint.

Many of the world’s best businesses are becoming more valuable and profitable as they sell more products and/or services, to more people, at higher prices year in and year out.

And they’re able to pay out reliable and rising cash dividends to shareholders because of this.

See what I mean by perusing the Dividend Champions, Contenders, and Challengers list.

However, whereas a savings account can be opened very easily, investing in businesses does require some homework.

Fundamental analysis and valuation are both very important.

That latter part in particular can play a major role in the success of your investments.

All else equal, a lower price will result in a higher yield. 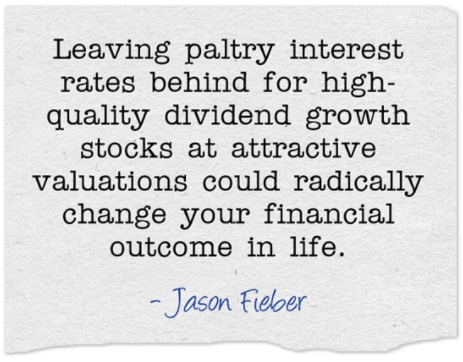 Fortunately, the exercise of valuing stocks isn’t as difficult as it might seem.

Fellow contributor Dave Van Knapp has greatly simplified that exercise via Lesson 11: Valuation, which is one of many insightful lessons he has produced on dividend growth investing.

AT&T Inc. (T) is a multinational media conglomerate that provides communications and digital entertainment services in the US and internationally.

AT&T is vertically integrated on the content side, acting as both a major producer and distributor of content.

Simultaneously, they’re also one of the largest wireless telecom companies in the world.

There are, after all, two major themes playing out – especially in a post-pandemic world.

First, there’s the acceleration of the work-from-home model.

This has created more demand for mobile data and telecommunications, which is really AT&T’s bread and butter. Mobile data is practically a utility now. I think most people view it as just as important as electricity nowadays.

And then there’s digital content, which is as popular as it’s ever been.

That should serve the dividend well, too.

I mentioned earlier on about the possibility of collecting upwards of 100 times more income than the lowly 0.06% national average rate on US savings accounts.

The spread here is noteworthy.

A yield near 7% is always attractive, but it’s especially attractive in a world in which rates are so anemic.

Plus, there’s the growth, which you won’t get at your bank.

AT&T has increased its dividend for 36 consecutive years.

The 10-year dividend growth rate of 2.2% won’t knock your socks off, but it’s coming on top of that massive starting yield.

The payout ratio against TTM adjusted EPS is 59.4%, showing a healthy dividend.

But I think this is a case where it’s better to look at free cash flow, due to frequent adjustments to earnings.

The company’s free cash flow for the most recent quarter came in at $7.6 billion.

This covers the dividend twice over, putting the FCF payout ratio at 49%.

Now, we ultimately invest in where a company is going, not where it’s been.

It’s the future growth that today’s investors are investing in, and that future growth is what helps us to estimate intrinsic value.

I’ll now build out a forward-looking growth forecast for the company.

This will partially rely on the last decade’s worth of top-line and bottom-line growth.

Then I’ll compare that to a near-term professional prognostication for profit growth.

Blending the proven past with a future forecast in this manner should help us to come to a reasonable conclusion about where the business is going and what it might be worth.

Pretty impressive for a staid business; however, much of this growth was due to acquisitions, particularly the recent $85 billion purchase of Time Warner.

These acquisitions have come at a cost, with AT&T adding debt to the balance sheet and issuing additional shares on the equity side.

Admittedly, it’s somewhat difficult to get a true read on AT&T’s EPS growth.

GAAP results are volatile due to frequent charges or benefits that can skew the numbers one way or the other.

But I think it’s safe to say that the overall business is growing roughly in line with the dividend.

That is to say, AT&T is a low-growth business that’s expanding at a low-single-digit rate per year.

It’s basically a cash flow machine, generating a ton of free cash flow and returning a significant portion of that to shareholders in the form of a massive dividend.

Looking forward, CFRA currently does not have a three-year EPS forecast for AT&T.

On the flip side, the jury is still out on their launch of HBO Max, which is their new streaming business.

Over-the-top content is the future, and AT&T is acting on that with this new DTC offering. But the high monthly price in a competitive market may make it less appealing than other options.

In addition, the cord-cutting phenomenon and high debt load weighs on the company.

And then there’s the recent effects of COVID-19, which has shut down feature films and created additional short-term costs.

When it’s all said and done, I wouldn’t expect much growth out of AT&T.

It’s not a high-flying tech company.

But when you’re getting a ~7% dividend, you really don’t need much growth at all in order to rationalize the investment.

My expectations are for the dividend to continue growing at a low-single-digit rate, just as it has been for many years now.

Moving over to the balance sheet, this is probably the biggest issue with the business.

The long-term debt/equity ratio is 0.81, while the interest coverage ratio is just over 3.

They’ve paid up for growth.

This has ballooned the debt load to ~$150 billion, which needs to be worked off.

Profitability is also challenging to fully read, due to the aforementioned volatility in GAAP results.

But it does look robust when the company is firing on all cylinders and results can be normalized.

Over the last five years, the firm has averaged annual net margin of 10.87% and annual return on equity of 7.95%.

There’s a lot to like about AT&T as an income play.

With scale, vertical integration, and key mobile technology, the company does have competitive advantages.

Regulation, litigation, and competition are omnipresent risks in every industry.

AT&T is a set of mature businesses with high fixed costs, which will limit growth.

They’ve stretched the balance sheet. Paying down debt will take away from cash flow and future M&A opportunities.

Their new streaming effort is unproven.

And any kind of major technological change in the way people communicate on devices would have implications for the company.

Overall, I view this as a low-risk, low-growth stock with a high yield.

And with the 22% YTD drop, the valuation is about as compelling as it’s ever been…

This is obscenely low, even for a company without very much growth.

While the S&P 500 has mostly recovered from its March low, AT&T’s stock is still languishing down here in deep value territory.

The P/CF ratio, at 5.0, compares favorably to the stock’s three-year average P/CF ratio of 5.5.

And the yield, as noted earlier, is materially higher than its own recent historical average.

So the stock looks cheap when looking at basic valuation metrics. But how cheap might it be? What would a rational estimate of intrinsic value look like?

I factored in an 8% discount rate (to account for the high yield) and a long-term dividend growth rate of 2%.

That DGR is right in line with what AT&T has been doing for many years.

I’m expecting neither an acceleration nor a deceleration in the overall business from here.

They have more growth opportunities (streaming and WarnerMedia), but they also have a lot more debt.

I think the most likely outcome is that AT&T continues to plod along as they have been, which should be just fine for income investors.

AT&T doesn’t need to do anything extraordinary in order to meet this expectation.

I think AT&T is at least moderately undervalued, if not significantly so.

We have a pretty solid consensus here. Averaging the three numbers out gives us a final valuation of $35.79, which would indicate the stock is possibly 19% undervalued.

Bottom line: AT&T Inc. (T) is a telecom, mobile data, and digital content giant that’s positioned extremely well in a work-from-home environment. With a 7% dividend, almost four decades of dividend raises, a moderate payout ratio, and the potential that shares are 19% undervalued, this could be one of the best opportunities in the high-yield space.