My friend, many investments are cheaper than you can imagine right now…

There’s so much investing opportunity today, I hardly know where to begin!

“Steve, have you lost your mind?” you might be thinking. “You know that we’re in a pandemic… that stock prices are at new all-time highs… and that house prices are now above their 2006 peak… right? So how can you possibly say that these investments are cheap?!”

How can houses be cheap when they are selling at all-time highs?

I realize it sounds like a ridiculous thing to say. And how can stocks be cheap when they’re almost back to their highs, too?

I’ll cover it all today. And hopefully you’ll walk away feeling like I do… darn excited.

I’ve told this story in DailyWealth before.

But I keep telling it because, honestly, I know a lot of folks have a hard time believing me.

If that’s you, then please hear me out today. Because this is darn important for us going forward.

If you buy into what I’m talking about, then you will have a huge advantage over your peers in your investments…

You will have conviction that you are doing the right thing… And best of all, chances are great that you will make a heck of a lot more money than just about anyone you know.

There’s a crucial detail that tells us that investments are darn cheap today: interest rates.

Let’s stick with the housing idea for today…

The truth is that most people don’t buy a house based on its sticker price… They buy it based on its monthly payment.

So I built a revealing chart. And it’s one you likely haven’t seen before. It’s based on the simple idea that mortgage payments are critical in determining the “fair value” of the median house in America.

Three things are included in my fair-value calculation (all adjusted for inflation):

The result is fascinating…

In the 1980s, when mortgage rates were sky-high, houses were expensive based on my chart.

After that, interest rates went down, and by the 1990s, housing was fairly priced. Then the housing boom took hold, and by 2006, house prices were overvalued.

But the most fascinating part of all of this is what’s happening today. Take a look… 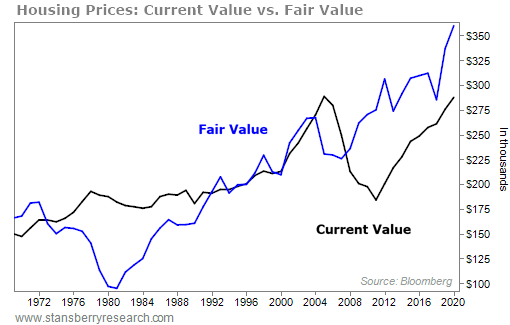 You can see from the black line that house prices bottomed in 2011. That makes sense. Home prices had been crashing for years at that time. And since then, they’ve soared again.

That boom in house prices is what has people worried about real estate now. House prices have gone up so much, people think they can’t go up much further.

But look at my “fair value” line today, in blue above…

Thanks to record-low mortgage rates, the fair value of houses in America today has actually gone up faster than house prices have gone up. The typical home in America is underpriced by about $75,000!

You’ve heard me say for years that the largest part of my financial portfolio is in Florida real estate. Now you see why. I’m putting my money where my mouth is on this trade.

As I said recently, the Fed is going to do all it can to stimulate the economy, with the tools it has always relied on – and that means we are in for lower rates for a long period of time.

That’s it, my friend. That’s the thing that matters most in the market today.

We have record-low interest rates. And that makes housing a better deal than you can imagine. So if you’re in the market to buy a home, don’t put it off… You want to act now.

This Investing Mistake is Much More Common Than You Think

Upgrades and Downgrades for Thursday, 1/21

This Stock Has Huge Profit Opportunity