Do more of what’s working… And do less of what’s not.

That simple investment truism is all it takes to stop yourself from ruining your portfolio. But it’s easier to say than it is to follow.

That’s because doing more of what’s working means buying companies after they’ve rallied. It means buying assets that have already gone up a lot. And that feels wrong.

History tells a different story, though. It tells us that following the trend is the smartest bet you can make when investing.

And that often means buying a hot sector after it has hit new highs.

That’s the opportunity we have today. A hot sector is hitting new highs. And history says it should lead to double-digit gains.

Almost everything sold off big earlier this year. But after that, the biotech sector was the first to hit new highs again. And it did so in April.

No other U.S. sector came close to that kind of breakout until June… two months later. And today, we are seeing signs that this uptrend is accelerating.

You see, biotech stocks continue to shatter old “new high” records almost daily. It has been a darn impressive rally. Biotech stocks, as measured by the Nasdaq Biotechnology Index (“NBI”), are up more than 45% since bottoming in March.

Recently, the sector’s hot streak got even hotter. Biotech stocks rallied for eight consecutive days in June. That tells us that the trend is accelerating – and that more gains are likely in the coming months.

The chart below shows the recent breakout… 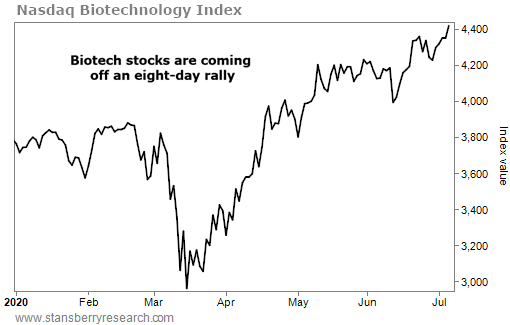 You can see that the trend has been picking up steam in recent weeks. The recent string of up days also points to more upside ahead…

Since 1993, similar events have led to big outperformance versus the typical return of this index. Take a look at the table below…

Biotech stocks have been a stellar investment for the past 27 years… returning 12% a year during that time. But you could’ve done much better if you only bought after events like we saw recently.

Buying after these kinds of up-day moves can lead to 10% gains in three months and 27% gains over the next year. That’s much higher than the typical buy-and-hold return.

It might seem crazy to invest in a hot sector after a run like we’ve just seen. But we know we should do more of what’s working. And biotech stocks are working now.

The simplest way to own them is with the iShares Nasdaq Biotech Fund (IBB). The fund has been soaring. And history says double-digit upside is possible from here… Don’t miss it.