You should always be a little scared of consensus…

When everyone’s on the same side of a trade, it typically goes against them.

The reason for this is simple: If everyone’s bullish on an idea at the same time, who’s left to buy and push it higher?

The only momentum that’s coming is likely to be lower. And the opposite is true, too…

Investors today are betting that the market will fall. They’re piling into the same shorts.

And as the downside bet increases, a market rally becomes that much more likely.

If so, it’ll mean big gains for contrarian investors – and big losses for those caught on the short end of the trade.

If you “sell high and buy low,” you make money on the trade. You’re betting the price will fall.

It’s the reverse of a typical “long” investment – where you buy expecting that the stock will go higher. But there’s another key difference many investors don’t think about…

Right now, investors are overwhelmingly bearish on stocks. To see it, let’s look at the most recent Commitment of Traders report…

This is a weekly report produced by the Commodities Futures Trading Commission. It shows us what futures traders are doing with their money.

According to the data, the net short position for the S&P 500 is the largest it has been since 2011. Take a look at the chart below… 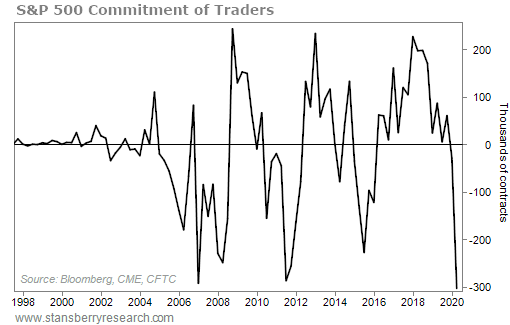 Now let’s look at the Dow Jones Industrial Average. Here, the net short position is the largest on record… 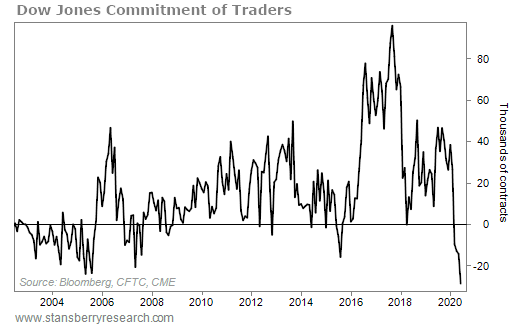 You get the idea. And it’s a similar story with the Nasdaq, too. The net short position increased last week to 1,800 contracts – the largest amount of short interest since 2011.

All this means one thing…

If the stock market keeps going up, all these short traders will need to get out. They’ll need to cover their positions and buy them back.

Typically, that doesn’t happen until it’s too late. At that point, it will be like trying to put out a fire with lighter fluid. Prices could absolutely soar as traders scramble to buy and close their positions.

Importantly, this isn’t the only sign that the market’s pessimism has gone overboard…

We can also see it in the recent survey from the American Association for Individual Investors (“AAII”). This poll asks investors where they think the stock market is headed over the next six months. It’s simple – they’re either bullish, bearish, or neutral.

According to the most recent report, 48.9% of respondents were bearish. That’s well above the historical average of 30.5%.

On the other side, bullish sentiment came in at just 24.1%, well below its historical average. This shows individual investors are still scared of the market. They’re not prepared for a move higher.

Bearish investors stand to lose a lot of money when this situation reverses. But you don’t have to be one of them…

Today, investors have too much money riding on a move lower. We’re likely to see the opposite. And that tells me it’s time to be greedy.