Luckin Coffee (LK) had everything going for it. If there ever was the right company in the right place at the right time, this was it.

Billed as the Starbucks of China, the coffee chain had grown at a blistering pace. It went from its founding to an IPO in less than two years. In just eight months, Luckin doubled its valuation to $12 billion.

There was only one small problem: it was all fake.

Two months ago, the company admitted that it had fabricated its sales. Overnight, the shares plunged by 75%. Luckin’s luck had run out.

Now the lawyers have gotten involved. There are investigations. All the big-shot execs have been canned. The shares will probably get delisted. In January, LK got as high as $51 per share. A few days ago, it was going for $1.33. Ouch!

You may be asking yourself: well, what happened? How could they get away with it for so long?

What Counts as a “Sale”?

Lots of financial scams boil down to a question that’s harder to answer than it appears: what counts as a sale?

Let’s say you have a reliable client and every quarter she purchases $100,000 worth of your product.

Can you mark that down as a sale for next quarter? That’s easy: you can’t.

Now, what if in that same scenario, you’ve already shipped the merchandise, but haven’t received payment yet? Suddenly it’s not so easy.

What if you set up a shell company that lets you “buy” inventory from yourself? Now we have some legal problems. I would estimate that 50% of financial scams operate off this premise, and it seems to be what happened at Luckin.

According to the Wall Street Journal: “Luckin sold vouchers redeemable for tens of millions of cups of coffee to companies that had ties to Luckin’s chairman and controlling shareholder.” That’s a big no-no.

The Luckin story is especially painful because it had roped in so many unsuspecting people. The story sounded great. Almost too good.

How To Avoid Being Scammed

Alas, liars and scammers will always be with us. The easiest way to lessen any harm that could come your way from a fraudulent company is to make sure your portfolio is diversified. That will lessen the blow from one bad-egg stock. There are, however, ways to help you avoid these companies altogether.

First, I like to find companies whose management I trust. An easy “tell” is how transparent the company is. Following a company’s financials isn’t rocket science; if it’s well run, it should have clear financial statements.

I also like to look for is a company’s tax bill. This isn’t a foolproof way of figuring out whether a company is on the up-and-up, but it’s certainly a clue. An honest and profitable company will likely have a sizeable tax bill. There are, of course, perfectly legal ways to reduce your taxes, and a good company should use them. But it’s rare to find a fraudulent company has paid a lot of taxes.

Another clue that a company is legit is that it pays a dividend. Again, this isn’t a perfect indicator, but a company that writes you a check is far less likely to be scam. Nobody likes to part ways with money—especially crooks! 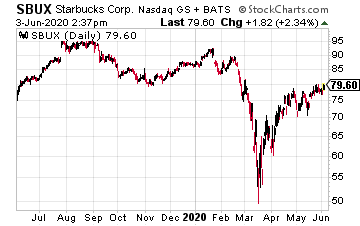 Let me also say some good words about the real Starbucks (SBUX). The company has increased its dividends for ten straight years. For the last fiscal year, Starbucks had income before taxes of $4.47 billion. Of that, the coffeeshop paid Uncle Sam $872 million.

Starbucks reported an earnings decline for its last fiscal year, ending September 2019. And the shares got dinged hard during the nasty bear market earlier this year. With so many stores closed, the next earnings report will look terrible.

Still, this is Starbucks. They’ve managed their way through adversity before. If the economic reopening goes smoothly, then I think Starbucks can hit $100 per share within two years.

Have You Downloaded Your Copy of the "Beginner's Options Guide"? [sponsor]
If not, here's your chance to save it to your computer while it's still free. That way you will never have to pay for it again in the future. This guide will get you placing winning trades without you needing to spend hundreds of hours studying. In fact, you can place your first trade on Monday morning after reading my "Beginner's Guide" to trading options. Click here for your copy.

This Stock is a Must-Buy on the Latest Dip

You’ve Got to Own Stocks Now

Upgrades and Downgrades for Friday, 9/18

The 3 Best REITs to Buy as Renters Flee Cities