It has been a violent ride…

First, we experienced the fastest bear market ever in U.S. stocks. And now, the rally has been just as aggressive.

This kind of whiplash has a lot of folks confused. Even for the investing pros, it’s tough to get a read on what’s next for stocks.

Could the next sharp fall be right around the corner? Or will this market keep heading higher?

Fortunately, recent market action gives us a little insight on how to answer those questions.

You see, stocks rallied more than 10% in April alone. A one-month move like that hasn’t happened since 2011. And it has only happened a handful of times going back to 1950.

It turns out, these rare moves have been extremely bullish over the last 70 years.

We could see the S&P 500 Index rally double digits over the next year.

Rumors of an intensifying trade war and the constant onslaught of coronavirus news could have stopped the rally. But they’ve failed. History now shows us that today’s upward move still has room to run.

The S&P 500 jumped 13% in April. You can see the fantastic rally in the chart below… 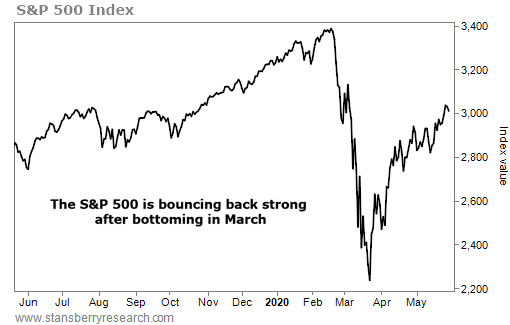 Stocks rose again in May, jumping more than 3%. But as the chart shows, the stronger move from stocks was in April. And history tells us how rare it was, too.

A move of 10% or more in a month has happened just 12 times since 1950. And that includes this recent instance. This kind of momentum often leads to more upside as well…

Nine of the previous 11 extremes led to further gains in the S&P 500 over the next year. And it can mean significant outperformance. Check it out…

The broad market has returned nearly 8% a year since 1950. That’s impressive. But buying after moves like this can lead to much better results…

Similar instances have led to 4% gains in three months, 11% gains in six months, and an impressive 12% gain over the next year.

Simply put, buying after a move like we saw in April can turn a boring 7.6% gain into a solid double-digit win over the next year.

The market seems tough to gauge right now. First the major crash… then the major rally. But history points to more gains from here.

The S&P 500’s jarring rally is likely to continue. Make sure you’re on board.