When the market was first rocked by the coronavirus, the healthcare sector held up fairly well. Of course, I mean that in a relative sense; healthcare stocks still fell, like the rest of the market. But as a whole, the sector fell less.

Talking about positive relative strength in a terrible market often sounds bizarre—“Sure, we’re down, but not nearly as much as everyone else!”

Still, this positive relative strength is an important trait to have. Healthcare tends to be a defensive sector.

Usually, folks don’t cut back on their healthcare spending during a recession.

While many healthcare stocks are deserving of this relative strength, not all of them are.

This is especially true as we head into an election year.

The election is still five months away, but the candidates have very different ideas about how our healthcare system should work. Naturally, that has an important impact on which stocks will do well, and which stocks could be left behind.

Check out the performance of the S&P 500 Healthcare Index (red) versus the S&P 500 (in blue) over the last three months:

Investing in healthcare is a tricky business, I need to explain a few important points. There are few better businesses to have in your portfolio than a thriving healthcare company. For one, you can get enormous indirect support from the government. Plus, healthcare firms have a more-or-less legal license to jack up prices each year—just ask anyone who’s been to the pharmacy lately.

Another key aspect of healthcare is the stability of the business. Spending on healthcare isn’t greatly impacted by the heath of the economy—at least, not in the way, say, the housing sector is. The stock market loves stability and it will reward companies that can deliver predictable profits each year.

Of course, not every component of the healthcare sector is stable. One dangerous area in healthcare is biotech investing. While there are some worthy biotech firms out there, many are not. In fact, I don’t think most listed biotech stocks should be publicly traded. The companies raise tons of money from gullible investors before they even have products on the market. From what I can see, they only thing they make is loads of press releases promising investors they’re on the cusp of some great medical breakthrough. Yeah, right.

Many of these biotechs are little more than lottery tickets. Sure, you might get the one that pays off. But the odds are, you won’t.

I want to highlight three healthcare stocks that I currently have rated as strong sells. Always bear in mind that there’s a difference between a good company and a good stock. If you own any of these three, you may want to consider selling soon. If you had been thinking of buying any of them, you may want to reconsider. 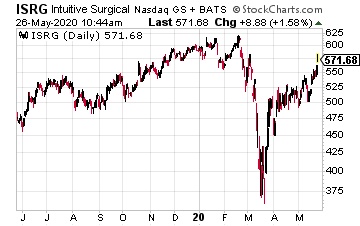 Let’s start with Intuitive Surgical (ISRG). I want to be clear that I’m a fan of this company. In fact, a big fan.

Intuitive is helping to revolutionize surgery.

Its da Vinci Surgical System transforms the surgeon’s natural hand movements outside the body into corresponding micro-movements inside the patient’s body.

Intuitive’s shares got flattened for a 40% loss earlier this year when the market tumbled. But the last earnings report was quite good. Intuitive creamed estimates yet again ($2.69 versus Wall Street’s estimate of $2.54 per share).

The shares have rebounded and now trade at more than 43 times next year’s earnings. Sorry, but that’s just too much. I love the technology but not the price. Sell ISRG. 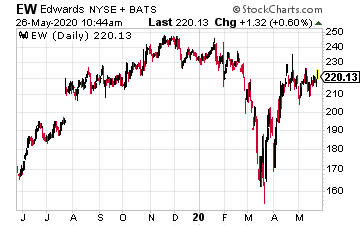 Next up is Edwards Life Sciences (EW).

The company is probably best known for its heart valves.

That’s a very good business to be in and shares of EW have rallied nicely.

Last month, Edwards crushed earnings again. For Q1, the company made $1.51 per share, beating Wall Street’s consensus by 18 cents. Traders loved that news, which sent the shares into low-Earth orbit. Wall Street now expects 2020 earnings of $4.97 per share. That’s enough to give Edwards a forward price/earnings ratio of 44. That’s simply not sustainable. EW is not worth chasing.

My numbers say that Edwards deserves a nice premium to the market, but the current share price is way above that. For now, Edwards Life Sciences is a sell. 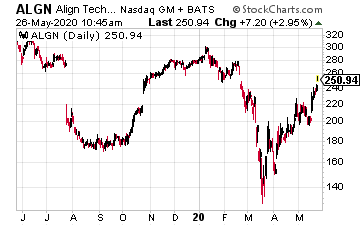 There’s a big market for Align and business has been quite good, but I’ll caution you that this stock can be a rollercoaster.

The last earnings report was a big miss, and I’m concerned that Align doesn’t seem to have the pricing power of its main rivals. 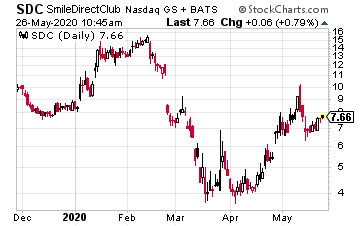 For example, SmileDirectClub (SDC) is shelling out tons of money on advertising. They’re willing to lose money for now, which may start to squeeze Align.

Based on the latest numbers, Align Technology is going for 35 times next year’s earnings.

That’s way too much.

However, if you’re patient, you may get a chance to buy Align for a much lower price sometime later this year. The next earnings report is due out on July 22. For now, Align Technology is a sell.