In its latest earnings report, Nike (NKE) reported a 36% increase in digital sales. In a press release accompanying the earnings release, President and CEO John Donahoe said, “We know it’s in times like these that strong brands get even stronger.”

I tend to agree with Mr. Donahoe.

I’ve written about several new names that have benefited tremendously from the move to mobile work and social distancing, like video conferencing tool Zoom (ZM).

But, we’ve also seen a number of “old school” stocks hold up well despite the current headwinds.

These stocks are surviving—and even thriving—despite adversity, because they have built products that customers continue to need or want in good times and bad.

They have name recognition, engage with their customers, and often possess a war chest that allows them to outlast or outspend competitors.

These brands are ubiquitous and always seem to come out on top when the smoke clears. I remember watching McDonald’s (MCD) trade lower in both the dotcom bust and in the financial crisis of 2007-’08. Looking at a monthly chart today, you can barely see the lowering that happened during those crises.

As I mentioned above, Nike is one of the companies that continues to execute strongly in the face of adversity. Nike’s earnings increased to $10.1 billion in its latest quarter, up 5% year-over-year. The quarter concluded with the onset of the COVID-19 pandemic, and brick-and-mortar sales in China were negatively affected as stores closed. 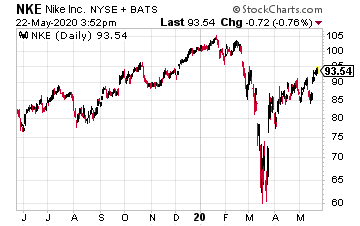 ESPN’s recent series, The Last Dance, shattered previous records for a documentary on ESPN and enhanced Nike’s mystique even further.

Nike was portrayed in a very positive light, shown as willing to take a major financial risk on a then-untested, up-and-coming NBA player, Michael Jordan.

After the series aired, a pair of Nikes worn and signed by Jordan sold at auction for a record $560,000. Talk about some free advertising!

In its earnings report, Nike said its margins were negatively impacted by COVID-19, mainly because its highest margins are in China, where shutdowns had already occurred. Margins for the quarter dropped 80 basis points, to 44.3%.

The company’s stock currently trades around $94, which is off from $104, where it traded prior to the onset of the coronavirus pandemic. With its online presence growing nicely—a key ingredient for a successful retailer today—the company should continue to perform well throughout the current health crisis. 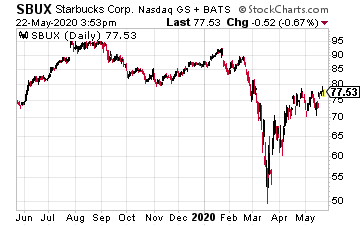 Another company that on the surface you might think could be severely damaged by the new normal, is Starbucks (SBUX).

But the coffee chain based out of Seattle, which built its brand as a place for people to gather for a cup of coffee and socialize or work in its omnipresent shops, is quickly figuring out new procedures and serving its customers.

The Starbucks stores near me have constant lines at the drive through, and if you didn’t know there was a health crisis going on, you certainly wouldn’t be able to glean any trouble from the business that is already returning to the iconic brand.

In its latest earnings report in late April, Starbucks reported revenue of $6.0 billion, down 5% year-over-year due to the impact of the pandemic. Interestingly, the company opened 225 net new stores during the quarter. Earnings per share came in at $0.26, which was a 47% decrease year-over-year, but again, was from the sudden onset of the virus.

As Starbucks is quickly reopening shuttered stores, and putting in place procedures to safely serve customers, I think we’ll see a relatively quick bounceback in these numbers. 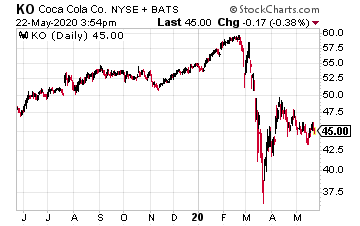 Finally, we can’t talk about iconic brands that stand the test of time, without including Coca-Cola (KO).

One of the major strengths of the brand is its distribution channel.

While its customers have been unable to purchase Coke-branded drinks at restaurants, they have turned to grocery stores.

In its latest quarter, Coca-Cola reported revenue of $8.6 billion—a mere 1% decline year-over-year, even in the face of one of the largest global health crises ever. Operating margins moved from 28% in the year ago quarter, to 27.7%.

Coca Cola stock now trades at just under $46, substantially lower from where it was at $60 prior to shutdowns related to COVID-19. I would not be surprised at all to see this stock move higher from here. The company has a stalwart brand that will see it through the crisis, and as Nike CEO Donahoe said, “…in times like these, strong brands get even stronger.”