The Great One took home the victory. And then, the Great Eight evened the score. An epic battle took place a few weeks ago between the greatest hockey player ever, and the upstartchasing his record.

Fresh off of winning the Stanley Cup with the Washington Capitals, Alex Ovechkin took on Wayne Gretzky in a one-on-one matchup of two of hockey’s greatest players.

Only problem? Gretzky is 59, and retired many years ago, while Ovechkin is in his prime, looking to capture at least one (maybe two, or three?) more Stanley Cups. So, how did they split a two-game series?

Gretzky was able to overcome his age disadvantage (or some might argue wisdom advantage)…because the game took place virtually, in EA Sports NHL 20. 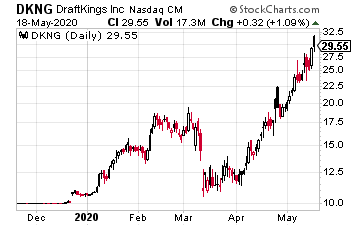 NBA players are playing basketball, NASCAR drivers are racing, and tennis pros are playing tennis. There is even betting available via online gambling sites like DraftKings (DKNG).

Sports will be back. But, in the meantime, the online gaming frenzy that had already been ignited by the likes of Fortnite, League of Legends, and other popular competitive online games, has seen a surge in activity. 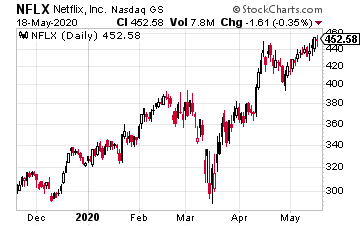 Not only are more people at home playing games, but we’re all looking for entertainment.

There are only so many Netflix (NFLX) shows you can watch in a single night.

So why not watch sports stars, who we are obsessed with already (I know you’ve been watching ESPN’s The Last Dance), play video games and perform their sorely missed celebrations, via Twitch?

And, as more people play, and watch, and bet, on video games, there are companies out there profiting from our newfound habits. These are three of the companies reaping the benefit of the new normal. 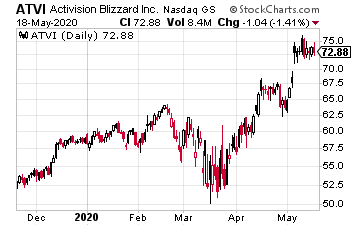 Activision Blizzard (ATVI) recently reported earnings, and promptly jumped 6% higher. The stock is up over 20% in 2020.

In the last few weeks I’ve written extensively about companies that are doing well in the current environment.

ATVI could be a poster child for that group of companies.

Not only is the company benefiting from a more captive audience, but has also launched a very successful new edition of Call of Duty, one of its franchise properties.

The new Call of Duty: Warzone introduced a credible competitor to Fortnite, one of the most successful online games ever. And, as CEO Bobby Kotick noted on the ATVI earnings call, the new game brought in “over 60 million players since its launch.”

Kotick said the company “significantly exceeded our outlook for both revenue and earnings per share” in the quarter. Activision Blizzard revenue in the first quarter was $1.79 billion, which was $148 million above guidance the company had just issued in February. The company delivered $0.65 in earnings per share and also upped its dividend to $0.41 annually, an 11% increase year-over-year. 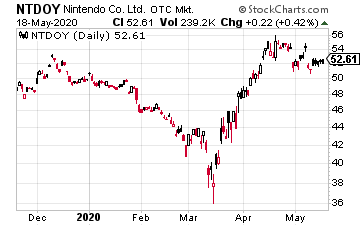 Another beneficiary of the limits on other entertainment options has been Nintendo (NTDOY).

If the last time you picked up a game controller was to play Mario Bros. on a Nintendo 64, you’re missing out.

The company has designed a sleek new mobile gaming device, the Switch, that is the gaming platform for a new generation of young gamers.

Gaming companies today have ubiquitous marketing as they tie their games in with famous entertainers, movies, and social media. Fortnite has excelled at this with a number of themes tied to everything from Disney (DIS) characters to rappers. Nintendo is promoting its Pokémon brand with Detctive Pikachu, a recently released movie starring Ryan Reynolds.

DIS recently reported a blowout quarter, with $3.3 billion in operating profit for its fiscal year ending in March, a 41% year-over-year increase. While Nintendo reported some supply chain issues due to the coronavirus, it appears to be back on track assuming no worsening of the crisis in China, where many of its Switch components are produced.

Nintendo did lower guidance for 2020 slightly, but the company has a history of under-promising and over-delivering. 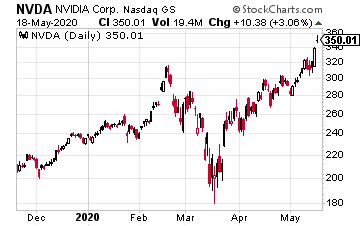 Finally, we shouldn’t forget the companies that make the guts of the gaming platforms that are running all these games we’re playing.

Nvidia (NVDA) is one of the leading chip makers for the gaming industry, and it has a sterling reputation.

NVDA investors have been richly rewarded in 2020 thus far.

The stock is already up 32% this year on the strength of the company’s graphic processing units (GPUs) and chipsets.

Games today are cinematic in nature, and have graphics that require powerful processors to show detail in what has essentially become a modern version of art.

NVDA has a secondary wind in its sails as well. Nvidia GPUs are a main component in “mining” computers used by cryptocurrency miners. This business had fallen off in recent years as cryptocurrencies, like Bitcoin, fell from record highs, but as monetary stimulus leads to potential dollar devaluation and inflation, cryptocurrency is making a comeback.

In its most recent quarter, Nvidia reported earnings of $1.53 per share, up 66% year over year. The company noted that it is seeing demand increase not only in gaming, but for its products in 5G, genomics, robotics, and autonomous vehicles.

Have You Downloaded Your Copy of the "Beginner's Options Guide"? [sponsor]
If not, here's your chance to save it to your computer while it's still free. That way you will never have to pay for it again in the future. This guide will get you placing winning trades without you needing to spend hundreds of hours studying. In fact, you can place your first trade on Monday morning after reading my "Beginner's Guide" to trading options. Click here for your copy.