Activision Blizzard (NASDAQ:ATVI) has gone through a tough couple of years. To many investors’ surprise though, Activision Blizzard stock has been quite strong over the past year. In fact, shares are up even so far in 2020, higher by almost 12%.

That comes at a time where the S&P 500 is down 13.3%, as the novel coronavirus causes an economic halt across the globe.

Both Electronic Arts (NASDAQ:EA) and Take-Two Interactive Software (NASDAQ:TTWO) are both up on the year, too.

Can the rally in Activision continue? I think it can, for three main reasons. 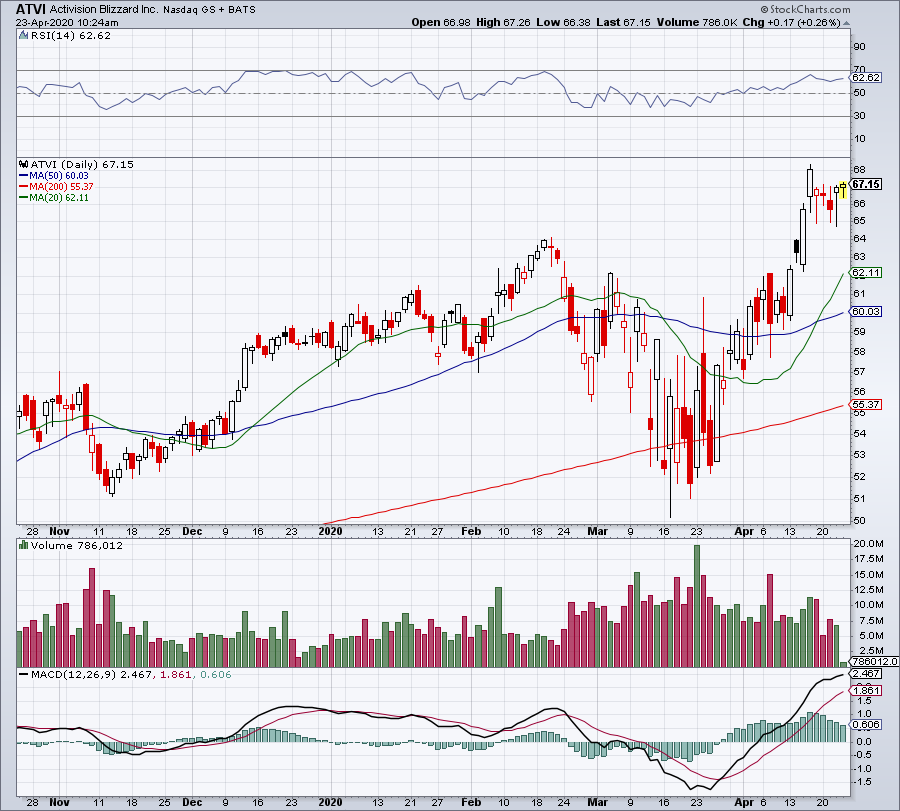 As the broader market remains under pressure, Activision has had a constant bid under its stock. That action is attractive to bulls, who would obviously rather own a stock that’s going up than a handful of others that are going down.

Of course, that knife cuts both ways, as so-called “coronavirus stocks” have the potential to retreat once stay-at-home orders begin to ease. In any regard, the stock’s relative strength is worth digging into a bit more.

I want to point out one other observation as well, to highlight that the outperformance in Activision Blizzard stock isn’t due to just coronavirus. Going back to the December 2018 low in the S&P 500, to its high on February 19th 2020, ATVI stock barely edges out the index, up 38.7% vs. 37.2%.

But virtually any other time between then and the index’s high in mid-February, ATVI has outperformed the broader market and has done so by a fairly wide margin. For instance, from one year ago on April 23 to the index’s high on Feb. 19, Activision is up 38.4% to the S&P 500’s 15.4% gain.

Many aren’t surprised by the current relative strength in Activision Blizzard stock. However, many are likely surprised to hear of its outperformance over the last 16 months, particularly when basing it on the absolute best time to own the S&P 500. In any regard, it would be false to say there haven’t been short-term catalysts in play too.

Investors are stepping up and buying Activision because it’s seeing a bump in sales and engagement due to the coronavirus. We know stay-at-home orders are forcing consumers to look at in-home entertainment options, as evidenced by Netflix’s (NASDAQ:NFLX) recent earnings report. Even though analysts knew it had strong signups, the company almost doubled expectations by adding 15.77 million new customers in the quarter.

We don’t have to make a guess based on Netflix, though. We already know video games are doing well. March 2020 sales were the best for the month since 2008. Hardware and software sales both experienced a jump, with game sales and consoles doing well.

Beyond the Short-Term Bump

Gaming has been a secular trend for some time now. Those that thought millennials would grow up and put down the video games were wrong. As younger gamers continue to enter the mix and as E-sports continues to gain momentum — and in some cases, mind-boggling momentum — older generations aren’t giving up their controllers. Those who grew up on gaming keep on gaming, and that’s what has kept this industry alive and thriving.

With Activision Blizzard’s deep library of gaming content and leadership, expect the stock to keep on chugging higher over the long-term. In that realm, mobile will play a large role in the company’s future as well. As CEO Bobby Kotick said near the end of 2019, “We have 350 million users in 190 countries… I see no reason that number shouldn’t be 1 billion in five years.”