Coronavirus finally got kicked from the headlines…

Yesterday, the crisis in the oil market took center stage. With demand falling, capacity filling up, and a bit of wonkiness in the futures market, prices actually went negative on Monday.

Oil prices won’t stay negative, of course. And I’m sure you’re wondering where they’re headed next. But the more important thing is what this decline means for the companies that produce it.

Unfortunately, oil and gas producers are tied to what they sell. It’s that simple…

If oil prices fall below a certain level, oil producers run at a loss.

And eventually, some of them will go out of business.

There’s no way to get around it.

And no matter where oil settles after this week’s crash, that’s the reality many oil producers are facing today.

The cost to produce oil is higher than what they can sell it for.

The entire sector is in a massive downtrend as a result.

And history says those lows could lead to double-digit losses from here.

The crash in oil prices has absolutely crushed these companies. And we are seeing decade-plus lows in this sector because of it.

Importantly, history says the pain isn’t over yet…

You see, the index hit a new 52-week low in March. And it’s currently trading at its lowest level since 2003. Take a look… 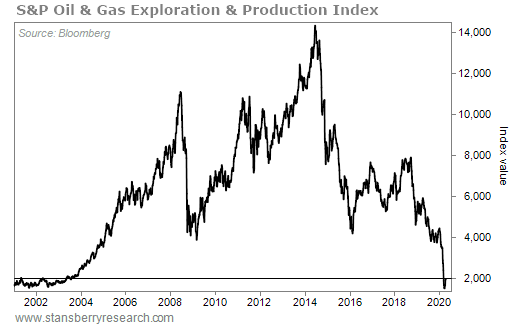 The collapse in the oil market is hitting these companies directly. They can only wait for the oil price to turn around before things ease up.

With oil prices still down dramatically, these producers remain at decade-plus lows. And history says this is a bad sign going forward.

Since 2000, similar new 52-week lows have led to further losses in the sector. Two decades worth of data points to another 14% fall from here. Check it out…

Overall, the sector has been a lousy performer. It’s just barely up from its late-2000 levels. But buying this sector after a new 52-week low is even worse…

These rare occurrences have led to another 8% loss over one month and a 14% loss over the next three months. That’s a big drop in a short period of time.

Simply put, oil and gas producers are in trouble. Oil prices have crashed, and then crashed again… going negative for the first time ever.

After this historic fall, it might seem like a good idea to bottom fish on the companies that produce oil. But these businesses are in rough shape right now. And history says that’s the wrong thing to do.

The reality is that more pain is likely in the short term. That means you should avoid this troubled sector for now.