It’s time for some brutal honesty…

In late 2018, I warned readers not to make a truly boneheaded investing mistake. It’s one that’s easy to laugh at after the fact… but just as easy to fall for in real time.

I knew that my warning probably wouldn’t help next time around, though.

That’s because I figured it would be a long time before such an “opportunity” cropped up again. And even the select few who did read my warning might forget it by the time they needed it.

Well folks… here we are again.

In the last month, investors fell into the same painfully dumb trap. And more of these traps could be waiting just around the corner.

So let’s take time, once again, to explore this investing mistake. Hopefully, it’ll help you avoid becoming the “Greatest Fool”…

We’re in the midst of a crisis… one that has sent investors hunting for opportunities. Love it or hate it, that’s how the markets work.

Today, “social distancing” is the name of the game. And investors are looking for the few companies that stand to benefit from our “new normal.”

Now, don’t get me wrong. That’s not necessarily a bad thing. Some stocks will turn into big winners as companies adapt to this crisis… And it makes sense to look for them.

In fact, some companies seem perfectly positioned for what’s happening. And ZOOM Technologies (ZOOM) sure looks like one of them. I’m guessing you’ve heard about it by now.

It’s the perfect service to keep folks working and connecting in today’s “new normal.” And the company has been all over the news as a result.

There’s a big problem with everything I just said, though. Did you catch it?

ZOOM Technologies has nothing to do with the video-conferencing software we just discussed.

It’s some other technology company… based in China… that hasn’t disclosed financials since 2015!

But that didn’t stop investors from pouring money into it. Check it out… 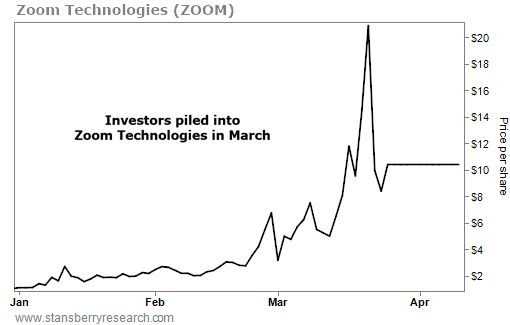 The “wrong” Zoom traded for around a dollar a share at the start of the year. Its market value was less than $20 million. Then it soared nearly 20-fold to its peak on March 20… And its market value grew to more than $300 million.

By then, the U.S. Securities and Exchange Commission (“SEC”) figured out what was going on. It stepped in to halt trading. But for some investors, the damage was already done.

The right Zoom – Zoom Video Communications (ZM) – is thriving this year. It has nearly doubled in value… And it’s shaping up to be one of the few big winners in this crisis.

Now, this may seem like a one-off event, but it’s not. History is littered with examples of mistaken-identity trades.

Back in 2018, I covered how investors got confused in the run-up to a Google acquisition. And I shared how folks piled into a stock with “Tweeter” in its name… on the day that social media company Twitter (TWTR) went public.

In those instances, folks who bought made a foolish mistake. It doesn’t matter what the excuse was. They started clicking away in their brokerage accounts… and bought the wrong ticker without bothering to double check.

I sincerely hope you never make this mistake.

Please, take time to think before you click “buy.” That’s especially true of hot, perfectly positioned companies that you’re just hearing about for the first time. You don’t want to end up becoming the “Greatest Fool.”

And if you have made this mistake… forgive yourself, move on, and don’t make it again.