In uncertain times, history and experience are invaluable resources.

What both are telling me now is that there has rarely been a better time to buy small cap stocks.

This opportunity was created by an epically bad first quarter of 2020 for the small cap sector.

Small cap performance is measured by the Russell 2000 Index, the most popular index of small capitalization stocks.

The first quarter decline of 30.6% in the Russell 2000 was the largest quarterly loss in the more than 40-year history of the index.

Here’s how it looked… 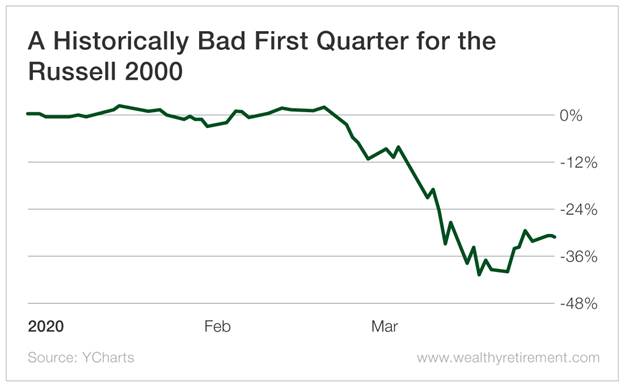 Remember, that isn’t one stock dropping this much. It is an entire index consisting of 2,000 of the finest smaller publicly traded businesses in the United States that has collapsed.

We need some perspective on this decline to really appreciate how rare it is.

We can get that by looking at the last two big stock market collapses, both of which ranked among the worst in history. 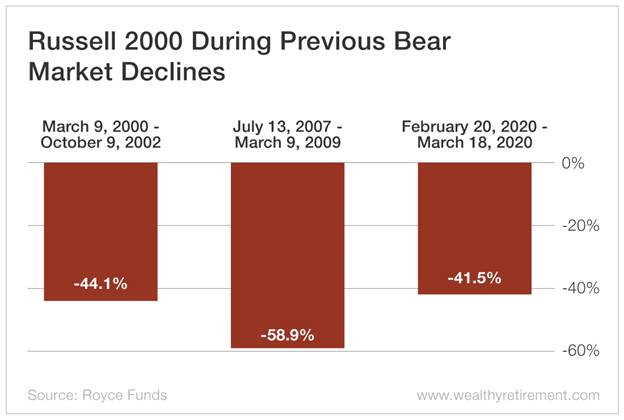 The numbers show that our total current decline in the Russell 2000 measures up with the last two major downturns. What stands out about this decline is the incredible speed at which it happened.

The 41.5% decline that we just experienced is similar in size to the total decline experienced in each of the last two major market meltdowns, both of which took years to play out.

This drop in the Russell 2000 took one month!

The Russell 2000’s first quarter was one for the history books – and not in a good way.

But while we have those history books open, it is well worth looking at what the Russell 2000 might have in store for us.

This history makes for some valuable reading because it alerts us to the fact that this looks like one of the best buying opportunities we are ever going to see.

When small caps bottomed in October 2002, the Russell 2000 rebounded with a vengeance, rocketing 60% higher over the next 12 months. That must have been fun! 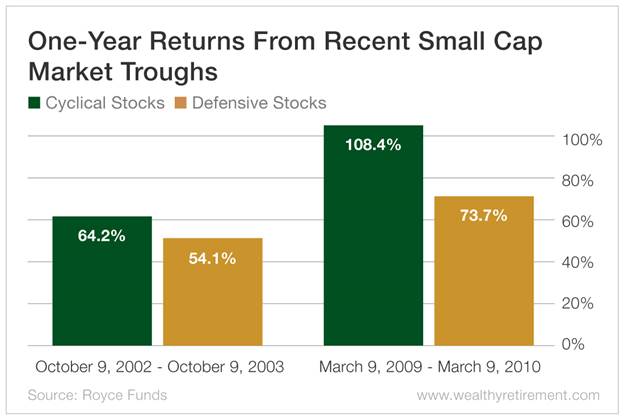 Those are pretty encouraging numbers to say the least, and it doesn’t end there…

That is an incredibly rare occurrence. 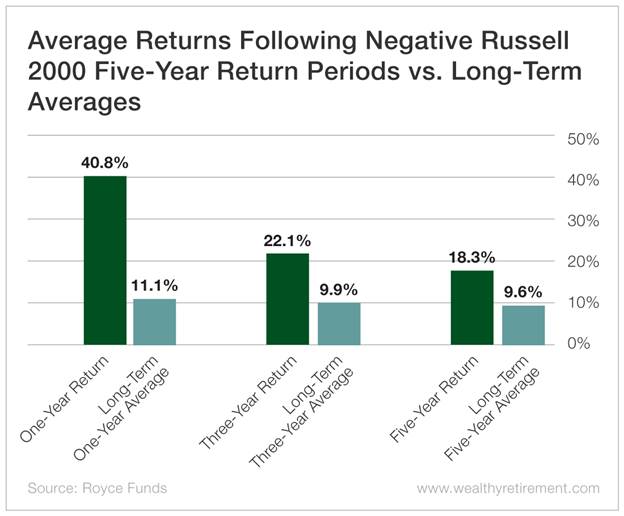 This data is very compelling.

History is telling us that buying small caps today will be a very rewarding experience over the next one to five years.

If the Russell 2000 is poised to have a massive run over the next five years, it doesn’t take a rocket scientist to figure out what to do…

With more exchange-traded funds (ETFs) in existence today than you can shake a stick at, finding one through which to own the Russell 2000 is very easy.

The Vanguard ETF is much smaller and has priced its expense ratio lower to try to attract more investors.

I think both ETFs are interesting opportunities today.