The bear was roused from hibernation and instantly set to work mauling investors.

The Dow Jones Industrial Average, Nasdaq and S&P 500 are plummeting.

Last Monday, the indexes were at their lows and 30% off their highs set on February 12.

A 30% drop over four months is the expectation for a bear market.

So I look at some that either should be avoided or could face potential cuts.

COVID-19 is the black swan that drove a knife into the old bull’s heart. The virus has brought the U.S. economy to a standstill.

Everything is under pressure. But some industries more so than others.

For instance, this period of time has been nicknamed the “9/11 for cruise lines.” Shares of Carnival Corp. (NYSE: CCL), Norwegian Cruise Line (NYSE: NCLH) and Royal Caribbean Cruises (NYSE: RCL) are down more than 65% year to date.

And there’s an asset getting smacked by a double whammy of bad news.

Crude oil has been obliterated. 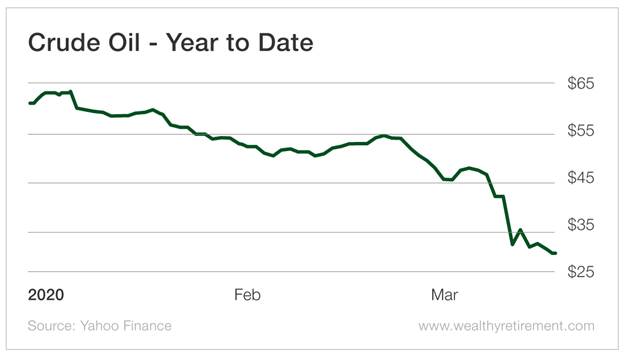 We started 2020 with an oversupplied market, which is why I predicted crude oil would slip to $40 per barrel.

But as COVID-19 shuts down entire countries, it’s taking tens of thousands of barrels per day (bpd) of demand offline.

That alone borders on catastrophic.

But throw in Saudi Arabia and Russia opening the spigots to grab market share and push U.S. shale producers to bankruptcy, and the outlook for crude approaches apocalyptic.

Despite how bad it’s already been for crude, it’s likely to get worse.

Saudi Arabia is launching another “OPEC-alypse,” promising to flood the market with an additional 2.6 million bpd.

And the United Arab Emirates is planning to pump an additional 1 million bpd.

Those two alone will add 3.6 million bpd in supply!

But this is just the first volley in the price war between OPEC, Russia and the U.S.

Think Twice Before Chasing These Yields

What followed was mass bankruptcies and hundreds of billions of dollars in canceled projects.

I think $30 per barrel is here for the foreseeable future. And some whispers are for prices to head as low as $15 per barrel.

Those are prices Saudi Arabia can withstand. But U.S. frackers will go belly up.

Oil field service companies will fold. Offshore well drillers will go under. And there are juicy dividend yields in the energy sector that are in serious jeopardy.

Here are the ones to avoid… 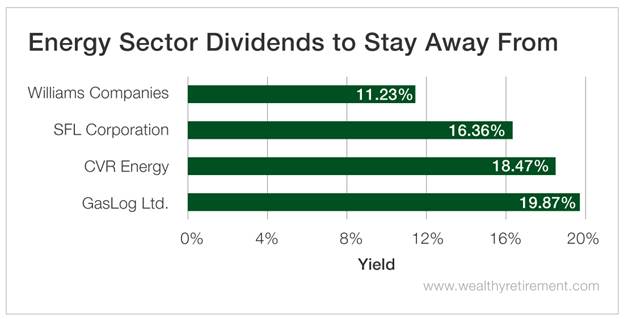 And that gives it a massive 18.47% dividend yield.

But CVR earned $0.44 per share in the fourth quarter while doling out a dividend of $0.80 per share.

For the first and second quarters, earnings per share are projected to fall. And GasLog’s total debt-to-equity ratio is a staggering 203.19 as it’s saddled with more than $3 billion in debt. That’s 10 times its current market cap.

SFL is earning $0.22 per share now, well below its quarterly dividend of $0.35 per share. And though the company enjoyed positive free cash flow of $69.5 million in the fourth quarter, this plummeted to massive losses during the last crude collapse.

In the fourth quarter, it had a dividend coverage ratio of 1.8 after reporting a record year in volumes and transportation capacity.

And though Williams has paid a dividend since 1974, it has reduced the payout before.

During times like this, investors should be building their shopping lists of stocks they’d like to own.

Last Monday, the major indexes fell to their lowest levels in nearly three years. The Dow is trading at June 2017 prices.

Thousands of companies are on sale. And dividend yields are skyrocketing.

For income investors and long-term holders, this sell-off is providing attractive buying opportunities. But the four companies named above are a microcosm of challenges the energy sector will face to keep paying those dividends.

We’ve seen these companies pull back their payouts before. And they may do so again as Saudi Arabia uses its favorite play to bankrupt American energy.