When we started our original write up for this year’s top stock pick with “Please keep your arms and hands inside the ride at all times … 2020 is going to be a tumultuous year,” we had no idea just how wild things were going to get on Wall Street.

We thought the presidential election and the impeachment of President Donald Trump were going to have the greatest impact on the market during the first part of the year.

But those landmark stories have been completely eclipsed by the coronavirus from China.

The pandemic and the world’s response to it have impacted everything from bonds and commodities to currencies and stocks — including our pick for this year’s top stock: Disney (NYSE:DIS) stock.

In fact, DIS stock has been impacted in a variety of fascinating ways by government, trader and consumer responses to the pandemic.

DIS stock has been caught in the selling whirlwind on Wall Street that officially pulled the U.S. stock market into bearish territory in mid-March. The S&P 500 dropped more than 20% from its all-time high of 3,393.52 on Feb. 19.

This bearish pressure has reset stock valuations across the board. We are anticipating a rebound later this year, but it is unlikely we will see a return to the highs.

Social-distancing guidelines and shelter-in-place orders have also impacted DIS stock. When it became apparent that individuals had to avoid contact with each other and gathering in large groups, Disney made the decision to close its theme parks.

This was a huge blow to the company. Disney’s U.S. and international theme park and hotel business is currently responsible for more than 34% of the company’s revenue and 37% of its earnings. We had expected these numbers to remain strong during 2020, but we’re not confident of that anymore.

Yes, Disneyland and the other theme parks are going to reopen. But there’s no telling how quickly patrons are going to flock back to the parks.

Hopefully everybody will be sick and tired of social distancing and will want to get back to their regular vacation plans. However, with the income that is likely to be lost by consumers during this crisis, an expensive Disney trip might not be in the cards this year.

Disney hiked admission prices by 8% in the run up to the opening of the new Star Wars Galaxy’s Edge at Disneyland and Walt Disney World. We wouldn’t be surprised to see the company start offering discounts to attract patrons this summer.

Today, Disney is taking its cues from the success of the recurring subscription revenue model and is making movie franchises.

For example, Frozen was incredibly successful, so why not release Frozen II ?

Unfortunately, Disney can’t make as much money — even with its movie franchises — if people aren’t going to movie theaters.

The company has tried to combat this by releasing some of its new movies, like Frozen II, to streaming services early. But it has had to delay the release of other movies, like Mulan. This will delay the revenue generated by those movies.

The primary reason we were so excited about DIS stock this year was the company’s adoption of the subscription model to generate revenue.

Disney hasn’t always taken advantage of the subscription model to generate consistent revenue. It used to be much more reliant on big one-time product launches and movie releases. But it has been slowly building into a subscription model powerhouse during the past few years.

Disney first dipped its toe into the subscription model with its media networks. The company started with the Disney Channel and then slowly expanded to include Disney Junior and Disney XD. These channels bring in regular subscription revenue from the cable, satellite and now streaming packages that bundle them in.

Disney’s most successful media network revenue generator by far is ESPN. Live sports still attract a lot of eyeballs in this age of on-demand television. This enables Disney to still charge a premium for ESPN.

However, Disney isn’t looking to simply sit back and collect regular revenue from other cable, satellite and streaming media providers. It is making a big push to go direct to consumers.

Disney started its direct-to-consumer gambit by joining the Hulu group in 2009. There were some growing pains, but Hulu has since emerged as a powerhouse.

In March 2019, Disney became the majority shareholder in Hulu when it bought 21st Century Fox. Shortly after in May 2019, Comcast (NASDAQ:CMCSA) relinquished its remaining control.

But gaining control of Hulu wasn’t enough for Disney. It decided to take on Netflix (NASDAQ:NFLX), HBO and others head on with Disney+, and it knocked it out of the park.

After its first day of operation in November 2019, Disney+ had more than 10 million subscribers. And that was just the beginning. Disney+ was adding new subscribers at a rate of 1 million per day in late-2019, and that was before everyone was social distancing.

We haven’t gotten official numbers from Disney, but we anticipate subscriptions to Disney+ have jumped in early 2020 as people have been sitting at home trying to find something to watch.

Bottom Line: DIS Stock Is Still one of the Best Stocks

After dropping to support at $80 (see the chart below), DIS stock has started to rebound. 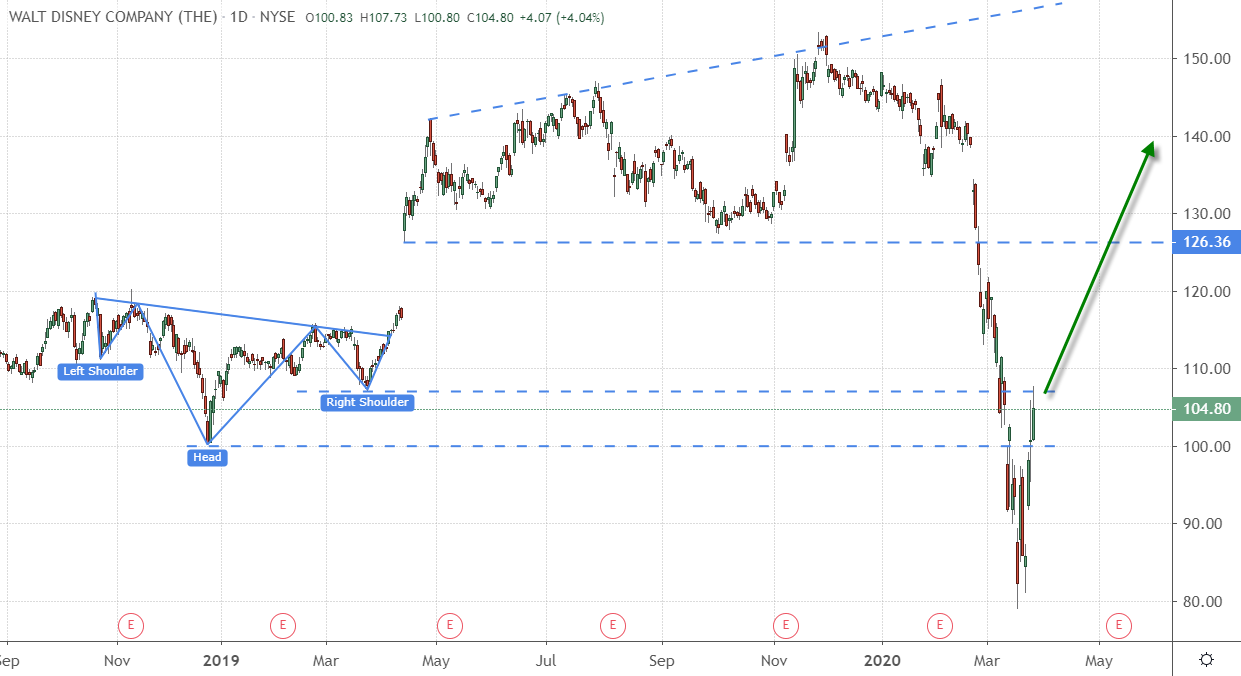 We’re anticipating more volatility as Wall Street works its way through the coronavirus pandemic. But we wouldn’t be surprised to see DIS stock back in its trading range between $130-$150 before the end of the year.