The bull market is officially dead, with the Dow Jones Industrial Average dropping over 20% from its record high. What was born on March 9, 2009 has officially ended just days after its 11th birthday. Time to seek safety with some dividend stocks.

The carnage is hard to fathom: The fastest pullback in history driven by a combination of global oil price and the worst global pandemic since the Spanish Flu.

And it is kryptonite for the everything bubble that has been fueled by cheap moneys stimulus. More action by the central banks won’t stop the pullback. We need vaccines and a cure.

Until then, fear and panic will continue to spread. President Donald Trump announced a travel ban on flights to Europe. Washington State has outlawed large gatherings. The hit to the economy is just beginning.

As a result, a number of dividend-paying stocks are starting to post jaw-dropping yields as prices fall fast. While many payers, especially in the energy sector, are likely to have to cut payouts as profitability sinks, there are some gems to be found. But not all energy stocks are the same. And not all are likely to need to make deep distribution cuts to protect cashflow.

Here are four in the “midstream” infrastructure and transportation arena that are worth a look for deep value buyers seeking some safety income: 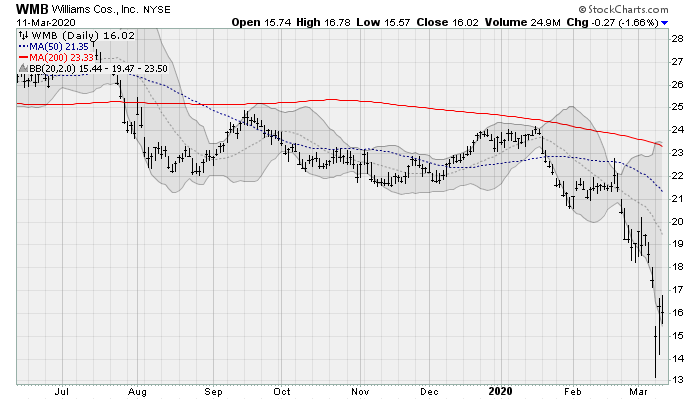 Williams (NYSE:WMB) is a middleman focused on processing and compressing natural gas. It’s a volume play on natural gas use to heat homes and generate electricity. It’s thus largely unaffected by the price war in crude oil underway right now.

Sure, some compression of revenues is likely. But profitability can take it with gross margins of nearly 75%, a 6.1% return on equity, and a whopping 10% dividend yield at current prices.

The stock was recently initiated with an equity-weight rating at Morgan Stanley. Barron’s also highlighted the stock in their recent “Best Income Investments for 2020” list. 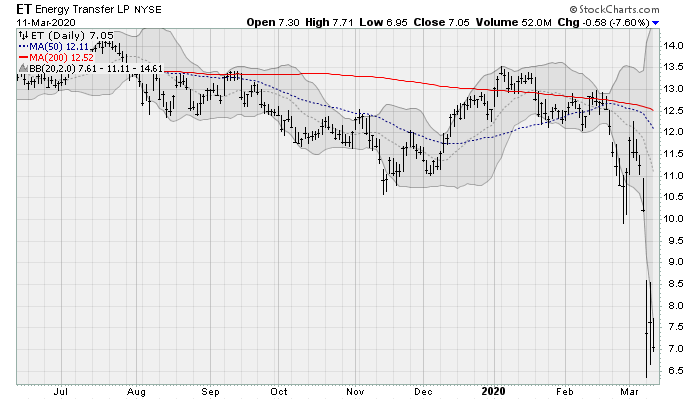 Energy Transfer (NYSE:ET) owns and operates more than 9,000 miles of natural gas transportation pipelines, three natural gas storage facilities in Texas, and 12,200 miles of interstate pipelines. The company collects natural gas from wellheads and helps deliver it to power plants, industrial users, and more. The company recently completed its acquisition of SemGroup Corporation, which is expected to unlock efficiencies of more than $170 million.

Morgan Stanley initiated coverage with an overweight rating back on Jan. 6. The company pays a dividend yield of 17.3% and trades at just a 5.1x price-to-earnings multiple with a 27% gross margin. 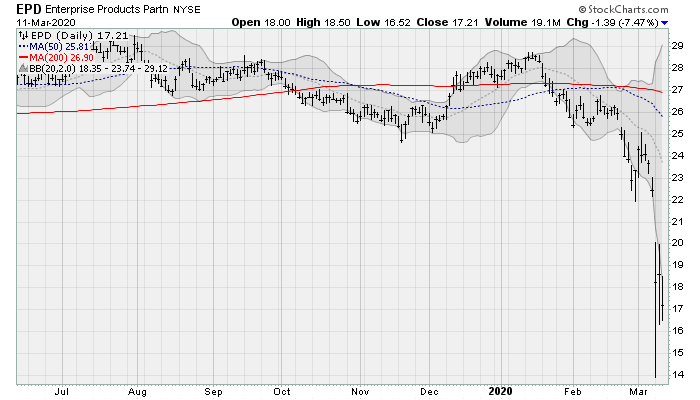 The company pays a 10.3% dividend yield and enjoys a 27% gross margin. Analysts at Piper Sandler are looking for a $24 price target, which would be a double from here. Back in January, analysts at Morgan Stanley initiated with a $32 price target and a buy rating. 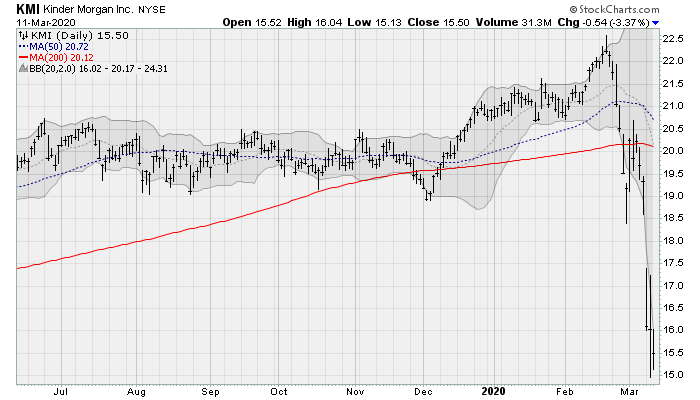 Kinder Morgan (NYSE:KMI) owns and operates roughly 83,000 miles of pipeline and 147 energy terminals thanks to history going all the way back to 1936. The company has been chipping away at its debt load in recent years, dumping non-core assets and generally putting its balance sheet in order. Valuations look good now, with the price-to-book ratio at just over 1x.

The company pays a 6.5% dividend yield and enjoys a 56% gross margin. The company was recently upgraded by analysts at Bank of America Merrill Lynch amid the market carnage. Management raised its dividend by 25% on Jan. 23.