An important aspect of any technology is speed. After all, who wants to stay stuck in the days of dial up internet? 5G is speeding things up in a big way, as it allows for massive downloads of data and virtually eliminates lag time.

So, to stay relevant companies have to innovate just as quickly.

While some companies are going through those changes right now, others are ahead of the curve.

And when it comes to Wall Street, those companies ahead of the curve are going to be the ones the “smart money” flocks to.

One company that Wall Street is very interested in right now is Atlassian Corp. (NASDAQ:TEAM), which, interestingly enough, is actually named after the Greek god Atlas. Founded back in 2001, TEAM is the company behind Jira 1.0. Then Confluence 1.0.

Jira is a software development tool that enables teams to prioritize and track software plans, to release and ship software and to track and analyze data. Confluence is an open and shared workspace platform that allows teams to create and collaborate in one place.

A few of the company’s products include: Jira Software, a software development tool used to prioritize and assign tasks; Jira Core, project management software; Statuspage, a tool to track incidents and the process to rectify any issues; Confluence and Trello, software that allows teams to create and share projects in one space; and Bitbucket, Bamboo, Crucible, Fisheye and Sourcetree, products used to build software and improve coding.

What’s especially interesting about TEAM right now is its tie to 5G. The company is the leader of its corner of the software market, and its integration systems, which can run through servers or the cloud, are both 5G accessible. The company is going back to its roots of service and support to upgrade its products for 5G.

5G will allow for even faster speeds and the ability to handle a much higher capacity for informational processing for all of Atlassian’s products. As the company’s services begin run even smoother using 5G speeds and support a much higher capacity of informational processing because of 5G, the company will grow exponentially while still keeping its roots of service and support at the forefront.

Right now, several stocks are displaying exciting potential with the progress of 5G, and TEAM is one of the companies we’re targeting in my Project Mastermind for Accelerated Profits.

But just because a company has a revolutionary idea does not always mean it’s a good investment. So, before I recommend it in Accelerated Profits or any of my other services, TEAM had to pass my fundamentals grading system.

There are eight fundamental factors in total, as well as my proprietary measure of money flow into the stock, market sentiment and a few other factors, which is reflected in the Quantitative Grade. And the results can be found in one, handy place: my Portfolio Grader tool.

I sometimes call my Portfolio Grader the “secret sauce” of my stock analysis because it can determine big winners from big losers at the simple click of a button. 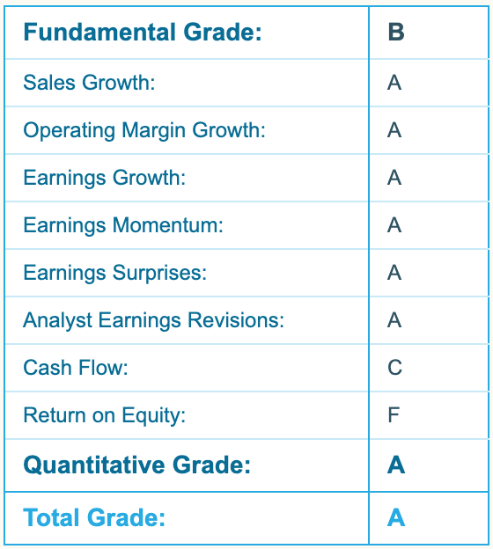 TEAM’s report card is a great indicator for the company. As you can see, TEAM’s Quantitative Score is an A, and it scores an A not only for Sales Growth, but on all of my profitability factors as well. This is due to TEAM recently releasing its earnings results — and the stock has been trading very well since they were posted.

During the fiscal second-quarter, TEAM’s revenue soared 37% year-over-year to $408.7 million, up from $299 million in the same quarter a year ago. Analysts were expecting revenue of $388.93 million, so TEAM posted a 5.1% revenue surprise.

Atlassian Corporation also noted that it added more than 5,000 new customers. The company’s total active subscription count is now 164,790. The company also revealed that its Atlassian Marketplace achieved a new milestone, as it surpassed $1 billion in sales since its founding in 2012.

The stock reached an all-time high of $150.71 on January 24, the day after the earnings were posted, which represents about a 13% increase from previous close. The market seems to really like Atlassian Corporation right now and so do I. Not only does it pass my Portfolio Grader requirements, but the company still maintains its authenticity while continuing to grow and adapt to new frontiers like 5G. This is the perfect formula for an Accelerated Profits stock.

This Stock Is a Buy Despite the Coronavirus Impact

Caution: There Could Be More Pain on the Way for Silver

The 1 Move You Must Make During the COVID-19 Crisis

Upgrades and Downgrades for Tuesday, 4/7

Where Stocks Are Headed Next