The investment world blamed coronavirus for the recent mini-slide in stocks. But there’s a better explanation.

The rubber band was stretched to its limit in the U.S. market…

In the short term, that was a sure sign that stocks would snap back… And they did. The S&P 500 fell 3% over two weeks.

But stock prices have come roaring back up. And there’s good reason to expect that to continue… with solid gains in 2020.

That’s because buying after an extended move like we saw last month has historically led to double-digit gains over the following year.

It’s just one more reason to expect a Melt Up in U.S. stocks.

If you want to know where stocks are headed, you need to understand the trend.

The S&P 500 had been steadily above its 200-DMA since June. And after the recent run-up, it hit its highest level above this moving average in years. 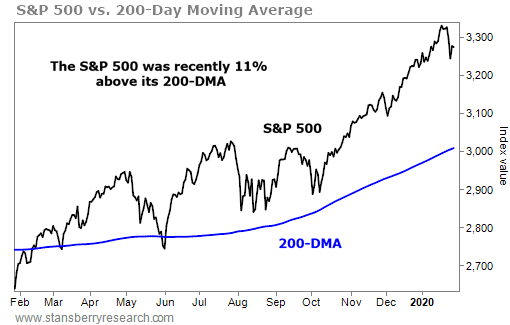 The S&P 500 has made a sweeping move higher since the end of 2018. And after the recent jump since October, the index moved well above its 200-DMA.

This kind of separation has happened roughly 10% of the time going back to 1990. And again, it isn’t a reason to panic.

We’ve already seen a small fall in stocks thanks to this overextended move. But history says the picture looks bright over the next year. Check out the table below…

It might feel wrong to buy U.S. stocks after such an extended rally… But history says it’s a good idea.

A typical annual return for the S&P 500 is 7.7% going back to 1990. But buying after a situation like today’s crushes that buy-and-hold return.

Similar cases have led to 2% gains in three months, 5% gains in six months, and an impressive 13% gain over the next year.

So yes… the recent uptrend is stretched. It has already caused a small pullback in stocks. And that could happen again in the coming weeks. But looking out over the next year, history says we have major upside potential.

This plays perfectly into the Melt Up scenario my boss Steve Sjuggerud has been writing about. We could easily see double-digit gains in stocks this year… and potentially even more.

That means the wisest advice is to stay long stocks now.

Dividend Growth Stock of the Month for March 2020

The Most Powerful Wealth-Building Tool for “Buying Low”