I work with some of the most exciting small tech companies on the planet. And as many of you know, I’ve made it my business to be involved with the most cutting-edge high-tech advancements of our time.

That’s why I can confidently tell you that nothing compares to the size and scope of the solar revolution – or the speed at which it’s coming to us.

In fact, it’s going to be one of the biggest technological transformations of our lifetime.

The reason why comes down to basic science.

The fact is every five days, the sun provides the Earth with as much energy as all the proven supplies of oil, coal, and natural gas on the entire planet.

And we are now riding a tremendous wave of advancements and new technology that could soon render these traditional means of generating electricity obsolete.

To put it bluntly, recent solar innovations promise to be every bit as monumental as when the world progressed from the horse and buggy to the automobile…

According to Bloomberg, the oncoming solar revolution will be worth $2.2 trillion in the years ahead. But it won’t stop there.

This will be a multi-decade trend, creating an incredible long- and short-term opportunity for those wanting to build life-changing wealth.

That’s because our sun is a natural nuclear reactor. It constantly releases tiny packets of energy called photons, which travel the 93 million miles to Earth in about eight minutes.

When photons hit a solar cell made of silicon, they knock electrons loose from their atoms and form an electrical circuit. Multiple cells make up a photovoltaic (PV) solar panel, and multiple panels can be wired together to form a solar array.

Solar arrays then harness the energy for a variety of uses, including generating electricity, providing light, and heating water for domestic, commercial, or industrial use.

It’s beautifully simple and clean, and it’s getting more efficient and affordable all the time.

In fact, since the energy crisis of the 1970s spurred major interest in using solar to produce electricity, rapidly falling prices have made solar more affordable than ever. 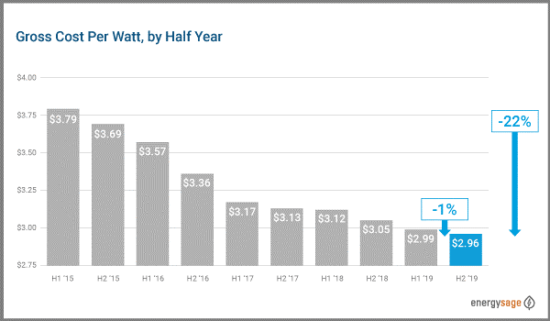 Partly due to the federal government’s 30% investment tax credit, the home solar market in the United States is growing at an average rate of 50% every year.

Right now, there are more than 13.5 million individual solar installations in the United States, ranging from small home rooftop systems to large utility-scale systems that add hundreds of megawatts of clean electricity to the power grid.

Meanwhile, the average price of a fully installed system has plummeted over the last decade, from around $40,000 to $13,500 today after solar tax credits. And you can expect that rate of growth to continue or even accelerate.

On Jan. 1, 2020, a California law stipulated that every newly built house must be equipped with a solar electric system. California builds roughly 80,000 new homes every year. That’s a whopping $1.08 billion annual booster shot to the solar industry.

Yet all this growth is taking place as traditional silicon solar panels have only reached half of their potential. Today, the run-of-the-mill solar panel only operates at 18% efficiency, which means that 82% of the sunlight that hits it is lost and not converted into electricity.

But new, revolutionary technology is coming online that will help solar explode by leaps and bounds. As solar efficiency continues to skyrocket, technological breakthroughs will drive down costs and solar products will become even more widespread.

These advances will quickly drive solar energy abundance into our present-day lives… while it kicks coal, oil, and gas to the energy curb.

Historically, inefficient electrical production has stood as the greatest barrier to large-scale solar adoption. Yet the efficiency of PV cells has improved exponentially since their invention.

Several companies now sell solar panels with up to 23% efficiency, a 5% efficiency increase from standard panels. And that’s only the beginning because even these improvement rates are beginning to be challenged by innovations borne from research and development.

New materials and innovations are now on track to double the performance of PV cells, promising cheap, efficient, and abundant solar energy.

As the price-performance ratio of solar technologies begins to undercut traditional energy sources, we will soon witness the mass integration of solar cells into everyday infrastructure.

Imagine every window and every glass surface capturing solar energy – buildings as tall as skyscrapers completely powered by clean energy, free of any mounts, grids, or solar panel installations.

Within the next decade, commercialized solar-capturing glass could begin to wrap the exterior of every skyscraper, school, and residential rooftop, all while generating abundant, clean solar energy.

Solar panels will be widely installed across urban and semi-urban areas, embedded in our infrastructure, transparent surfaces, and even transportation systems.

New advancements in solar panels will bring this future to fruition. Here are just a few cutting-edge products coming to your neighborhood soon:

This may sound futuristic, but these technologies are all happening as you read this.

Investing in the New Solar Revolution

I’m sure you’re beginning to see that solar is a proven technology. And that makes it an investment that could mean tremendous wealth ahead.

The fact that the means of gathering solar energy have been around for 50-plus years, but are untapped, means there’s a relatively small market for it right now. It was worth only $52.5 billion in 2018, but it’s set to grow into a $2.2 trillion juggernaut.

So if you position yourself and your money correctly, you could carve off the king’s ransom from those profits.

The four companies we’re targeting are a part of these main categories:

And finally, the following four stocks fit the criteria perfectly, providing you with a huge opportunity in 2020… and beyond…

Solar Company No. 1: ABB Ltd. (NYSE: ABB) has one of the widest portfolios of solar inverters – an essential component of every solar array, accounting for roughly 15% of overall costs. Inverters take the direct current (DC) electricity produced by all solar cell systems and converts it to the alternating current (AC) used by all U.S. electric grids. ABB’s extensive range of solar inverters is suitable for the smallest residential photovoltaic systems right up to multi-megawatt PV power plants.

Solar Company No. 4: Siemens AG (OTCMKTS: SIEGY) is the unquestioned leader in developing concentrated solar thermal power plants with over 70 of its plants in operation worldwide. Backed by decades of experience and its reputation as a reliable partner in the energy sector, the company develops and builds state-of-the-art steam turbine generators, instrumentation, and controls. That makes it a one-stop supplier for all key components of solar power plants.

While they offer great value at current prices, these four companies also have immense growth potential. That makes them best in class in solar, both now and for the long term.