Boeing Co. (NYSE: BA) has made headlines over the past year and a half for all the wrong reasons.

These tragedies resulted in 346 people losing their lives and the eventual grounding of all Boeing 737 Max planes worldwide.

Anti-stall and flight control software malfunctions and the need for proper pilot training were cited as reasons for the crashes.

The 737 Max grounding set off a chain of costly events that puts Boeing’s historically consistent dividend at risk of being cut.

The company currently pays a $2.055 per quarter dividend for a 2.58% yield. Its dividend has increased in each of the last eight years and has grown by 23% over the last five years. 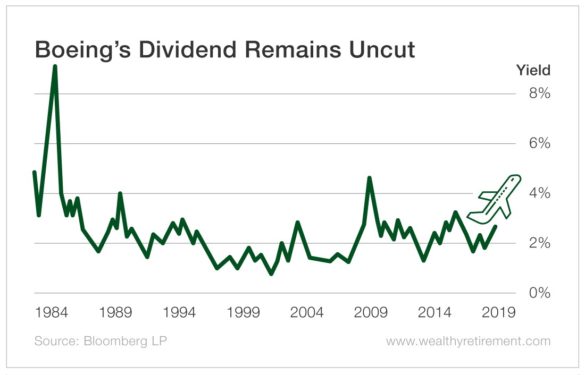 But will that continue?

Boeing stopped delivering the 737 Max to customers in March 2019, causing revenue to drop sharply by 24%. This led to the company’s first reported annual loss since 1997.

Furthermore, Boeing will pay $2.6 billion to customers hurt by the grounding, with more compensation expected.

The 737 Max production was halted in December and is projected to resume in June or July of 2020. However, this deadline has been pushed back time and time again.

Just restarting 737 Max production operations alone is expected to increase costs by an additional $4 billion in 2020.

On top of the software issues, pilots must be re-trained in a simulator before the plane can be re-certified, and European regulators are rumored to want changes made to wiring to avoid short-circuiting.

All of this came to a head in December, when Boeing fired CEO Dennis Muilenburg and replaced him with board member Dave Calhoun.

Calhoun has approached the 737 Max crisis with transparency and what he believes are realistic expectations of production continuation compared with the previous regime’s seemingly negligent and reckless tactics handling the crisis.

In the January earnings call, Calhoun said the company will not cut its dividend in 2020. With so much uncertainty surrounding the business, it might be difficult to buy into his confidence. 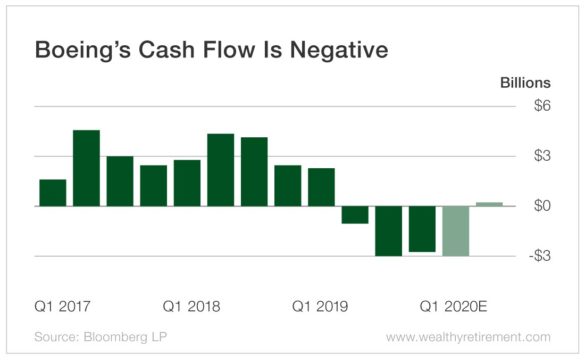 In January, Boeing took out a $12 billion loan from a conglomerate of banks in order to shore up any short-term cash issues. This will provide some security for dividend payments.

The general public is aware of the 737 Max issues and may be skeptical about flying on the plane, leading airlines to not purchase it in the future. If this escalates, Boeing may be forced to come up with some clever rebranding or hope the doubts are quickly assuaged.

In our SafetyNet Pro grading system, Boeing received a low grade due to its present free cash flow and high payout ratio issues. If you are to believe analysts’ expectations, this will be reversed over the course of 2020.

After all, Boeing is an economic behemoth and stalwart of great production capabilities. It’s hard to see such a world-renowned business suffer a dividend cut…

But this dividend rests upon the company’s ability to get the 737 Max production running again, deliver idle Max planes to customers and re-certify with regulators.