Maximus (NYSE: MMS) is classified as a member 0f the specialty business services industry. The company provides business process services to government health and human services programs all over the world. Maximus is headquartered in Reston, Virginia and it was founded in 1975.

Maximus’ earnings have grown at a rate of 10% per year over the last three years while revenue increased by 4% per year.

The most recent earnings report showed much better growth with EPS up 31% and revenue up 35%.

The company is expected to report earnings again of February 6, so you will want to be aware of that report.

The management efficiency measurements are solid with a return on equity of 21.3% and a profit margin if 11.3%. It is also worth noting that the company doesn’t have any long-term debt.

Looking at the sentiment indicators for Maximus we see that there are only six analysts covering the stock at this time. There is one “buy” rating and five “hold” ratings. This tells us two things—the stock is off the radar to some degree and there is some pessimism from those that have it on their radar. 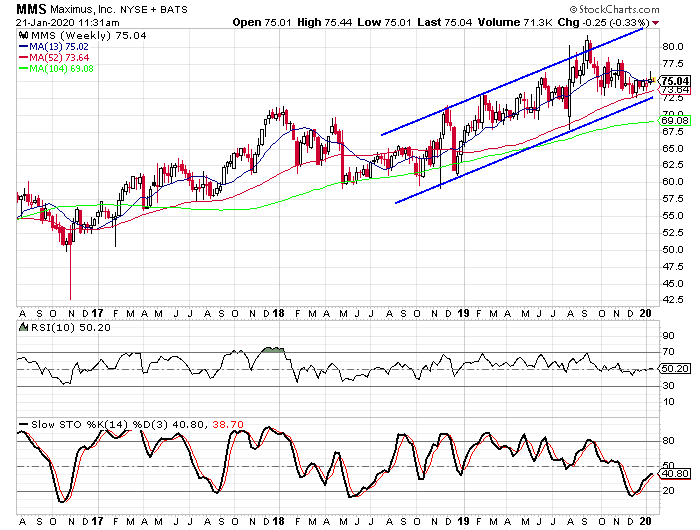 The weekly chart for Maximus shows that the stock has been moving higher over the last fifteen months or so and a trend channel has helped define the various cycles within that trend. The stock is currently close to the lower rail of the channel.

Something else that stands out on the chart is how the stock appears to be using its 52-week moving average as support over the last few weeks. The stock did the same thing in mid-2017 before jumping over 20%.