Akamai Technologies (Nasdaq: AKAM) – is based in Cambridge, Massachusetts and was founded in 1998. The company is a cloud-based software firm that provides application software that allows users to deliver, optimize, and secure online content.

Akamai has seen its earnings grow by 19% per year over the last three years and they were up 17% in the third quarter.

Sales have increased at a rate of 8% per year over the last three years and were up 7% in the third quarter.

Analysts expect earnings for 2019 as a whole to show growth of 21% while sales are expected to increase by 5.8%.

The company’s management efficiency measurements are above average as well. The return on equity comes in at 18.7% and the profit margin is at 27.4%.

The sentiment indicators for Akamai show that the stock has plenty of doubters. There are 22 analysts covering the stock currently with 11 “buy” ratings, nine “hold” ratings, and two “sell” ratings. This puts the buy percentage at 50% and that is well below average. 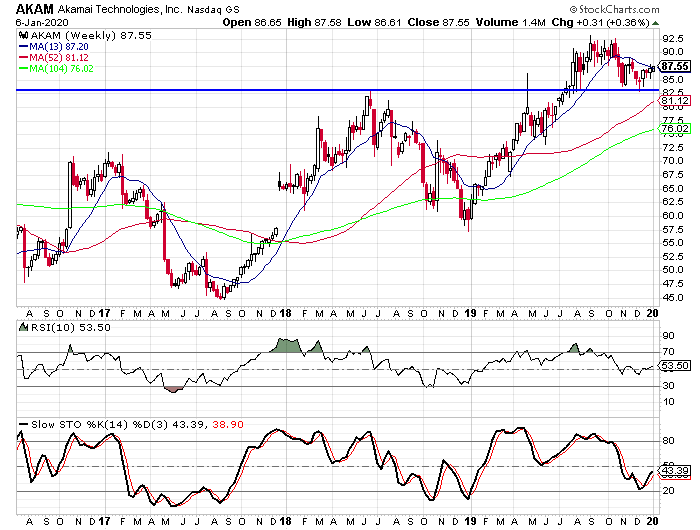 What we see on the weekly chart is that Akamai rallied sharply for the first eight months of 2019 before pulling back in the fourth quarter.

This pullback brought the overbought/oversold indicators down out of overbought territory. In the case of the weekly stochastics, they moved down close to oversold territory before making a bullish crossover.

We also see that the stock seems to have found support in the $82.50 area. This area could be key as it acted as resistance back in mid-2018.