When we held the First Annual NICI Retreat in Las Vegas, we knew Sin City was going to be tough to beat. But turns out the next “hot spot” for a cannabis retreat could be… Massachusetts.

First, at the end of November, there were only 36 recreational dispensaries open in the state.

There’s not even a single recreational dispensary currently open in Boston.

Compare that to Colorado. When legal recreational sales went live there, it generated $300 million with 306 retailers licensed in 2014.

Nevada’s recreational sales reached $434 million in its first year of adult-use legalization, but it also had 61 licensed retailers.

So, Massachusetts’ $400 million in sales is very significant for cannabis profits.

Sales are really going to kick into overdrive in 2020. Fortunately for us (if you’ve been following along), we already own one of the best cannabis companies operating in Massachusetts…

The Cannabis Landlord in Massachusetts

When we first launched the National Institute for Cannabis Investors, one of the first reports I sent out was about Innovative Industrial Properties Inc. (NYSE: IIPR).

I thought this was a perfect introductory cannabis stock; it’s profitable, pays a dividend, and is traded on a major U.S. exchange.

Now there’s even more to like about Innovative. It’s working with one of the best cannabis companies in the world – which could lead to even more expansion in the booming Massachusetts market.

You can see from the map below that Innovative Industrial is starting to build a stronghold on the East Coast. 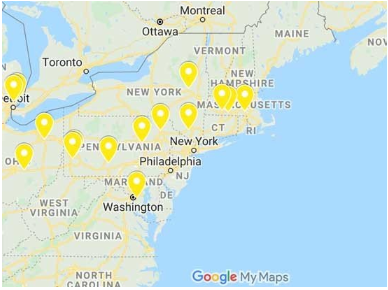 Three of those properties are in Massachusetts. One of its tenants that I want to focus on today is Trulieve Cannabis Corp. (OTCMKTS: TCNNF).

Trulieve is perhaps the best example of a company that understands the licensing process from front to back.

CEO Kim Rivers has an extensive background navigating mergers and acquisitions. She utilized her skillset quickly; she opened the first cannabis dispensary in 19 different municipalities in Florida.

Rivers took a look around at the potential legal roadblocks, then took initiative by fighting the original cap on dispensaries in Florida.

In a genius move, she attacked the 2017 law that limited the number of licenses for each operator.

That number was set at 35. Rivers argued that because she already had licenses before the law was established, those shouldn’t count toward the cap.

Rivers expects to have 44 stores open in Florida by the end of this year, maintaining her company’s status as the largest dispensary network in Florida.

But Rivers has ambitions beyond Florida, and her eye is on the Massachusetts market.

Back in 2018, Trulieve bought Life Essence, which is a seed-to-sale cannabis firm.

This is almost like owning two great companies for the price of one.

Remember that as a shareholder, you are a part-owner in IIPR. Each time Trulieve makes a rent payment, it isn’t just paying Innovative Industrial.

That’s why IIPR is shaping up to be one of the best cannabis investments for 2020.

And I’ll be sure to keep a close eye on these two companies as well as Massachusetts’ growing cannabis market for the latest updates and profit opportunities.