It also develops software design tools to program the PLDs.

The company is based in San Jose, California and was founded in 1984.

The best part of Xilinx’s fundamental analysis is the management efficiency measurements.

The company sports a return on equity of 34.2% and a profit margin of 32%. Both of these figures are well above average.

The sentiment toward Xilinx is mixed with analysts rather bearish and short sellers somewhat bullish. There are 27 analysts following the company at this time with only 11 “buy” ratings. There are 15 “hold” ratings and one “sell” rating. This puts the overall buy percentage at 40.7% and that is well below average.

The short interest ratio is at 1.75 currently and that is slightly below average and indicates a certain degree of optimism.

Xilinx has been hurt by the ongoing trade war between the U.S. and China, so with the first phase of the agreement being reached late last week, we could see the stock and the company benefit.

The weekly chart shows how the stock has trended lower after peaking in April. The thing that caught my eye was how the stock found support at the 104-week moving average a few weeks ago and then bounced back. 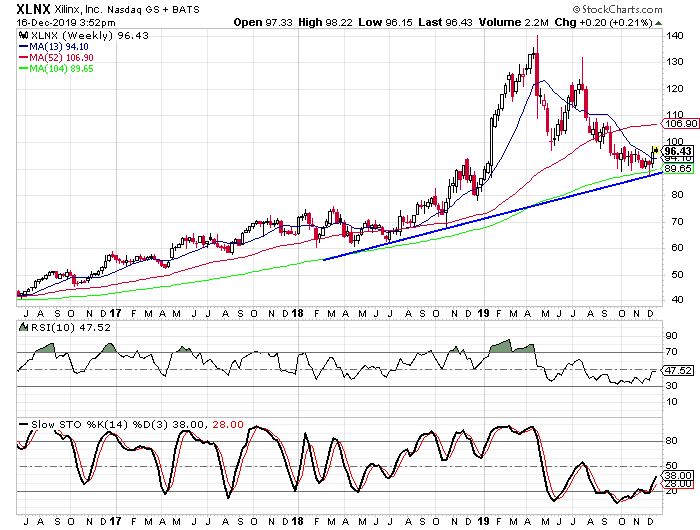 The weekly stochastic readings were in oversold territory for an extended period over the last few months, but they have turned higher now. The readings were at their lowest levels of the past three and a half years in September.

In addition to the support from the 104-week moving average, there is a trend line that connects the lows from 2018 and that trend line also came in to play two weeks ago. I look for the stock to rally sharply over the next few quarters.