Progressive Corp. (NYSE: PGR) – is a property and casualty insurer based in Mayfield, Ohio. The company was founded in 1937 and offers coverage on automobiles as well as home insurance.

The commercial division of the company offers vehicle coverage for small businesses as well as liability and worker’s compensation coverage.

Progressive has seen strong earnings and sales growth over the last three years with earnings growing at a rate of 55% per year while sales have grown by 18% per year.

Sales were up by 12% in the third quarter, but earnings slipped by 10%.

The sentiment toward Progressive is split with analysts being rather bearish on the stock while short sellers are somewhat bullish on it. There are 21 analysts covering the stock at this time with 11 “buy” ratings, nine “hold” ratings, and one “sell” rating. This puts the buy percentage at 52.4% and that is lower than the average stock.

The short interest ratio is at 1.6 and that is below average. This reflects a certain degree of bullish sentiment toward the stock.

The weekly chart shows how Progressive has been trending higher since late 2016. The stock has seen a trend channel form over the few years and it just hit the lower rail of the channel with a pullback during the third quarter and the early part of the fourth quarter. 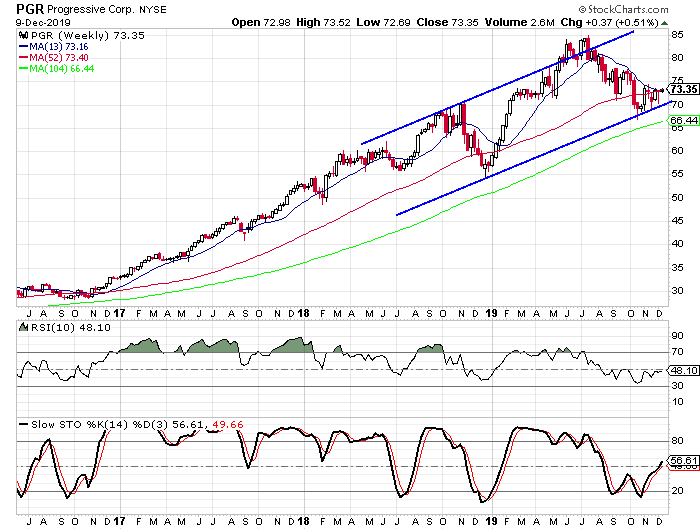 Based on the weekly stochastic readings, the stock hit oversold territory in August and in October. The stock has since turned higher and the indicators have shifted in to an upward trend.

I couldn’t help but notice how the chart looks like last year. The stock dropped below its 52-week moving average during the fourth quarter and then recovered. The 13-week moving average came right down to the 52-week before turning higher in the first quarter of 2019. We see that the 13-week and 52-week are right on top of one another right now and the stock looks as though it is getting ready to cross bullishly back above both of the moving averages.