“I’m scared, Steve. We’ve got the trade war, impeachment proceedings, and plenty of other uncertainties. Not to mention most folks are expecting a global recession to begin any time.”

“Plus, the market has been flat for months… Is your Melt Up ever going to arrive?”

Wow! That’s a lot of negativity.

And even after the last few weeks, when stocks rocketed to new all-time highs, those big overarching problems still exist. Plenty of folks are still worried.

It’s tough to know what to make of everything that’s going on. So today, we’ll take a close look at what’s really happening out there.

I think you’ll see that if you take a step back, things are much better than most realize…

First of all, stocks have now been hitting new all-time highs for most of the last month.

That, my friend, is a bull market. And let’s size up this bull market for just a moment, before we think about how to proceed… 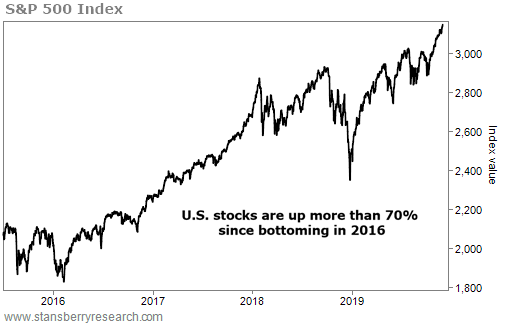 Looking at a shorter time frame… The market is up roughly 35% from its Christmas bottom. That’s less than a year ago!

So now, instead of asking when the Melt Up will arrive, I expect folks will be asking an entirely different question: “The market is hitting new highs – shouldn’t I be scared?”

You might think that stocks reaching an all-time high would be bad news. When you’ve reached the peak, how much higher can you go?

It turns out, we’re not talking about mountain-climbing here…

It turns out, stocks were up – a lot.

If you were simply a “buy and hold” investor, you would have made 7.7% a year on stocks during that time (not including dividends).

However, for the 52 weeks after a new high, stocks outperformed their typical return – delivering an 8.5% compound annual gain.

So, at the very least, you shouldn’t worry so much! Stocks tend to outperform after new highs, not underperform.

So even though the stock market is up – a lot – over a very long bull market… we still have room to run. A lot of room.

Simply put, we’re not at the end yet. So don’t sit on the sidelines right now. Trust me – you will have plenty of time to do that when we are on the opposite side of the Melt Up.