And the U.S. overall bond market, as measured by the Bloomberg Barclays U.S. Aggregate Index, has returned 8.7%. Both are heady numbers for the respective markets.

1. Are Stocks a Value Based on Earnings?

As I just noted, the S&P 500 Index is up over 27% year to date. And since November 2016 to date it has returned nearly 58%. That’s a big number, so is there enough value not only to defend that performance, but also to justify more through year end and into 2020?

Let’s look at how the sales and earnings are shaping up for the third quarter. So far, out of the 505 stocks of the S&P 500, 484 have reported. And on average, the companies have surpassed market estimates for sales gains by 0.41% and for earnings by 4.37%. That’s pretty good considering that the estimates of Wall Street Analysts tracked by Bloomberg was pretty bearish this reporting season.

And it gets a bit better. Overall average sales are up 3.5%, while earnings, which were projected to drop by 4% or more, are down by only 1.17%. And if we take a look at the compiled projections for the current quarter and those into 2020, we see that average sales are expected to climb along with earnings. Expectations are for gains in sales nearing 6% and earnings approaching gains of 10%. 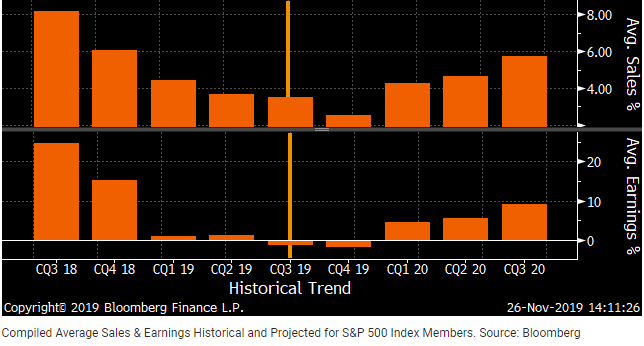 You will notice that this plotted graph is u-shaped for good reasons. First, the drop-off through 2018 into 2019 reflect the fall-off from gains related to the end of 2017 Tax Cuts & Jobs Act (TCJA) which significantly bolstered sales growth and earnings. Now that that’s done, normalcy is returning into 2020 gains, reflecting organic gains in sales and earnings.

But second, I continue to notice optimistic calls by analysts on a regular basis. By posting optimistic numbers, there’s plenty of cover to adjust as time progresses, and in turn they can push out similar, better numbers for following quarters. 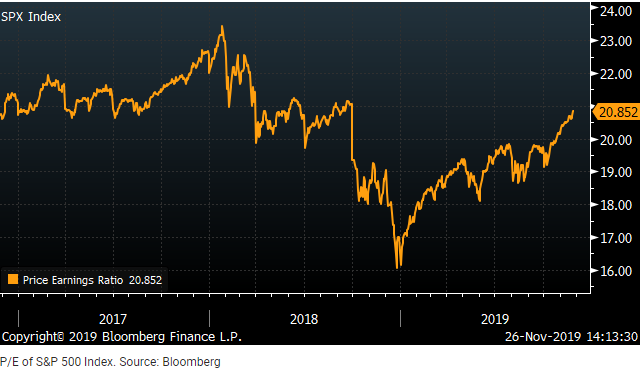 2. Are Stocks a Value Based on Book Value? 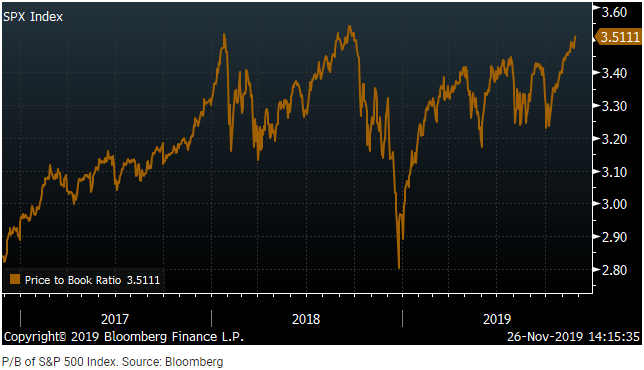 But the key to note about the P/B ratio is to look at what has been happening to net company values inside the index. This shows steady upward progress throughout 2017, 2018 and into 2019 gaining 16.07% from early 2017 to date. 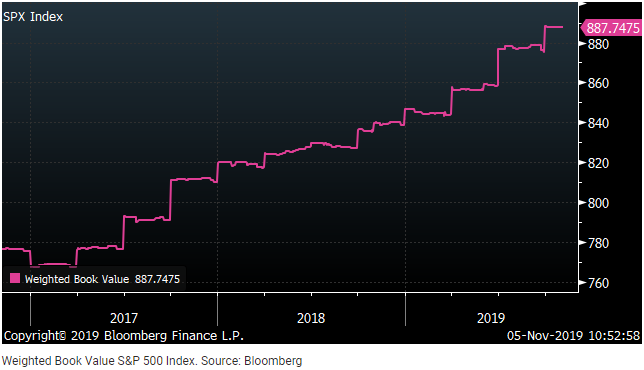 So, the underlying companies have been building up net intrinsic value and not just experiencing stock price inflation.

3. Are Stocks a Value Based on Sales?

Then we come to price to sales (P/S), which again is a better metric than the P/E. Earnings can have a variety of adjustments (unless there’s fraud reporting sales, such as was recently alleged with Under Armour (NYSE:UA, NYSE:UAA)) but sales are sales. 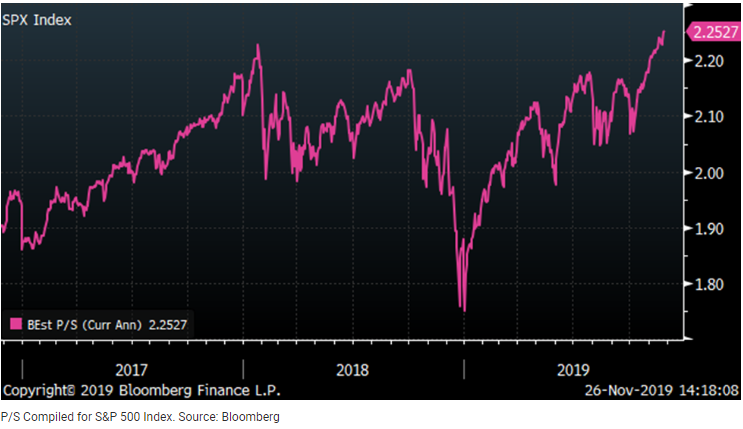 But again, the sales of the underlying 505 stocks continue to show relative steady gains over the past three years. This adds some justification for the market’s pricing. 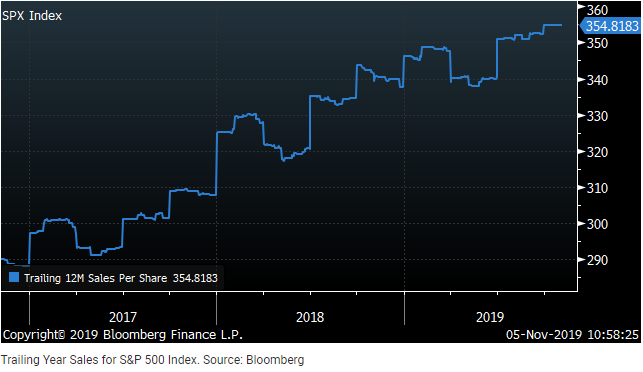 So, while the S&P 500 Index has gained quite a bit, there is an argument for further gains into 2020. And some of the less-growthy segments in the U.S. — largely midwestern manufacturing and agriculture — are set to benefit from Phase I of the potential U.S./China Trade Deal. The results of that deal could bring further gains for those sectors and the companies that serve them. That would add to the underlying value fundamentals of the S&P 500 Index.

But one specific risk to the U.S. stock market has been some more recent more aggressive moves by asset managers buying into more risk-laden stocks while fading the more dependable ones, along with bonds. And this might not just be for their customers and beneficiaries. It might be for the preservation of their jobs as they try to goose up returns into year end. This in-and-out may bring more volatility to the S&P 500 stock prices as we head into 2020.

Now, for my Profitable Investing and the model portfolios inside it, I do not set us up for trading in and out. Rather, I focus on more measured growth across a variety of sectors and stocks along with plenty of dividend income. And I also work hard to provide further measured growth in value along with income from a variety of bond and bond-like investments.

But when I continue to listen to noted major asset managers and analysts talking more about cycling out of more certain investments and into more aggressive without much underlying fundamental evidence to defend the switches — that is unsettling for me.

Adding to the mix are discussions of cycling out of the U.S. markets and into foreign markets including emerging markets. The MSCI Emerging Markets Index is reflecting some of the flow of funds into these markets around the globe. It is still down from April but is up particularly from mid-October. 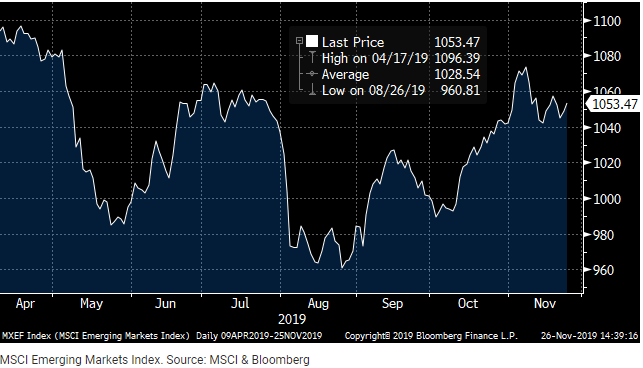 I’m also seeing some trading out of the U.S. dollar into foreign currencies. The Bloomberg Dollar Index is down from recent highs in early September, as some of the flows into foreign markets are dragging on demand for U.S. dollars. 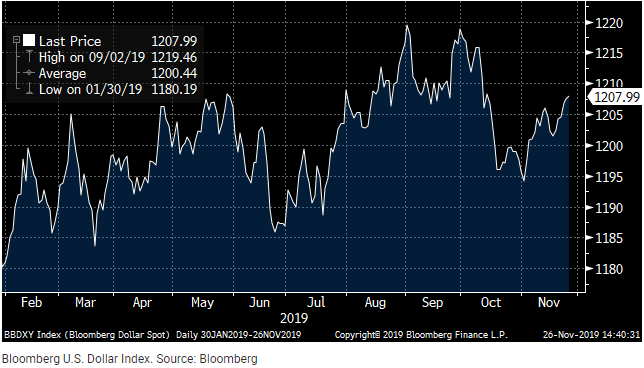 Now, I see a lot of value in many companies outside of the U.S. But that value has come as outside the U.S., growth has been slowing or worse, as many economies are near or in recession. That makes foreign stock prices lower of course. But to buy the foreign markets’ stocks, you have to have a catalyst for growth and prosperity — and I’m not seeing it in meaningful ways.

Sure, the U.S. economy remains in growth mode, but U.S. GDP for the third quarter is running at 1.9%. That’s good, but not go-go great. And it really continues to rely on the consumer to keep pulling the economy along.

And while my preferred barometer of consumer comfort — the Bloomberg Comfy Index — is still very much in positive territory, it took a big pause in last week’s reported number at only 58. 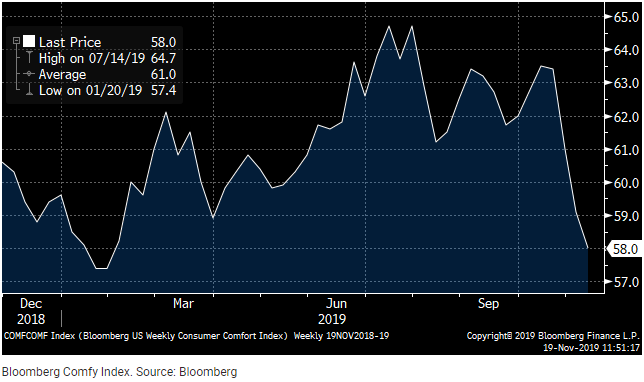 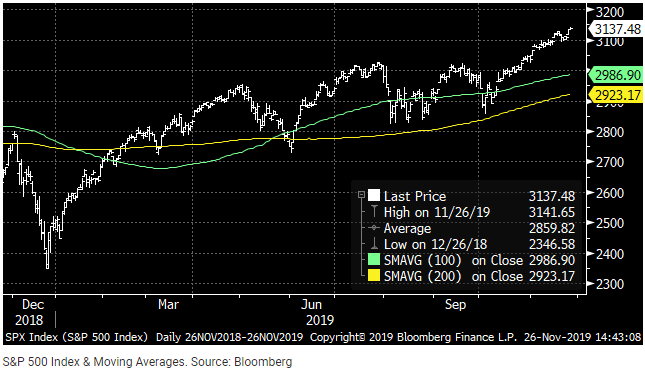 And I’m not seeing trouble right now and into 2020 — other than some exuberance by fund managers and traders. And of course, the consumer comfy levels are worth noting.

While stocks might get most of the headlines, bonds have also seen many great performances over the past year to date. The overall U.S. bond market as tracked by the Bloomberg Barclays Aggregate Index has returned 8.74% year to date.

There are specific reasons for the great return for U.S. bonds. To start, inflation has fallen and remains very subdued. The Personal Consumption Expenditure (PCE) core index is down to 1.67%. This measures the entirety of consumer spending and not just a contrive market basket which makes up the Consumer Price Index (CPI).

And not only is the PCE the preferred metric for inflation by the Federal Reserve Bank and its Open Market Committee (FOMC), but it is the barometer for inflation, which as always is the cancer for bond investors. 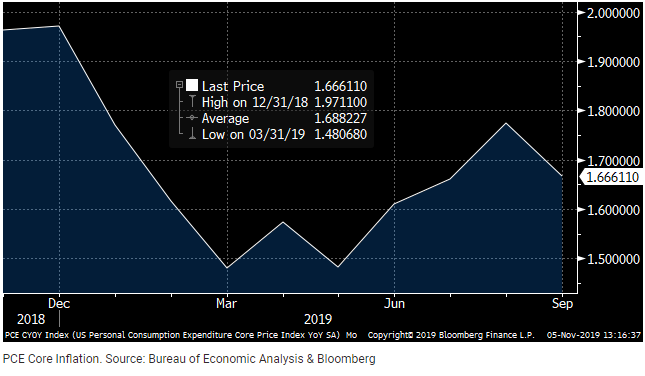 With inflation low and falling, bonds continue to benefit. And the FOMC has stated that it would like to see the level of inflation at least at 2% up to the mid-2% area. This has aided the further monetary easing by the FOMC in reducing the Fed Funds target rate and the rate paid on excess deposits.

And it has further aided the bond market with a new version of quantitative easing (QE) whereby the Fed is buying new rounds of Treasuries as well as providing direct access to repurchase agreement (REPO) refinancing. Repos are when banks and financials borrow money by selling Treasuries and agreeing to repurchase them at set prices. The sell and buy prices reflect an implied interest cost.

In addition, three continue to be waves of major bond buying, with insurance companies, pension funds and other retirement investment funds all in need of bonds with rising liabilities from a growing number of retirees both now and in the future.

Then we come to the problems of the rest of the globe. With Europe and Asia slowing down, or nearing recession, or actually in recession, central banks have driven interest rates into negative yields. That has extended into their bond markets.

Right now, there is some $13.23 trillion in negative yielding bonds outside the U.S. market. 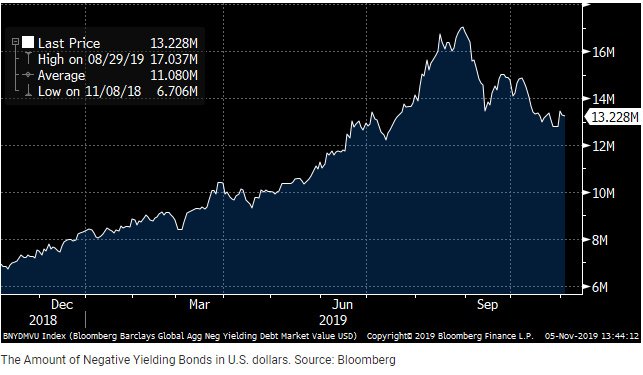 The negative-yielding bonds mean that U.S. bonds with positive yield are all the more attractive for global investors as well as U.S. investors that would otherwise look at foreign bond markets.

The result continues to be a massive net inflow of investment into the U.S. markets, including bonds. It has risen significantly this year through the most recent report as tracked by the U.S. Treasury (note, that there is a significant delay in this report by some months). 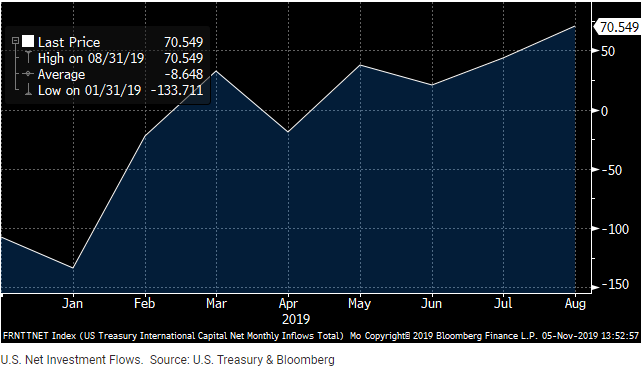 And with expectations for low inflation, a supportive FOMC and ongoing demand, overall U.S. bonds should continue to be well bid by U.S. and global bond investors into 2020.

Then when looking specifically at sectors in the U.S. bond markets, I recommend that you focus your attention on corporate bonds and municipal bonds.

Corporate bonds as tracked by the Bloomberg Barclays Corporate Bond index have returned About 14% year to date.

Corporate bonds continue to benefit from the overall attraction of the U.S. bond markets and from the continued economic expansion in the U.S. which is bringing rising corporate revenues which in turn is improving credit capabilities and ratings for existing and new bonds. And while there are some cracks in the lesser credit sector of the corporate market — the core investment grade continues to be well-supported.

Then for municipal bonds, the market benefits just like for corporates from the overall positive conditions plus some other benefits. To start, with tax revenues on the rise with the expanding U.S. economy, state and local authorities are flusher with less need to borrow. And voters are less inclined to approve a lot of newer issues. This means that supply is more contained and that credit conditions of issuers are all the firmer. Both support higher bond prices and lower yields.

This is showing up with the return for U.S. municipal bonds. The Bloomberg Barclays Municipal Bond Index has returned 7.06% year to date.

With inflation now showing indications for a sustained rise, the FOMC remaining compliance to supportive and underlying demand continuing to thrive for bonds — overall U.S. bonds, and especially U.S. corporates and munis should continue to deliver into 2020.

This New Social Security Scam Could Potentially Ruin Your Retirement