CME Group (CME) – is the parent company of the Chicago Mercantile Exchange and offers futures and options on futures contracts on various products globally. The products offered range from interest rates, equity indices, foreign exchange, agriculture, energy, metals, and others. The company was formerly known as Chicago Mercantile Exchange holdings and was founded in 1898. CME Group is based in Chicago, Illinois.

CME Group has seen its earnings grow by an average of 20% per year over the last three years and they grew by 31% in the third quarter.

Sales have grown by 11% per year over the last three years and they were up 41% in the third quarter.

The company’s management efficiency measurements are a little mixed with one slightly below average and one that is way above average.

Something that really stood out about CME Group is the sentiment toward the stock. There are 18 analysts covering the stock at this time and only six rank the stock as a “buy”. Nine analysts rank the stock as a “hold” and three rate it as a “sell”. This puts the overall buy percentage at 33% and that is far lower than the average stock. 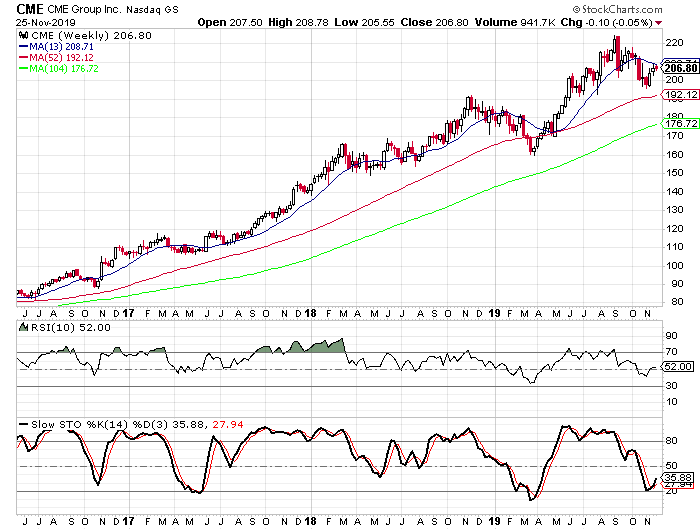 The weekly chart shows how CME Group has been trending higher for the last four years with a few dips here and there. The trend has been so strong that the stock has only closed below its 52-week moving average for two weeks out of the last three and a half years.

One thing that stood out is how the weekly stochastic readings had dipped down near oversold territory but have now turned higher. There haven’t been very many instances over the last few years where the indicators were below the 30 level, but when they were it presented a great buying opportunity for investors.