Alphabet (NASDAQ:GOOG, NASDAQ:GOOGL) is poised for significant growth over the next five years. Several studies show that the trend in digital advertising will significantly grow over the period and these trends will continue to be tailwinds for Google stock.

Google makes 85% of its revenue from digital ad sales. This virtually assures that Google stock will be a great play on that theme over the next five years.

The stock valuation does not seem excessive from that standpoint.

A recent article in Seeking Alpha quotes a forecast study from eMarketer.com showing digital ad sales will exceed $517 billion by 2023. This is up from a forecast of $333 billion this year.

An article in Forbes this summer projected that U.S. digital ad spend will reach $275 billion by 2024.

All of these studies add up to recurring revenue sales for Google.

Google Will Benefit from These Trends 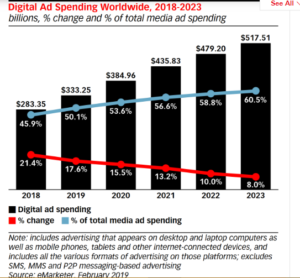 In effect, its operating profit would climb 75% from its run rate of $28.3 billion today. Google stock would benefit from this as well.

For example, all classes of Alphabet stock have a market value today of $906 billion. That puts Google stock today on a value metric of 32 times its run-rate operating profit of $28.3 billion.

Projecting that out to 2024, when Google’s operating profit is forecasted to be $49.7 billion, would put the Alphabet stock market value at $1.59 trillion. To be conservative, let’s call that $1.5 trillion.

Alphabet Stock Will Benefit from Buybacks

Let’s assume this slow reduction of shares outstanding continues by the end of 2024, five years from now. Google would have 10 million fewer shares, possibly more since its free cash flow would have grown at least 75%.

So taking $1.5 trillion market value from above for Alphabet stock’s market value and dividing it by 680 million shares, gives GOOG stock a projected price of $2,205.88 per share. Today’s price is $1,303 per share.

So over the next five years, just from the natural growth in ad sales and slow deterioration in Google’s market share, Google stock will rise by 69.3%. That works out to an annualized compounded gain of 30% per year for five years.

This valuation does not include any contribution from Alphabet’s other revenue lines.

Alphabet Stock Is a Buffett Kind of Stock

This is a thumbnail way of valuing Google. You should always look for ways to simplify your analysis of a stock. In the case of Google, the company has an easy to understand economic moat.

This is the exact kind of stock that Warren Buffett has always liked. But very interestingly, the latest 13F SEC filing by Berkshire Hathaway’s (NYSE:BRK.A, NYSE:BRK.B) does not include any holding in Alphabet.

Charlie Munger, Berkshire’s Vice Chairman, was quoted at the company’s last annual meeting as saying that not buying Alphabet stock was a mistake.

I recommend you don’t make the same mistake. In fact, let’s make the analysis even more conservative. Let’s say that operating profits would be valued at just 25 times, instead of 32 times in the above analysis.

That would give Alphabet a stock market value of $1.24 trillion. GOOG stock would be worth $1,827 per share. That is still 40% above today’s price. The compounded average annual return is still 18.4% annually.

That is a fantastic return on investment over five years, almost twice the historical stock market average.

The Bottom Line on Google Stock

Right now Alphabet stock does not pay a dividend. I highly suspect that over the next five years, given the huge cash flow that Google brings in, it will consider paying a dividend.

In addition, Google may begin faster share buybacks, although that is just my opinion. Apple (NASDAQ:APPL) has been paying dividends and buying back stock aggressively over the past seven years or so. I suspect that Google will follow its lead in this manner as its cash pile grows.

So I would not hold off buying Google stock just because it has risen a good deal. I have shown that the Alphabet stock market value will grow significantly over the next five years. The expected return on investment is anywhere from 18% to 30% annually given my assumptions.