Atlassian (Nasdaq: TEAM) is an application software firm based in Sydney, Australia. The company designs, develops, licenses, and maintains various software products. The focus of the software is project management and workflow management with several different products to offer. The company was founded in 2002.

The management efficiency measurements are also really good with a return on equity of 29.1% and a profit margin of 22.9%.

Another positive for the company is the fact that it doesn’t have any long-term debt.

Despite all of the positive fundamental statistics, Atlassian has a considerable amount of bearish sentiment toward it.

The other nine have the stock rated as a “hold”.

The short interest ratio is at 5.1 and that is higher than the average stock. It is also worth noting that the number of shares sold short has increased from 7.04 million to 9.03 million from August 30 to October 31. 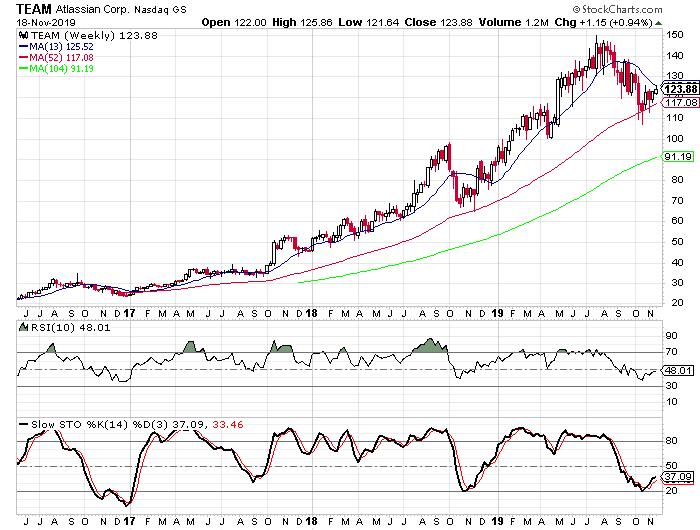 Looking at the weekly chart, Atlassian fell a little from early August through late October. That brought the stock out of overbought territory and in the case of the weekly stochastics down near oversold territory. Over the last three and a half years there haven’t been many occasions where the stochastics were as low as they were in the past month. The indicators have since turned higher and made a bullish crossover.

The other thing that stands out about the pullback is how the stock found support at its 52-week moving average. The moving average acted as support in late 2018 and it looks to be doing it again.