TriNet Group (NYSE: TNET) is a staffing and outsourcing firm based in Dublin, California. The company offers human resources solutions to small and midsize businesses in the United States and Canada. Clients can use TriNet for payroll processing, tax administration, employee benefits programs, and workers compensation insurance and claims management. The company was founded in 1988.

TriNet has seen its earnings grow rather nicely in recent years with average annual EPS growth of 45% per year over the last three years. Earnings increased by 8% in the third quarter and the EPS is expected to increase by 10% for 2019 as a whole.

Sales have increased by an average of 7% per year over the last three years and they were up 11% in the third quarter.

Analysts expect sales to increase by 4.1% for the year.

The one fundamental statistic that jumped out at me the most was the return on equity which is at 75% currently.

That is an impressive ROE and one of the highest I have seen lately. The profit margin is slightly below average at 8.4%.

Looking at the sentiment for TriNet we see that there isn’t much analyst coverage on the stock with only five analysts covering it at this time.

Of those five, three rank the stock as a “buy” and two rate it as a “hold”. The short interest ratio is above average at 4.7 and that is a sign of more bearish sentiment toward the stock.

The weekly chart caught my attention as the stock moved in to oversold territory in late October and has since moved higher for the last few weeks. The pattern is very similar to what we saw in the fourth quarter of 2018, just before the stock rallied sharply. 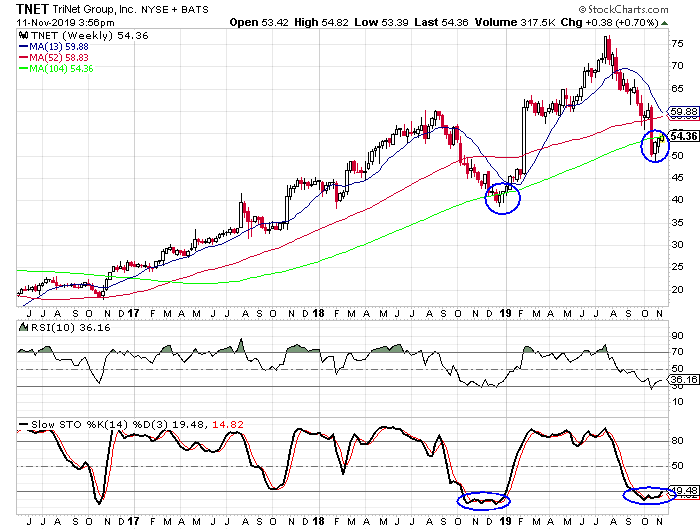 The stochastic readings also look similar to late last year. The indicators dropped below the 20 level for an extended period before they were able to move back above that level.