As a result, we are downgrading Exxon’s Dividend Safety Score from Very Safe to Safe. I plan to continue holding our shares of Exxon in our Conservative Retirees portfolio and believe the company’s dividend remains attractive for income investors.

The downgrade was partly driven by continued weakness in energy market conditions. Earlier this month, Exxon disclosed that weaker oil prices and lower chemical margins will weigh on its third-quarter results, which will be reported on November 1.

Analysts have since reduced Exxon’s earnings estimates for the year ahead by nearly 20%, pushing the firm’s forward payout ratio above 100% for the first time since 2016 (the bottom of the oil crash).

Unfortunately, the profitability of all of Exxon’s businesses are under pressure today, with prices and margins near 10-year lows in some cases.

In light of today’s difficult energy market, most oil & gas producers are hunkering down by reducing their capital investments and returning the bulk of their free cash flow to shareholders via dividends and buybacks.

Exxon has taken the opposite approach, opting to ramp up its spending to take advantage of what it believes are the best investment opportunities it has seen since Exxon and Mobil merged in 1998.

We discussed Exxon’s investment plans in our thesis, but essentially the firm expects to invest more than $200 billion between 2018 and 2025 to significantly increase the output and profitability of its integrated businesses.

Annual capital expenditures are projected to increase more than 50% compared to 2016’s level.

Exxon’s capital expenditures rose nearly 50% in the first half of 2019 compared to the prior year and consumed over 90% of the firm’s operating cash flow. For comparison, Chevron’s (CVX) capital spending grew just 5% over the same period and represented less than 50% of its operating cash flow.

Exxon was left with $1.2 billion in free cash flow, falling far short of the $7.2 billion in dividends the firm paid out through the first two quarters of the year. To help cover this deficit, Exxon will continue relying on issuing debt and selling assets. In fact, management targets $15 billion of asset sales through 2021.

Despite sporting a very high payout ratio and ramping up spending, Exxon’s dividend can remain safe during this time of elevated investment thanks to the company’s excellent balance sheet and scale.

Although Standard & Poor’s and Moody’s both have a negative outlook on Exxon’s strong credit rating due to its higher capital spending plans, you can see that the firm’s primary leverage metrics remain at conservative levels. 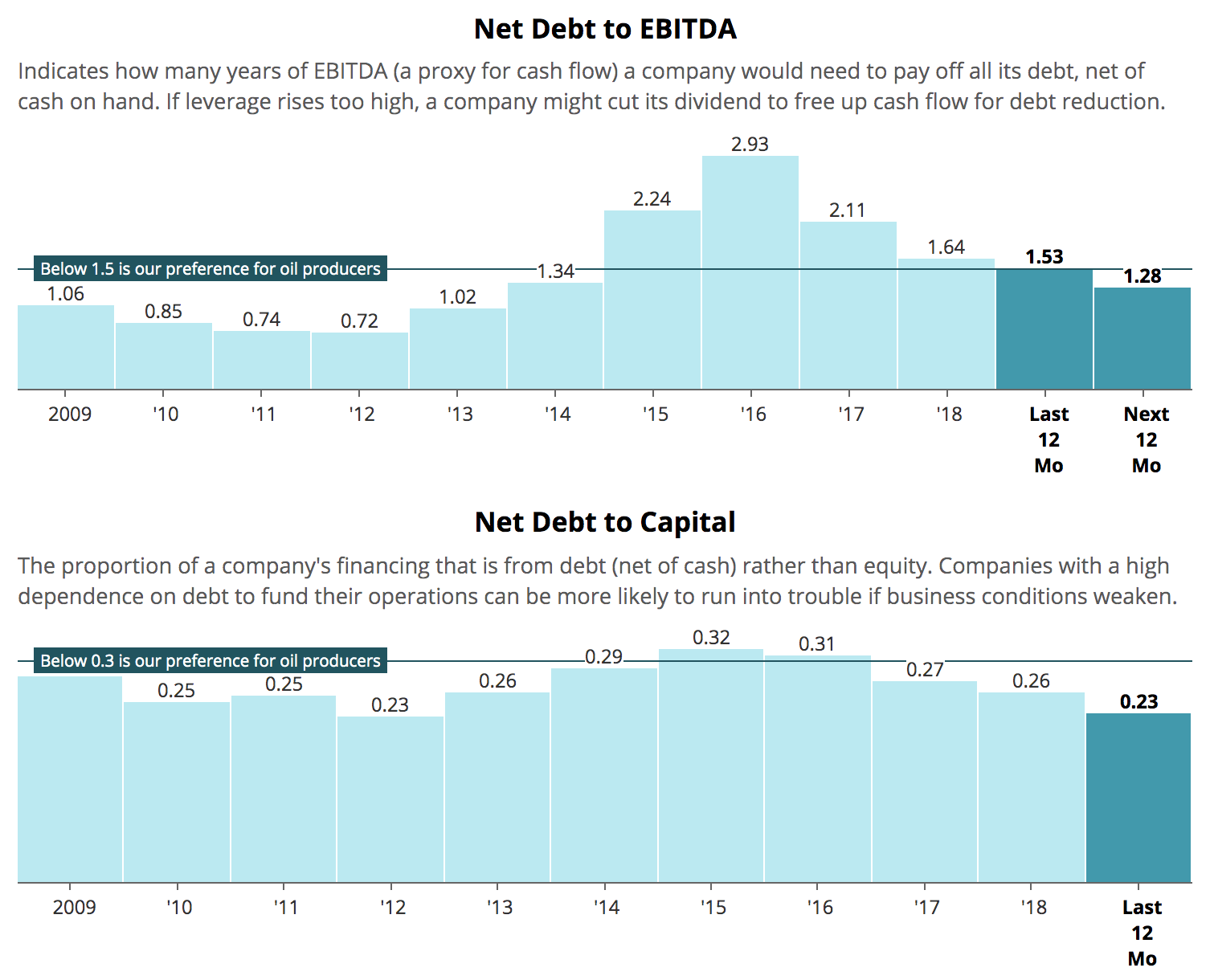 Most of Exxon’s investments will not start generating meaningful cash flow for a couple of years, so Exxon’s conservative balance sheet is important to help it get through this period of higher spending without threatening its dividend.

The company’s growth projects are thus far on track, and Exxon’s financial flexibility remains supportive of the payout, even in these lean times. In fact, at an investor conference in September, Exxon noted that it retains “the capacity for a sizable acquisition without compromising the financial capacity of the company.”

Exxon has paid uninterrupted dividends since 1882 and increased its payout in each of the last 37 years. This trend seems likely to continue for the foreseeable future, even despite Exxon’s uncomfortable payout ratio.

With that said, project execution risk will remain elevated the next few years, and volatile energy markets could further strain Exxon’s cash flow. Fortunately, most of Exxon’s growth projects are expected to have low breakeven rates at oil prices near $40 per barrel when they come online.

But if everyone thought Exxon’s investments were a wise move and likely to generate strong returns on capital in the future, then the stock probably wouldn’t yield 5% today.

I think some investors are skeptical of Exxon’s belief that the industry is underinvesting relative to the supply required to meet future demand.

From the rise of renewables to continued advancements in fracking and the global economy’s pace of growth, there are many variables that will affect the energy landscape over the next decade and beyond.

Exxon’s forecasts, which are influenced by data provided by the International Energy Agency, call for global energy demand to rise 20% by 2040, with China and India accounting for 50% of energy growth as their living standards increase.

Management anticipates the world’s energy mix will gradually shift towards cleaner energy, but oil and gas will continue to play a primary role thanks to their availability, affordability, and reliability.
Source: Exxon’s 2019 Energy Outlook

I can’t begin to guess what the energy world might look like in 2040, but a slow pace of evolution is important to support the long-term returns that Exxon’s investments can earn.

With a safe 5% dividend yield, shares of Exxon provide investors with a healthy payout while they wait for what will hopefully be better times ahead for the company. For now, I’m willing to give management the benefit of the doubt.