Twitter (Nasdaq: TWTR) – most of you are probably aware of Twitter and what the company does, but some may not. Twitter is a social media platform that allows members to share thoughts with others and build followers that watch for your tweets. The company was founded in 2006 and is headquartered in San Francisco.

Twitter is scheduled to report earnings on Thursday, October 24, so if you are a more conservative investor, you may want to wait until after the earnings report before entering any position.

Analysts expect the company to earn $0.20 per share for the quarter on revenue of $874.13 million.

By these estimates analysts expect flat earnings and revenue growth of 15.3%.

Over the last three years Twitter has seen earnings grow by 63% per year while sales have grown by 10% per year.

As for the management efficiency measurements, the return on equity is a little below average at 11.2% while the profit margin is above average at 28.7%.

The sentiment toward Twitter is mixed with analysts rather bearish and short sellers rather bullish. There are 44 analysts covering the stock at this time and only 14 rate the stock as a “buy”. There are 25 “hold” ratings and five “sell” ratings. This puts the overall buy percentage at 31.8% and that is well below average. The short interest ratio is at 2.3 currently and that is slightly below average. 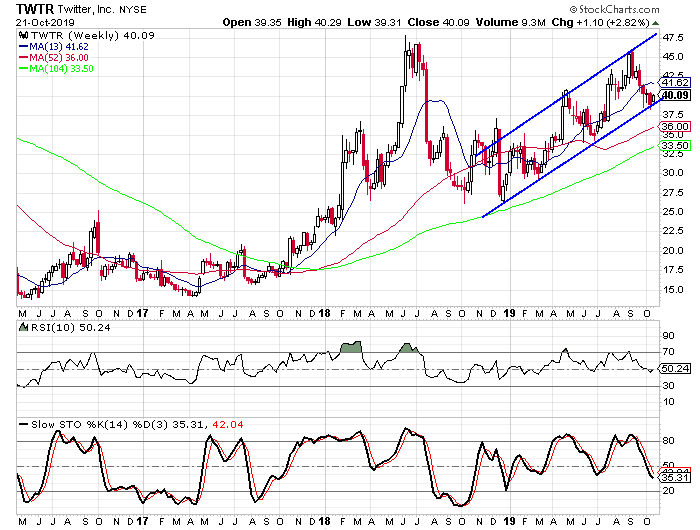 The weekly chart for Twitter shows the stock trending higher within a trend channel since last December. The stock is just above the lower rail of the channel at this time and looks like it wants to turn higher.

I also took not of how the 10-week RSI and the weekly stochastic readings are at similar levels to where they were at the end of June when the stock last hit the lower rail before rallying sharply for several months.